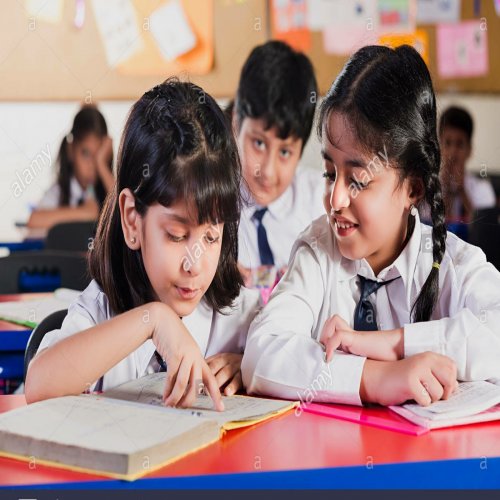 The Andhra Pradesh government has come out with a revolutionary education plan for students from Class I to VI. It has decided to publish what are known as ‘mirror image’ school textbooks in two languages—English and Telugu.

Each book will have the lessons printed in both languages, side by side. This will go a long way in solving the problems faced by students and teachers in government schools where the medium of instruction is English. The experience will make them realise how learning in English is easier compared to Telugu. It is easier to learn English alphabets and sentence formation, too, than any other Indian language.

Those who believed in the saying ‘Desa bhashalandu Telugu Lessa (among the nation’s languages, Telugu is the best)’ never cared to develop the Telugu script to suit the tongue of a child who came from an agrarian family. Most of the written text in Telugu is very different from the Telugu that the masses communicate in while working in the fields. Engaged in their productive activities of life—tilling the land, harvesting the crop, and preserving food items at home and outside—people speak what is known as praja bhasha (people’s language), whereas book writing takes place in pandita bhasha (language of the pandits). The pandita bhasha is nothing but Sanskrit, which never was a field and kitchen language. Even in Brahmin households—where only men are known as pandits—Sanskrit was not allowed to be the home and kitchen language of women. Once that language was dubbed in Telugu letters and imposed on the working class, the mismatch became real. This led to the stunting of children’s creative learning.

English over Telugu
English, on the other hand, evolved in the opposite direction. Till the end of the 14th century, English was primarily a farmer’s language in England, and was not used in church because Greek and Latin were the accepted divine languages, even in the Anglican Church. English evolved and developed in the farm fields before it became a ‘book language’.

It was only after the peasant’s language was adopted as God’s prayer language that English became richer in print and spoken forms. Even German and French prospered after they were accepted as prayer languages. This can easily be called the greatest revolution among Europe’s peasantry. Once a language is accepted as divine, its growth would entirely be different. In Hinduism, Telugu or any other Indian language such as Hindi, Marati, Gujarati, Bengali and so on, is not considered divine even now in big temples. This is yet another reason for the stunted growth of Telugu.

Another major issue that hinders language development is the reluctance of the canon to adopt a new vocabulary. Unless the alphabet is simplified and words from farm fields and tribal areas enter the written text, Telugu or Hindi or Tamil or Bengali will not get enriched. The Andhra government’s plan to introduce ‘mirror image’ textbooks will go a long way in enriching the legacy of the Telugu language.

Semester, a new experiment
The Andhra government is also adopting the semester system in school education from this delayed academic year—another first. It should prove productive in the long run because two assessments in one academic year will ease the burden of performing in a heavy syllabus from students’ shoulders. This is, in fact, a non-European-American model in school education and is worth trying. Unlike the Euro-American model, India never developed a system that could use technology to reduce the weight of heavy school bags. The new system would mean students will have to carry books relevant only to that particular semester.

Teachers need to do a lot more to constantly improve learning abilities and creative thinking among children. The Indian school education system, so far, has stressed on rote learning, which does not encourage creative thinking. For students who would become part of this new experiment in Andhra Pradesh, the process of creative thinking should begin and must grow by the time they finish sixth grade. The ‘mirror image’ books along with individual effort on their part will improve the English of the teachers. That will, in turn, help students. Teachers must realise that there is a teacher in every child.

Teaching ‘dignity of labour’ creatively
The New Education Policy (NEP) proposes to teach students about different vocations from Class VI onwards, in a bid to help them make informed career choices in future. Taking the cue from NEP’s spirit, schools in Andhra need to gradually move to a 5+3+3+4 system, away from the 10+2 model by abolishing Intermediate. The present model provides high school education in a village only up to Class X. But underprivileged students drop out because they cannot go to intermediate colleges—both government and private—in far off cities. The new system allows every student to complete school without leaving the village. Even a small village, which has 50 children, can have a high school up to Class XII. The new system, if implemented across the country, will change the very nature of school education in India.

Children who struggle to focus on studies while living in residential schools in urban centres, away from their families, can better manage the load of high school syllabus. The NEP also extends the duration of all under-graduate courses to 4 years. This is to ensure that every graduating student confidently enters the job market.

Euro-American systems mandate post-schooling of adults taking place away from the family set up. Students should live on their own, irrespective of their family’s economic status. This is one reason why higher education is not affordable to all in many Western countries. In India, this system may not work because of huge economic disparities. Here, we should learn from China — a country that has the same school-going population like ours, but a society and a State that values ‘dignity of labour’, thereby providing equal opportunity.

In India, teaching ‘dignity of labour’ must start by making children kitchen-friendly. Books from Class VI onwards must include theory lessons on cooking, making students realise the importance of the daily chore. Parents must train their children to cook and perform basic household duties, irrespective of the child’s gender. The Andhra government is giving money (Rs 15,000 per year) to mothers as part of the ‘Amma Vodi’ scheme. Such state support would ensure mothers play a positive role in the child’s education.

Schools, during parent-teacher meets, must ask the guardians to teach their children the ‘dignity of labour’ by assigning them various household duties. That’s nothing less than creating a cultural asset and a lesson children will never forget—no work is small and no work is undignified. It should also be the responsibility of teachers to track the students’ progress in learning household work.

Schools should also arrange sessions on imparting basic agrarian knowledge through which students could learn about cultivation. Chinese students learn to soil their hands from the fourth grade onwards. States can adopt their own methods and models to teach and make students practice the ‘dignity of labour’ through such activities. Andhra Pradesh has made a good start. If the state builds upon this and continues to tread this path, it will emerge as the most creatively positive investor and giver of scientific education to its citizens of tomorrow, of whom the country will be proud. #KhabarLive #hydnews