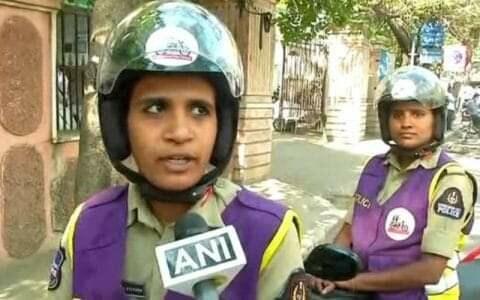 Less than a week after a veterinarian was gang-raped and murdered, women cops revealed how even they are vulnerable to crime and called for more alertness of hostile zones, especially when women are alone.

Citing an example on police women are also not safe, a woman constable of Hyderabad’s SHE Team revealed how four men had teased her, while she was on her way back home after duty.

“Once when I was on my way back home in the city, after my duty hours, four men followed and misbehaved with me. I alerted my colleagues and started going towards my police station. They were caught soon after my colleagues reached the spot,” said the constable.

“I have realised that when in trouble or danger, we must not fold our hands in prayer, we must clench our fists and fight,” she said.

Later SHE team head Shikha Goel said women need to prepare themselves for all situations and mentally practise, how to react in a hostile event.

“Even after all measures taken by cops and others, women need to prepare themselves for worst case scenario, so that the help can reach on time,” said Goel.

“If you are mentally prepared to react, then you will be alert in the event of such incidents. During our weapon training, we were asked to dismantle the weapon and reassemble it again before we would practise shooting. Our mentor told us that we would use weapons in critical situations, and so must be ready for all kind of circumstances,” she added

ALSO READ:  ‍#Sponsored: Gift A Biryani With 'Love With Biryani'

She said that women must be aware of their personal safety and give it as much importance as taking care of the family.
Shakti Sagar, former chairperson CII of erstwhile Andhra Pradesh emphasized that women’s safety was not just a women’s issue, and it was also the onus of corporates and the society to play an active part in making the world accessible to all. #KhabarLive