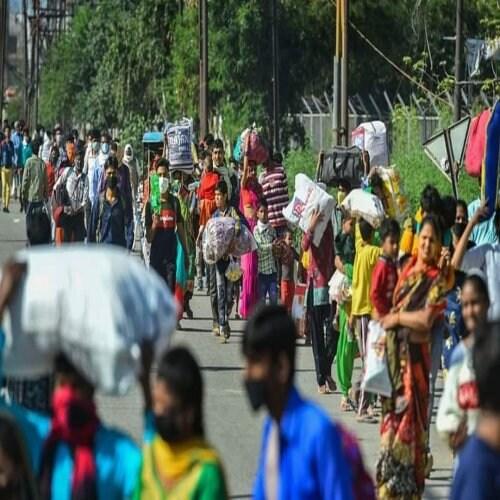 The #CoronaVirus lockdown witnesses major setbacks in normal life. A complete shut down, no work, no food, no shelter makes life horrible to migrant workers in Hyderabad.

Past weeks, migrant workers have been facing a lot of trouble because of the lockdown. Thousands of them tried to return home to their families in their respective states.

Some walked, some crammed themselves into buses and lorries. A few were successful, many were not.

However, all their stories feature the same things — fear for their future and anger at the government for its apathy.

Undoubtedly, the administration, both the Centre and the state, have failed these migrants in Hyderabad. To be sure though, such a surge in the gathering of crowds, unless tackled early, will no doubt overwhelm even the best prepared administrations.

Erramsetti Sai, Raj and Srinivas were among the thousands of people who crossed the Telangana state-Andhra Pradesh border in the past few days. It took them four days to cover the distance between Hyderabad and their village Konthalam in Rolugunta mandal, Visakhapatnam district.

Construction labourers by profession, they were shocked when they were told by their employer the country was virtually shutting down and he had no work for them. They could no longer stay in Hyderabad. From their small tenement at Road No 14, Banjara Hills, they packed up their bags and walked until the Outer Ring Road towards Vijayawada. “A lorry driver agreed to take us to Kodad for some money. From there we crossed over the AP border by walking another 20 km on foot to reach Chilakally,” recalled Sai.

The three men slept by the road near a petrol bunk in Chilakallu. They were stranded there for much of the next day, until they found a shared cab to Vijayawada. Over the next two days, they walked for some distance and boarded another lorry to reach Narsipatnam. They walked the last 20 km to their home.

“It was a miserable journey. None of us had any food. Luckily, our friends told us to contact some activists in Hyderabad. They contacted some other volunteers in AP who delivered some food to us,” said Sai.

The troubles for the three men didn’t end there. The people of their village have enforced a 14-day home quarantine on them. They have no money left to buy food and there is no work. “My family won’t survive if I don’t work. I don’t know how we will manage. I spent all my savings just getting here,” said Sai.

Not all journeys were even as successful as Sai and his friends. For Rajender Yadav and 29 of his friends from Jharkhand, their attempt to reach home was an expensive mistake.

Rajender who hails from Deori in Giridih district, Jharkhand, and the others rented a bus in Hyderabad to take them home. Chaat and juice sellers and restaurant workers based in Abids and Chikkadpally, couldn’t stay on.

They were able to get a letter from the Chikkadpally police which allowed them to travel. “We sat in the bus for nine hours and reached the Chhattisgarh border. There, we were stopped by that state’s police. We were told the district administration would give permission for our further travel,” he said.

The 30 men waited for eight hours at the border, without food, water or information. Eventually, they were asked to head back to where they come from. Luckily, they still had the bus at their disposal.

“The permission letter mentioned the bus’ registration number, so no one else could transport us. If this bus wasn’t there, we would have had to walk home,” he said.

The men were clutching their stomachs throughout the ride. “We had exhausted our food. We didn’t have anything to eat or drink. I had never felt such hunger before,” he said.

Right now, the men are left with meagre savings. Yadav, for instance, has Rs 5,000 left with him. “This money will run out in a few days. But I have to save some money for the trip to Jharkhand when they allow it. I have no idea how I will survive,” he said.

There are thousands of others stuck in the city, many from Bihar and Jharkhand. Most of them didn’t dare a trip to their native villages, in spite of their troubles here.

Anil Yadav of Gortoli in Jharkhand, has been stuck with 22 others from his state in small tenements in a building in Uppal. They, like most others from the state, work as restaurant workers and fruit sellers. They have had virtually no business since the historic Janata Curfew (March 21). They have been cooped up in their crowded homes since then; social distancing is not an option for them.

Anil Yadav said, “The police refused to give us permission to go home. They said we wouldn’t be able to reach our villages since the other states on the route could stop us at the border.” The men briefly contemplated walking to Jharkhand but decided against it.

“We realised we had very little food or money. We took a loan from a money lender we know. However, we haven’t been able to buy any food,” he said.

Struggling for options, they contacted their association of Jharkhand-based migrants who pleaded the Uppal police and GHMC division to supply the men food at their home. On Saturday morning, they got three bags of rice (total 75 kg) and some vegetables.

Like most migrants, they felt upset at being forgotten by their government. Yadav demanded to know why the government was organising flights for NRIs to facilitate their journey home, but not them.

“Why can’t the Jharkhand government or Telangana state government organise buses for us. If they can do this for NRIs, why not us? Are we less important to them?” he asked. #KhabarLive