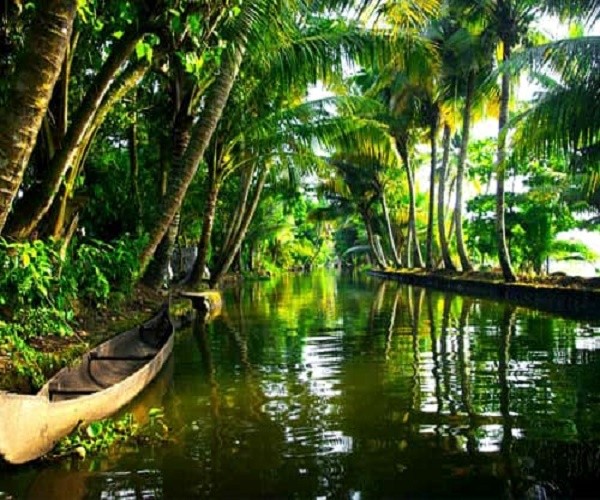 Go on a road trip to Kakinada, an idyllic coastal town in Andhra Pradesh this monsoon and discover the magic of Konaseema, the swaying coconut trees and the emerald green backwaters.

Sory goes that there was once a powerful asura (demon) Tarakasura, who was at war with the gods and thanks to a boon, he could only be killed by a son of Shiva. So, there began a battle between him and Kumaraswamy, Shiva’s younger son and Ganesha’s brother. But, at every deadly blow, the rakshas, Tarakasura would reform limb to limb from his cut off body parts. This power to form again came from a Shiva Lingam that the demon wore.

And the only way to destroy him was to break the lingam first. Eventually, there came to be five pieces of this Shiva lingam and they fell in five different places in Andhra Pradesh. Temples were then built in those locations around the fragments. Those five ancient temples now constitute the Pancharamam Kshetras and of these, two are just outside of Kakinada.

Kakinada, though no tourist destination like Kerala, where houseboats abound aplenty on the backwaters and also often overlooked in favour of its more popular neighbour Rajahmundry, is the perfect place to enjoy the lush bucolic countryside of Coastal Andhra and the Godavari river. Here you will find a steady stream from the River Godavari keeping you company as you drive along the tree-lined roads. Not to mention ancient temples, beautiful beaches and artisan villages even. Making, Kakinada just the place to explore Konaseema, the land wedged into a Kona (corner) surrounded by water, one of the most fertile deltas of South India.

To continue the story, the five fragments of the mythic Shiva Lingam were installed and worshipped at five temples by five gods, Indra, Surya, Chandra, Vishnu and Kumaraswamy. The Shiva Lingam in Samarlakota and Draksharamam – the two temples near Kakinada – were installed by Kumaraswamy himself and Surya, the sun god. All the pancharamam temples are stunning two-storeyed stone temples with massive Shiva Lingams, and these two are no exception. They are beautiful, peaceful and not too crowded.

Besides the two temples on the Pancharaamam circuit, there is also the peaceful Uppada Beach and the Coringa Wildlife Sanctuary here. The Coringa Wildlife Sanctuary is one of the largest stretches of mangrove forests in the country. Go here not just to spot endangered species of birds but also river otters and Olive Ridley turtles. The Uppada Beach, along the road connecting Kakinada to Uppada itself, is surprisingly clean in spite of being less than ten minutes from the city of Kakinada. One can extend their trip to the beach by driving a little further ahead on to Uppada for a little bit of shopping. Here is where the famous handcrafted Jamdani silk sarees come from and it is always a good idea to buy directly from the artisans.

But, the most favoured detour from Kakinada remains the pilgrim town of Annavaram. Only forty-five kilometres from the city, it takes less than an hour to reach the temple that is second only to Tirupati in terms of popularity. The temple sits on a small hill called Ratnagiri, and is dedicated to Satyanarayana Swamy, a form of Vishnu, that all Hindus worship at weddings, housewarmings and all the important social occasions in one’s life. And, at the end of the trip don’t forget to bring back a box of Kakinada Kaja, that scrumptious wheat pastry fried crisp and soaked in sugary sweetness. #KhabarLive