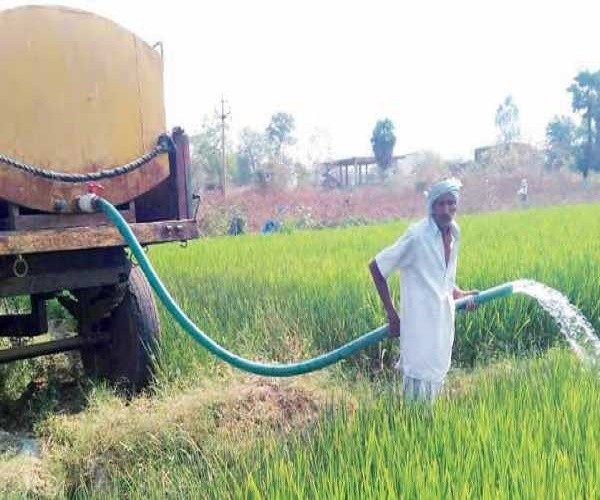 Blame it on the 24-hour power supply to the agriculture sector which is bringing down the groundwater levels or the lack of irrigation facilities, farmers from Velichala village in Ramadugu mandal of Karimnagar district are forced to hire water tankers not for drinking water or household needs, but for irrigating their paddy fields.

Ettem Mallaiah, a tenant farmer who took one-and-half acre land on lease, had cultivated paddy in one acre of land and maize in 20 guntas. Due to non-availability of water, the maize crop had withered and now he is putting an all out effort to save the paddy crop. “There is no other option left but to hire a water tanker everyday for `500 for irrigation needs,” he said.

Almost every farmer of Velichala village are facing similar situations and are forced to hire tankers for their agriculture needs. According to sources, there is about 500 acres of cultivation land in the village, including Guddelapalle and Kistrampalle habitations.

Each farmer in the village had spent over `1 lakh on farm inputs.

The five ponds and two tanks that were constructed under the Mission Kakatiya scheme are now filled with bushes and other weeds due to lack of water in the area. Villagers say that though the foundation stone was laid for sluice construction, nothing has been done so far.

ALSO READ:  Is Hyderabad Air Pollution Getting Worse Than Delhi?

Distressed farmers alleged that officials are not visiting their village to assess crop loss. They requested the government to send authorities for crop damage/ weathering assessment. #KhabarLive