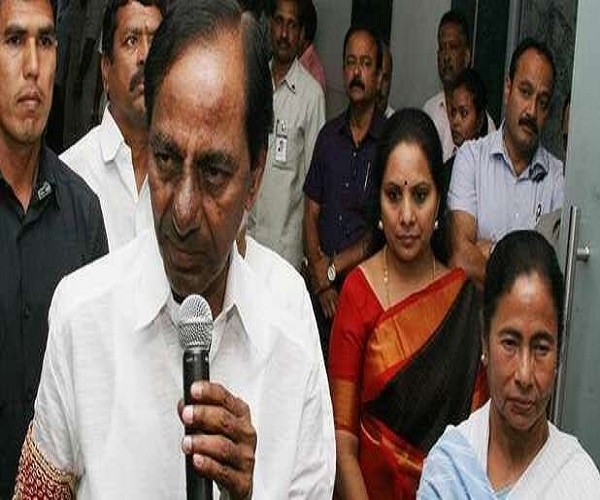 The word ‘federal’ is once again being bandied about by none other than the Chief Minister of the newly-created Telangana State, K Chandrashekar Rao, who is raising the banner of a ‘federal front’ of major regional parties, which will pose an alternative to the two dominant political parties in the country i.e., Congress and BJP. But history is a witness to the fact that no coalition government at the Centre has ever been formed in India without one of the dominant political parties supporting it, even from outside.

And this is not the first time that such an idea is being toyed upon, given the fact that Naveen Patnaik, the popular four-time Chief Minister of Odisha, had raised it at the time of the 2014 Lok Sabha Elections.

Thereafter, the issue went into hibernation, and is now once again raising its head, to draw the attention of the politically conscious citizenry of the country, just before the next Lok-Sabha Elections of 2019.

Even before that, during the years 1996-1998, when the country had the United Front coalition government formed by 13 political parties of India, one witnessed the talk of the ‘federal idea’ to such an extent that the Central government was projected as superfluous, with a slogan like ‘Federalism without a Centre’ venting the air.

This term ‘federal’ was in vogue even on two earlier occasions i.e., once, at the time of the formation of the Janata Party in 1976 with the merger of four national parties i.e. Jan Sangh, Lok Dal, Congress (Organization) and Socialist Party. The merged entity had almost come to be christened as the ‘Federal Party of India’ but for Morarji Bhai Desai’s assertion that the word ‘Janata’ was more appropriate, in order to give the people their due for their historic verdict at the 1977 Lok Sabha hustings, throwing the dominant a 30-year-old monolithic Indian National Congress out of power and ushering in the Janata Conglomerate.

The said government under the leadership of Morarji Desai as the Prime Miniter and Charan Singh as Deputy Prime Minister was formed under the inspiration of Lok Nayak Jaya Prakash Narayan and Acharya J B Kripalani, though for a short spell, and then lost power but not without achieving the goal of ending a dominant single party rule at the Centre.

The earlier experiment of the Samyukta Vidayak Dal (SVD) governments in 6 States in 1967, under the inspired leadership of Dr Ram Manohar Lohia, definitely helped in moving towards a two-party system, if not a multi-party system in the country, which itself was a major democratic advancement.

One other factor, earlier, unknown to the history of India, has been the effect of liberalisation and the coming into existence of the WTO, on the federal structure since the 1990s. The commitments of the Central government to the World Trade Organisation, under several multilateral agreements, took a toll on the State’s powers and its autonomy, so much so that some of the sound recommendations of the Justice R S Sarkaria Commission (1984) became meaningless in the changed global scenario of shrinking national sovereignty.

The usage of the term ‘Federal Front,’ mouthed by the Chief Minister of Telangana may not auger well with many of the federal-minded citizens, since he himself or for that matter his much sought after ally, the Chief Minister of West Bengal, Mamata Banerjee, nor their respective parties i.e., the Telangana Rashtra Samithi (TRS) or the Trinamool Congress (TMC) fulfil the necessary ‘federal credentials’ to raise the banner of federalism at this critical juncture of nation’s political history.

Federalism when reduced to its bare essentials would mean ‘decentralisation & devolution of powers’ from top to bottom of the pyramid of power. The question that then arises is how have these two votaries of the ‘federal front’ acquitted themselves, when tested on the anvil of the twin-tests, just mentioned. In the light of the loud protests of these new champions of federalism, against increased centralisation and denial of autonomy to the States, and robbing them of their ‘sovereign powers,’ it would be in the fitness of things if there is a ‘Federal Code’ evolved to qualitatively and quantitatively measure the process of decentralisation and devolution of power from the Centre to the States and in turn to the local Self-Governments.

On this score, perhaps Chandrashekar Rao, as one who had led the Telangana statehood movement since 2001, until its creation as the 29th State of the Indian Union in June 2014, has the necessary vision to realise as to what the formation of a State without any of the powers promised and envisaged in the Indian Constitution means or it may be the ‘political unconscious’ of the Hyderabad State that is manifesting through K Chandrashekar Rao, as between 1946 and 1948, the then Nizam’s Dominion was outside British India and bound by the Law of Paramountcy and was deprived of participation in the Constituent Assembly Debates, when the Government of India Act 1935 was being reviewed, so as to come up with the New Constitution of 1950.

And now his fight for greater autonomy for the States, to make them stronger, is thus a logical corollary to the separate statehood movement, for which he had the privilege of leading, in a historic struggle for self-rule and self-determination for the people of Telangana. The formation for the federal front may be the unfinished job of Rao at this juncture.

Going back in history, the concept of ‘federalism’ was introduced in British India with the enactment of the Government of India Act, 1935, although one can trace the strains of this concept to the Charter Acts of 1833, 1861 and thereafter the 1909 Act, the 1919 Act and finally after two Round Table Conferences, the 1935 Act, which for the first time divided the ‘sovereign power’ between the Central and the Provincial Legislatures and Governments, thus dividing the power between the two legislatures in the form of lists or subjects, under the exclusive domain of each other. In fact, the Federal Court of India had come to substitute the Privy Council, as the highest judicial body to hear appeals from the State High Courts.

Pausing here for a moment, it is pertinent to mention that, in between came the demand of the Tamil Nadu government under the leadership of M Karunanidhi for State autonomy in the form of Justice Rajamannar Report of 1971. This was followed thereafter by the Justice R S Sarkaria Commission Report on the Centre-State relations of 1984, appointed by Indira Gandhi, after returning to power in 1980 at the Centre.

The word ‘Federal’ doesn’t find mention in the Indian Constitution, although the apex court in the matter of S R Bommai (1994) upheld federalism as the basic structure of the Indian Constitution. Perhaps, the founding fathers of the national parchment were hesitant to use the word ‘federal’ in the face of nearly 550 Indian States merging into a ‘Union of States,’ and they wanted to rule out any possible threat to that Union from the Indian States, some of whom were clamoring to call themselves ‘sovereign powers’. The formation of a ‘Union of States’ was definitely not a ‘unitary one,’ which would in any case not suit a ‘plural and diverse society’ like India.

But, much water has flown not only in the Ganges but also the Cauvery, for India, to fear any such threat of ‘breaking up’ under the pressure of any centrifugal forces in operation, in the Indian body-polity at this point of time in history. The Indian Constitution makes for unalterable, immobile external boundaries, while making allowance for alterable, mobile internal territories, which goes to prove the internal political resilience to withstand all pressures without any fear whatsoever.

Now, within the said fixed boundaries of the ‘Indian Union,’ and its Constitutional framework, is set the theater of federalism, for the actors to play out their respective roles, for an equitable distribution of ‘sovereign power’ between the Centre and the States, with regard to the lists or subjects assigned to each of them in the VIIth Schedule of the Constitution and each being sovereign in their respective spheres. #KhabarLive