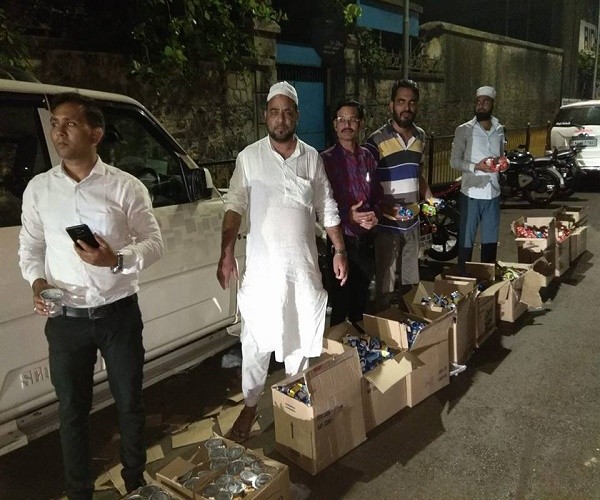 They distributed biscuit packets and kept water tankers ready. The headlines in English national newspapers would have us believe Mumbai cared only about office timings and traffic disruption as an estimated 35,000 farmers marched into the city on Sunday, walking 180 kilometres from Nashik.

But, across the city, individuals, resident welfare associations, religious groups and political parties lined up the roads to welcome them and feed them.

“Since yesterday there has been so much help that an entire truck we had brought is still full of food and will last us another four days,” said Kisan Gujar, state president of the All India Kisan Sabha. The farmers association, which is part of the Communist Party of India (Marxist), has organised the protest to demand loan waivers, the implementation of the Forest Rights Act, updated land records, and better crop prices.

A truck carrying food supplies had travelled with the farmers along the Nashik-Mumbai highway. They had halted periodically to cook their own food. “We did not ask anyone for help. We had come prepared to manage on our own.”

At major junctions on the highway, both rural and urban residents had come out in support of the farmers, supplying them with water. When the protestors reached Mumbai in the blazing humid heat on Sunday, this scaled up, with various groups not only distributing water, but also poha and biscuit packets. Resident welfare associations called for water tankers, in case the farmers needed more water.

Late on Sunday night, in an attempt to delay the marchers from arriving at the Vidhan Sabha as they had planned on Monday, the government appealed to the organisation to either stay in Somaiya Grounds in suburban Mulund or reach the southern part of the city before morning. This was because Class 10 and 12 students were to appear for board exams on Monday.

At around 2 am, the marchers began to walk once more, covering 20 km to Azad Maidan in south Mumbai. When they passed Byculla at around 4.30 am, residents were ready to distribute water, dates and biscuits.

Even on Monday morning, local worker organisations brought in breakfast and water for the protestors who had walked around 30 kilometres each day. Meanwhile, Mumbai Mirror reported that a group in Jogeshwari in the city’s western suburbs have started a call for citizens to donate footwear for the marchers.

The marchers have a mixed bag of demands. Many of them are Adivasi farmers from Nashik, Ahmednagar and Thane in western Maharashtra, who are demanding the implementation of the Forest Rights Act as well as better prices for their crops.

The Maharashtra government has promised to meet the protestors at 2 pm at Azad Maidan, where they are currently camping. If the government does not accept their demands, Gujar said, the marchers will then definitely move on to Vidhan Sabha.

“For now, people are tired after walking through so we are letting them rest. After that, we will be ready to march on Vidhan Sabha.” #KhabarLive