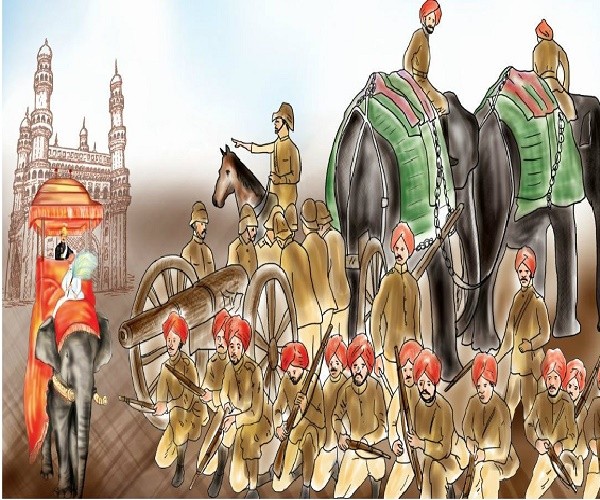 Once the stables of elephants during the second Nizam’s reign, Feelkhana today is a hub for traders. To an outsider, Feelkhana might not sound significant in any way except for the peculiar name. But in that name hangs a tale. Elephants used to be kept here during the Asaf Jahi period, which is how the area got its name; ‘feel’ meaning elephant. Camels and elephants would be tied in their stables here during the second Nizam, Nawab Mir Nizam Ali Khan’s reign.

Since it was in the north-east side of Musi river, there was a lot of open land around where tents were erected for the camel sellers and traders.

Sometimes, these tents would be left there long after the trading had been done. Only elephant sellers stayed and did their business in Feelkhana, with adjacent localities being used for other animals.Oontwadi was used as stables for camels. During the rule of Nawab Mir Mahboob Ali Khan, his royal procession included a beautifully decorated elephant from this area.

The elephant would be accompanied by chobdaars (mace-bearer) and lancers. The courtiers followed the procession on horses.

In fact, in those days no felicitation would be complete without a ride on an elephant. They signified the status of a person, whenever a nobleman was felicitated on his appointment as a minister (Sadr-ul-mahaam), he would return from the Darbar atop an elephant. Well-adorned elephants were often used in the langar procession, on the tenth day of Muharram and Dasara.

English guests would take in the sights of the city riding them and youngsters from affluent families used them to go to bazaars and places of interest.

It was a tradition in funeral processions of eminent citizens to include an elephant with a wooden dola (wooden corpse box) on it. Baked bread (tandoori roti) would be kept inside the dola which was distributed among the beggars.

In Feelkhana, each elephant was sold at a high price of Rs 10,000-Rs 12,000. Apart from elephant trade, royal elephants were also kept here, their expenses borne by the government. If one wanted to hire an elephant for any purpose, one had to take the permission of the government.

The floods in the Musi in 1908 completely destroyed Feelkhana. Later, works began to restore and develop it along with other areas during the period from 1914 to 1919. Currently, it is a thriving business centre of retail and wholesale markets. The mohalla is connected to Begum Bazaar, Siddiamber Bazar, Afzal Gunj and Goshamahal localities. #KhabarLive