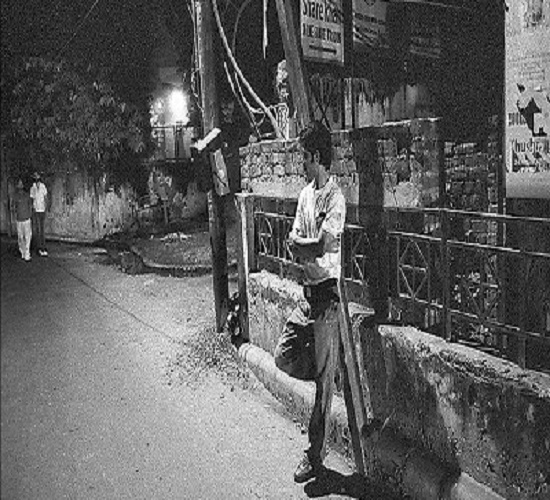 Male prostitution, both forced and voluntary, is a reality that is
often forgotten in the discourse on gender rights and issues. #KhabarLive throws light on the lives of male sex workers in the
country.

As the clock strikes seven every evening, they get down to
business. Plain-clothed men, who look just like any other
bystander on the road, await their clients. Picked up by women who
drive luxury cars, or catering to men looking for cheap sex, they
live a clandestine life satisfying the needs of both sexes. Meet
Hyderabad’s male sex workers.

Shady, deserted areas, empty spaces behind buses, parks, metro
rail construction sites and the railway station are the usual hubs
of sex trade in the city. From gigolos to massage experts,
masseurs or escorts, these men sport diverse looks apart from
contrasting economic and educational backgrounds.

Most male masseurs on the street are trafficked from rural areas
of Uttar Pradesh and Rajasthan and other states of India to work
in the metros. They are mostly illiterate or semi-literate. A
deeper probe into the lives they have left behind more often than
not reveals tragic tales of neglect, discrimination and abuse.

There is also a second group known as male escorts, who offer
direct sex (not massage services) and, in most cases, belong to
the city they operate in. They are usually literate and cater to
high-profile clients.

According to Krishna Naidu of Suraksha Society, a Hyderabad-based
organisation that works with people of alternative sexuality,
there are nearly 50,000 sex workers in the state of Andhra Pradesh
alone. However, the number of male sex workers among these is not
known.

Naidu says that many boys and young men who join this work live
stigmatized lives, with little or no educational opportunities,
earning very little by offering massage services and selling their
bodies.

Archana Rao, a development communication specialist who has worked
extensively with sex workers from across India, says some of these
boys have been abused as children. “The psychological impact on
these kids or men is huge” she explains.

According to a United Nations report, certain Indian traditions
and customs also have a role to play in the perpetuation of male
sex trade. The report “Traditionalising male prostitution in
India” says that boys in the age group of 15 to 25 with a feminine
demeanour migrate to Bihar and Uttar Pradesh from various states
to perform what is called the ‘Launda naach.’

Launda dancers define and spice up entertainment during marriages
in the Hindi heartland, especially in Bihar and UP, where weddings
are elaborate affairs with a rustic dose of merry-making,
drinking, music and dance. Launda dancers are predominantly
effeminate men, dressed in women’s attire.

ALSO READ:  Why 'New Secretariat' Is Important Than 'Corona' To Telangana Chief Minister?

The Laundas (young boys) are hired by poor families as they cannot
afford “more expensive” women dancers. The dancers mainly belong
to lower middle-class and poor families of West Bengal, Bihar,
Uttar Pradesh and Maharashtra while some hail from Nepal and
Bangladesh. They come to Bihar and UP during the peak marriage
season between April and June in summer and from December to
February during winter.

These dancers are very vulnerable to physical and sexual assault.
They are often bitten or stubbed by those who come to watch them –
men with carnal instincts. “A group of 10 to 15 men could
physically carry a dancer to a field and gang-rape him. And, this
is a very common trend. Resistance only leads to greater torture
and sometimes even death,” the report reveals.

While there is huge demand for young men in male sex trade, and
many are forced into it by circumstance, interestingly, there is
also a population of male escorts (paid highly by female clients)
who voluntarily take a plunge in sex trade.

With the commodification of men surging in recent times through
advertisements in newspapers, social media and movies, there has
been a concomitant, silent surge in male sex trade.

According to a survey by the Sambhavana Society that works with
male sex workers in India, many masseurs and escorts opt for sex
work as it promises easy money or “pocket money” which helps them
gain financial stability, support their families, or pay for
education. Some boys who are forced into sex trade via trafficking
or child labour also end up living this life for the money, the
survey explains.

Female clients from affluent families are the ones who usually
seek such mobile masseurs or escorts. “Their demands dictate the
way the escort must dress up or pander to their sexual fantasies.
Apart from pleasure, these men are also showered with gifts and
large sums of money,” says Archana, adding that massage centres,
sauna hubs, spas have become notorious for sex trade. Pubs are
also common places where women come looking for masseurs.

According to Munna (name changed), a bisexual who operates in
Hyderabad, women interested in men contact him after seeing an
advertisement in a newspaper or the online space. “We exchange
phone numbers and get called. Depending on the client’s demands,
we check the escort’s availability and fix a price and place,” he
says, adding that the payment could go up to as high as Rs 1 lakh.

Many of these groups also have online groups or communities on
social media. When asked about escort services, one of the members
from the Delhi Male Sex Workers Association said: “These pages on
Facebook or other social media are just congregational points for
clients looking for pleasure. We only exchange contact details
online. The real transaction happens offline, after the payment
has been made online.”

Pimps offering escort services can sometimes give the client an
“NRI choice” too. This means if a female client is looking for an
NRI, the pimps try to meet the requirement. Interestingly, a
network of pimps stationed at airports, bus stops and railway
stations keep tabs on NRIs and approach them, if they are ‘out of
stock.’

It would, however, be wrong to assume that all males in flesh
trade are generously compensated and are driven by the lure of
lucre. A vast number is forced into the business and paid
pitiably, not to mention the abuse they endure. Indeed, as Zaara
(name changed), a transgender in Old City of Hyderabad says, the
“per session” charge could be as low as Rs 10, going up to Rs 400
-500. “Unfortunately, our make-up cost alone could exceed what we
earn, because we have to dress up the way the client wants,” she
quips.

Differentiating female sex trade from male sex trade, Naidu says
that the existence of female sex trade is well-known and has
always been rampant. However, the demand for male sex workers is
gradually rising as sexual attitudes are fast changing. But the
lines are sharply drawn.

“Sometimes, female sex workers criticise male sex workers for
charging less. But, that’s how the industry is. They always tell
the men (sex workers) that they have brought sex trade to a very
low level (in terms of earning potential),” he adds.

Many of these mobile sex workers are homosexual or bisexual,
forced into the trade by lack of social acceptance of their sexual
orientation. Take the case of Zaara. Dressed in a black dress with
a red border, her face lit by the sunlight streaming in through
the door, she narrates her story of trauma and stigma in a husky
voice.

“I loved dressing up like a girl ever since I was a child. I
started realizing that I was effeminate and different from others
when I was in the eighth standard,” says a shy Zaara, whose name
was Mohammed Afzal until her sex-change operation three years ago.

Born in a conservative Muslim family, Zaara was never an
“accepted” child. “My parents paid my school fees but always felt
ashamed of me and considered me a source of shame. They always
told me I’m a Hijrah and was responsible for spoiling other kids
at school,” reveals a moist-eyed Zaara, who dropped out of school
after the ninth standard due to family pressure and constant
bullying by her classmates.

The misconception that male sex trade doesn’t exist at all also
persists among many. “This misconception actually protects male
sex workers sometimes, because when there is a crackdown by
police, only the female sex workers get framed while the men get
away with it,” says Archana.

Data from Human Rights Watch says there are over 20 million
prostitutes (predominantly female) in India. Of these, nearly 35
per cent enter the trade between 12 and 18 years of age. The
trafficking industry in India is estimated to generate $4 billion
a year and has at its core, investors, unscrupulous recruiters and
corrupt public officials as principal participants.

The law governing sex work – the Immoral Trafficking Prevention
Act (ITPA) — considers trafficking, abduction and forced
prostitution of any minor or adult (male or female) illegal. It
treats rescued girls or women as victims and has provisions for
providing them shelters. But given that there is no accurate data
on male prostitution in India, it is tougher to protect male sex
workers from violence or abuse, says Naidu.

Apart from male sex work being under wraps, there is also little
conditioning towards identifying and serving this population of
marginalized boys and young men. They exist almost as in a blind
spot. As a result, male sex workers are often doubly victimised –
first by the circumstances that force them into the trade, and
secondly by the lack of any institutionalised effort to protect or
rehabilitate them.

Meanwhile, their lives go on, as in a play. “Most of them work in
some other capacity during the day and transform into a completely
different person at night as an active participant in male sex
trade,” concludes Archana. #KhabarLive