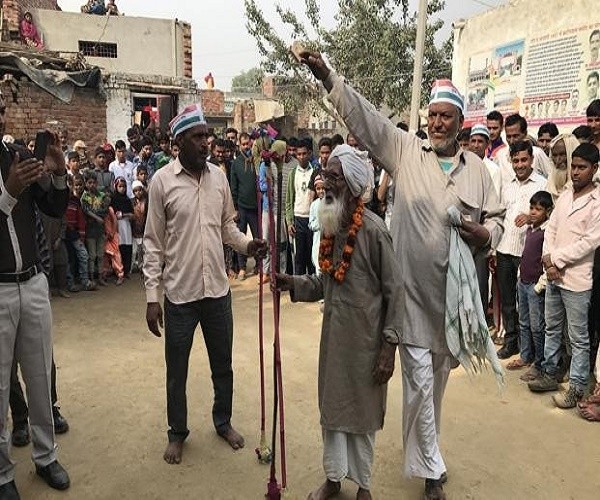 In a village in western Uttar Pradesh an all but forgotten martial art is a symbol of community and patriotism. For the people of the village of Basaud every Eid and every Holi, for as long as they can remember, has been marked by one rite—Bade Miyan, the oldest man in the village, performing for them on stage. Bade Miyan, whose real name is Mohammad Hussain, is more than a hundred years old.

The last time he performed, on a winter afternoon, nearly two months ago, he appeared gaunt and a little lost, his eyesight not as sharp as it used to be. But when he came on to the stage, it was as if all the years had melted away. He whirled round and round like a dervish, his arms dexterously making wide sweeping circles with long wooden sticks, as the audience stood agape. They could hardly believe they were seeing a 107-year old man.

Bade Miyan is quite possibly the oldest living practitioner of pata hilana, an ancient martial art form of northern India. Once widely practised in the countryside upto the end of the 19th century, it has now all but gone extinct. Pata is the Hindi word for a gauntlet sword and pata hilana translates roughly to ‘brandishing the gauntlet sword’ even if the martial art form involves sticks and not swords.

Despite its relentless decline over a century, in Basaud, a little-known village located in the Baghpat district of western Uttar Pradesh, just a couple of hours from Delhi, pata hilana has survived the vagaries of time. Generations of men from almost every family brandish the stick. “This is the glorious tradition of our village, one that every generation has kept alive,” says Bade Miyan’s grandson, Samir Ahmed, an affable young man in his twenties, who has a job in the city. But in his spare time Ahmed rallies the young people in the village to learn and keep pata hilana alive.

Boys as young as eight show up for training, but it is not easy, says Ahmed. Most residents in Basaud are landless labourers. None of the prosperity of the surrounding villages in this rich agricultural belt, a hub of sugarcane production, is found here. And yet, this may also be why this martial tradition has stayed alive. “Maybe people will have less time and show less interest in it, if they start earning more,” he speculates.

Raeesuddin, who is in his fifties, is the ustad (master) who trains the people of the village in pata hilana. He has 50 disciples currently training with him—he waves his pata like a baton and teaches them how to jump, crouch and spring in the air to save themselves. If they don’t leap, he warns them, the enemy can crack their skulls open. Eyes deeply lined with kohl, Raeesuddin looks ferocious. In his day job he works as a labourer, but when he talks about his art, his demeanour seems to change. “Idhar rok, idhar mar, idhar rok, idhar mar”. (Defend! Attack! Defend! Attack!) This is what it’s about. It requires nimble footwork to understand the right positions, and one tiny mistake can get you badly injured.”

Except for a few stray references, there is hardly any information to be found on pata hilana. Abdul Halim Sharar, the prolific essayist and historian from Lucknow, who has published close to a hundred books, wrote a detailed account of pata hilana in his book Lucknow: The Last Phase on an Oriental Culture (first published as a series of articles between 1913 and 1921). In a chapter titled, “The Arts of Combat and Self-Defence” on the military prowess of the people of Lucknow, he wrote of its popularity: “The object of this art was that if a man were surrounded by enemies he could, by swinging his pata (wooden sword) like a stick in every direction, drive them back and escape, having inflicted blows on all of them. To fence and protect oneself with a pata required great skill, the height of which was the ability to leap with one end of the pata on the ground as a lever. Praise was accorded a man who, if he were shot at by ten arrows, could cut through them all with his pata.”

He traced the journey and evolution of pata through north India. It came to Lucknow, he wrote, from the eastern part of Uttar Pradesh and was most practised by weavers although eventually it was adopted by a number of nobles.

Sharar was aware that his chronicles served an important function, and that these arts were dying out under the imposition of colonial rule. The only other reference to pata is found in Scottish historian William Irvine’s The Army of the Indian Moghuls, published in 1903, where he made a passing reference to the skillful and active swordsmen of India: “…their attack and defence being accompanied by the wildest gestures, the most extraordinary leaps, and elaborate feints of every sort. Something of this may still be seen at any Muharram festival, where the most complicated evolutions and sweeping circular cuts are made with the straight gauntlet sword or patta.”

After this, the trail runs cold, no other cultural theorist or historian seems to have delved into pata hilana at any length. Editor and author M.J. Akbar in the book Blood Brothers, where he retraces his roots, wrote of how his grandfather would participate in mock combats of pata hilana along with the Hindus of the village during Muharram. “I used to see it on active display during Muharram processions, which also doubled as a display of local, age-old martial arts, that passed through my mohalla in Telinipara (in West Bengal). It doesn’t survive, sadly, for many reasons—among them being that the vibrant connect that my mohalla of jute mill workers had with village life in Bihar and UP in the 1950s and 1960s has disappeared,” wrote Akbar over email, “delighted” to find that the art is still alive in Baghpat.

Pata hilana belongs to a tradition of medieval Indian society where military arts and sports—gymnastics, boxing, wrestling, archery, fencing, which represent an intermingling of Indian, Turkic and Persian traditions—were a part of public life. Dirk Kolff, a historian of South Asia, is the author of Naukar, Rajput and Sepoy, a deeply researched book that connects the roots of the military traditions of 15th to 19th century northern India to its villages and the peasantry. He writes of the ubiquitousness of military sports in the village. “One of these sports,” he writes, “was pata hilana, a kind of athletic sword fighting”, which he compared with rustam khani, a kind of stick fighting, popular with the “lower classes”, both Hindu and Muslim.

These old arts of war would die a slow death with the advent of modern warfare and weapons that the British brought along with them. By 1818, writes Kolff, the British East India Company was able to disarm and pacify much of the countryside in its grasp, and confiscate their means of resistance.

So, how did this ancient martial art survive in a village tucked away in a district that mostly makes the wrong sort of headlines? For that we have to go back to 1857, India’s first war of independence. Basaud has a small but crucial role to play in the events from that year. After the rebellion started in Meerut, it spread through the countryside between Meerut and Delhi, as peasants took up arms. One of the heroes of the revolt was Shah Mal, a Jat farmer, who collected and sent supplies to the mutineers of Delhi.

On 17 July, the English forces captured the village of Basaud and discovered mounds of grain, wheat and dal in a ‘large storehouse collected for the Delhi rebels’. Shah Mal had taken shelter in this village the night before and escaped just in time, writes historian Gautam Bhadra in an essay Four Rebels of Eighteen-Fifty-Seven. Government troops put all men to the sword and destroyed all arms, while “two ghazees from Delhi continued fighting desperately in a mosque”, writes Bhadra.

Zakir Hussain is a 25-year-old from Basaud who studies in a college in Baghpat city. For the last few years he has been learning the art. “We take pride in it. Through this art, our forefathers contributed to the independence of this country. We want it to be alive and be recognized.”

On 17 July every year, the village comes together. The elders retell the stories of the rebellion, which have been passed on from generation to generation. Then the stage is set up in the centre of the village and decorated with bright yellow and orange marigold flowers. The women then withdraw to the terraces to watch as the men remember their ancestors and put up a performance of pata hilana. #KhabarLive