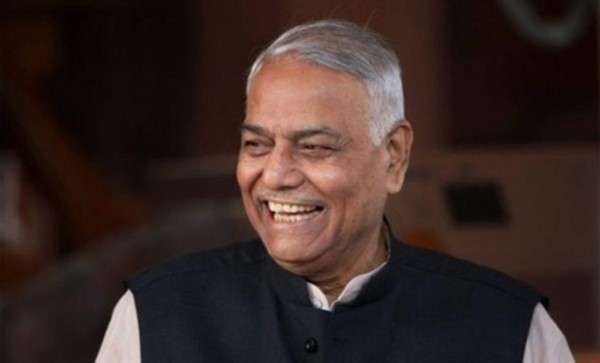 Yashwant Sinha is organising a meeting of anti-BJP parties in Patna on 21 April that will be attended by representatives from the Congress, RJD, AAP and JD(U).

Senior BJP leader and former finance minister Yashwant Sinha has some “big news”, and he’ll share it with the world Saturday.

One of the Modi government’s most vocal and strident critics of late, Sinha is organising a meeting of anti-BJP parties in Patna on 21 April. “On that day, I will make a big announcement about myself,” Sinha told KhabarLive. “I won’t divulge any further details now. You’ll know the rest on that day.”

People close to Sinha speculated that he might assume a role in the united front that opposition parties are trying to establish for the 2019 Lok Sabha elections.

The Patna gathering will be held under the banner of the Rashtra Manch, the political action group Sinha launched on 30 January with BJP MP and friend Shatrughan Sinha, also a frequent critic of the Modi government.

Among the participants will be senior Congress leaders Ghulam Nabi Azad and Renuka Chowdhary, who also attended the Rashtra Manch launch. Rashtriya Janata Dal leader Tejashwi Yadav, the son of party chief Lalu Prasad, has confirmed his attendance and will share the stage with Sinha.

Other guests include Sanjay Singh and Ashutosh of the Aam Aadmi Party, former railway minister Dinesh Trivedi of the Trinamool Congress, Ghanshyam Tiwari of the Samajwadi Party, Uday Narayan Choudhary and Pavan Varma of the JD (U), and former diplomat K.C. Singh.

Sinha, a veteran parliamentarian and politician, did not contest the 2014 Lok Sabha elections, with his constituency, Jharkhand’s Hazaribagh, going to his son Jayant Sinha, now a union minister. Subsequently, Sinha Sr was reportedly sidelined in the party, and, for three years, he only spoke up occasionally about problems in the BJP.

September 2017 saw Sinha launch a scathing attack on the Modi government with regard to what he said was its financial mismanagement, describing demonetisation as “an unmitigated economic disaster” and slamming the implementation of GST.

He has since been a constant guest at functions organised by opposition leaders, using the platforms to criticise PM Modi and BJP chief Amit Shah.

Just this Tuesday, Sinha wrote an open letter to BJP MPs, citing a threat to democracy and urging them to speak up against the Modi government. #KhabarLive