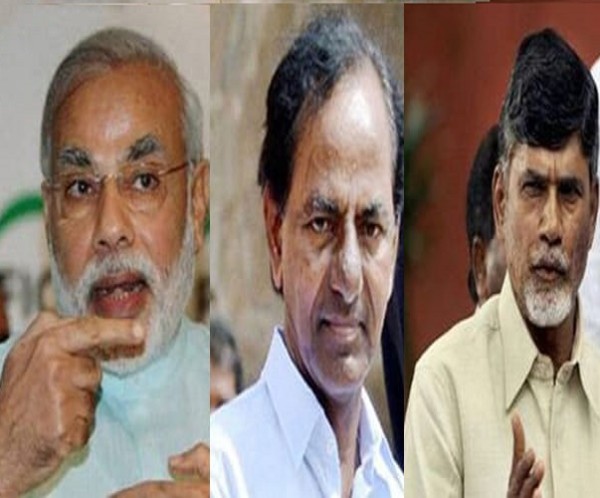 Heard people say that when they sit in meditation with their eyes closed, they visualise the images of some god or goddess coming before their eyes, but these days many of them say that when they sit with their eyes closed, they are haunted by images of politicians like the Prime Minister, Telangana Chief Minister and Chief Minister of Andhra Pradesh and leaders from Opposition in both the Telugu States.

What come to their mind more as a flash are the promises and speeches of the three great leaders who are in power. Narendra Modi promising to bring back black money and depositing Rs 15 lakh in each one’s account and assuring them that they would soon see ‘Ache Din,’ Telangana Chief Minister K Chandrashekar Rao promising Bangaru Telangana (Golden Telangana), and AP Chief Minister N Chandrababu Naidu explaining how the State has achieved growth rate of over 10 percent despite the Centre not cooperating with him. And these images get juxtaposed by another set of images, rising prices of petrol, vegetables, groceries and the problems one had to face due to a disaster called demonetisation and GST.

Scared and their body emitting drops of sweat, they open their eyes and start wondering “Jane Kahan gaye woh din.” The five-year term of the so-called visionary leaders who had won the hearts of the people in 2014 is coming to an end. But ‘Ache Din’ proved to be a mirage leaving the common man wondering whether the promise of Ache Din was for them or for the political clan?

Politicians certainly had enjoyed their nearly five-year term of Ache Din experimenting at the cost of the common man. While the banks haunt the common man, send goons to their houses in the name of recovery officers to recover even as small an amount as Rs 1,500 if a person has defaulted in payment of his credit card dues or a personal loan or who takes a housing loan, allowed the big defaulters to exit from the country. Such people had Ache Din certainly, but the common man is left finding it difficult to make their both ends meet.

An ordinary employee who used to earn about Rs 30,000 per month a couple years back used to save at least Rs 3,000 after meeting all his expenses including medicare, entertainment, paying all bills, school fees and using a two-wheeler. But today, he ends up searching for a hand loan or a personal loan to meet his revenue deficit. The GST and demonetisation have made lives miserable, he bemoans.

He is not inspired by the golden words of the Union Finance Minister Arun Jaitley that inflation has been contained and it is below double digit or what ever it is. The Union government on Friday stated that it had done a great favour to the people by reducing Rs 2.50 a litre on petrol.

It should first talk about the increase in the prices of petrol. In May 2018, the price of petrol was around Rs 79 and today it is Rs 87 and keeps changing every day. The government which did not have the heart to bring it under the GST which could have brought down the prices of fuel by about 50 percent claims to have done a great favour by reducing Rs 2.50 per litre.

If State governments follow suit, there will be “huge savings” of Rs 5, says the honourable Finance Minister. Joke of the millennium. Coming to Telangana: The first government in the new State said they inherited power problems, drought, irrigation problems, suicides by farmers and handloom weavers and a State which was destroyed by Andhra rulers. The previous rulers had taken away water, all resources and never developed this region, never cared for the poor. The TRS government would turn the State into a golden Telangana and the lives would be changed. They too promised Ache Din without using that word.

Now that the State is going for elections, the government claims it is the only State that implements welfare schemes which do not exist anywhere in the world and no one in the country not even the Prime Minister Narendra Modi had ever thought of such schemes.

They claim that in the last four years they had introduced 400 schemes. It is a stunner in the history of India. Telangana is the numero uno State is what we hear in the election speeches of the TRS. Power problems have been solved, suicides of farmers and weavers have stopped. Rythu Bandhu and Rythu Bheema has helped the farmers to become progressive farmers.

Telangana is the only State getting 24×7 uninterrupted power. “The TRS government’s scheme has become a role model for all the States in the country. Other States have no other option but to implement the Rythu Bandhu scheme,” the party claims. On the irrigation front, Telangana has done wonders.

Redesigning of projects has helped reverse the water situation in the State in four years and most of the projects are in progress and once completed, Telangana will become as well irrigated as coastal areas in Andhra Pradesh, the Chief Minister assures. Sounds music to ears. The ground situation of what the common man feels would be known only after the results are out.

Chandrashekar Rao’s fiery speeches during the agitation did enthuse the people and gave a direction to the movement for separate Telangana. That was understandable. But four years down the lane, once again we are witnessing the outburst of anger by the Chief Minister. All his predecessors are thieves, horrible people (Durmargulu) Rakshas (demons). The speeches are full of threats like if “I open my third eye… I will expose you…. All of them are subservient to Andhra rulers and have no intelligence of their own.”

ALSO READ:  How Misogyny Keeps Young Girls From Getting Medical Attention And Leads To Avoidable Deaths?

Remember in one of the Public Administration classes during my university days, I was told a good leader should have ten good qualities. Honesty and Integrity, inspire others, commitment and passion, should be good communicator, decision making capabilities, accountability, delegation and empowerment, creativity and innovation. People should ponder whether present day leaders across country have at least half of these qualities. It has become fashion to abuse, accuse the opponents in harshest possible language and claim that no one else has political space except those who are in power.

In the past, even when leaders like Indira Gandhi who was considered to be an iron lady never used such harsh language against her opponents. She used to speak more about the achievements of her government and the weakness of the Opposition rather than indulging in personal accusation. Later, during Rajiv Gandhi’s time when the Bofors issue became a major controversy, the target was the Congress party and the corruption in the government and not personal attack on Rajiv Gandhi. But now the blood boils when one hears the kind of language the politicians are using against each other. Nothing wrong in blowing their own trumpet.

But then they have no right to say that barring them, no other party has any right to exist in a particular State or rule the country. As science and technology grows and as the world has entered 21st century, people should have become more sophisticated, more sensible and civilised. But the way political vendetta is being unleashed in form of words and deeds is really disturbing and raises the million-dollar question, can the present genre of politicians usher in ‘Ache Din’? #KhabarLive