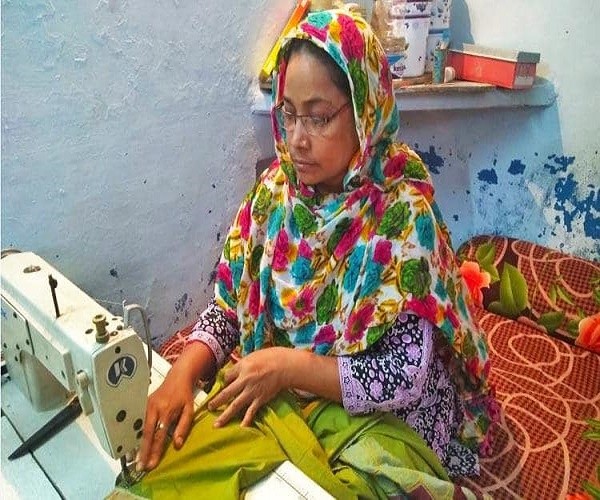 For 45-year-old Chand Bee, who returned from Saudi Arabia last month, life has further fallen into an abyss with mounting debts and deteriorating health. Sold, tortured and then no help from authorities, Chand Bee from Hyderabad says other women should know about her plight.

Chand Bee was cheated by a travel agent and sold off to a kafeel (sponsor) for Rs 3 lakhs in Saudi Arabia in 2017. Her daughter’s petition at the Humayun Nagar police station to rescue Chand Bee fell on deaf ears until she returned to India on June 27.

A resident of Ahmed Nagar in Hyderabad, Chand Bee was promised a tailoring job and flew to Saudi Arabia in May 2017 with help from a travel agent in Golconda named Adil.

Adil promised Chand Bee who only had a 3-month visiting visa, that he would get her a job visa as a tailor once the kafeel was satisfied with her work. As promised, Chand Bee worked as a tailor for three months at the kafeel’s mansion and earned 1500 Saudi Riyal every month.

But things took a tragic turn in August 2017 when Chand Bee lost her job and was made a khadamma (housemaid) at the kafeel’s house. Speaking to TNM, Chand recalls her shocking ordeal.

“Things were fine until August when suddenly Khadeeja, the kafeel, locked me up in a room and tortured me, forcing me to work as a khadamma. I refused. I was denied food and water and was tortured for days,” Chand Bee says.

Following a bout of sickness and much coercion from another Bangladeshi woman working in the home, Chand Bee agreed to work for the kafeel at 1200 SR per month.

Chand Bee’s day began at 6 in the morning and ended at 11 pm on regular days. On few days, it went till 2 or 3 in the night during iftars and house parties. “We were given only one meal a day. Sometimes, unable to resist hunger, we used to steal from the leftovers. We were asked to freshen up in less than 3 minutes and could not talk on phone for more than 15 minutes. We used to be so exhausted that for days altogether, I did not take a bath or even comb my hair,” Chand Bee recalls.

From cooking to working in poultry farms, Chand Bee was forced to work in their packaging units and date farms as well. “When I confronted the kafeel about returning to India, she demanded a huge amount in compensation. Only then did I realise that Adil, the travel agent, had sold me off to the woman for Rs 3 lakhs for 2 years. I was their slave,” Chand Bee says.

After 3 months of laborious work, Chand Bee fell ill and could no longer hide the torture and pain from her children. Having lost her husband, who was running a pan shop, four years ago, the home was run solely on Chand Bee’s income.

“We were shocked when mother narrated her plight. My sister approached the Humayun Nagar police and gave a written petition. The police sent her away to come back after ‘Eid’ and told it was not under their purview since it was an ‘international case’,” Chand Bee’s son Wasim told KhabarLive.

Meanwhile, Chand Bee contacted Adil who brazenly asked her to put up with the torture until he sent another woman from India. “Later on he began disconnecting calls and stopped replying to our messages. Only after a complaint was registered, we discovered that Adil had around 8 human trafficking cases registered against him in different police stations,” Chand Bee’s daughter-in-law Sameena said.

Even though Wasim approached a number of organisations in the city for help, none extended a helping hand. “My mother was sick. We had to bring her back at any cost. I approached MIM for help but our plea fell on deaf ears. It was later that I learnt about MBT and Amjedhullah Khan agreed to help us,” Wasim says.

Despite MBT’s intervention, Wasim found no monetary support from any corner. Meanwhile Chand Bee fell ill and had to be admitted in a hospital in Saudi Arabia. Her kafeel was adamant that she will be released only when 11,000 SR was paid.

“We saw no help coming from the Ministry of External Affairs Govt of India, the Indian Embassy in Riyadh or from the Inspector of Police in Humayun Nagar. Wasim borrowed money, mortgaged some gold and deposited Rs 2.05 lakhs in the kafeel’s account. I was released from their bondage 10 days later,” Chand Bee recalls.

After the case came into light, the Humayun Nagar police issued a press release blaming Chand Bee’s daughter for not submitting a written complaint. It further stated that the SI Karunakar Reddy could not register a case since the accused was living under the Golconda police station limits.

“The cops say that it’s difficult to proceed with the case until Adil returns to the city and is summoned at the police station. But is it not the police’s job to issue a search warrant against the accused or contact the Mumbai police for help?” Wasim asks.

Prominent Muslim leader Amjedullah Khan, spokesperson of MBT, says that even though the Asif Nagar police have now registered a case against Adil, the police is hand-in-glove with the accused.

“The case is only a sham to hide the Humayun Nagar police’s inefficiency. Going by rules, the police are bound to register a complaint wherever the complainant resides. This is a clear case of nexus between the police and the human trafficking mafia,” Khan says.

ALSO READ:  Why No One Is Reading Your Awesome Content?

Karunakar Reddy, the SI of Humayun Nagar police station, was unavailable for a comment.

According to the National Crime Records Bureau (NCRB), in all the 8,057 cases of human trafficking registered with the police, TS and AP have registered 229 and 239 cases respectively. AP stands third in sexual exploitation of the trafficked women in the country with 736 women being rescued while Telangana stands sixth with 314 women.

Speaking to KhabarLive, K. Sudha, General Secretary of the Human Rights Forum for AP, says, “This is a clear case of nexus between the police and the trafficking mafia which has been operating in Hyderabad since decades. The state had brought in a set of amendments in human trafficking laws after the infamous Mehboob-ki-Mehndi eviction in 1996. The connivance of the police with the trafficking mafia, who pay a lump sum amount as haftas to the cops, was well known. Years have passed, but very little has been done to curb this exploitation. When the state machinery itself works in favour of the accused, there is very little that can be done to help the poor and uneducated like Chand Bee.”

Meanwhile Chand Bee, who does not place much hope on the police or judiciary, wants the world to know about the thousands of other woman trapped in gulf countries with their families mounted in debts awaiting their return.

“I ran for my life since I had my two kids who could arrange money. But there is another Bangladeshi woman still working in the house, waiting for the kafeel to release her. I hope this reaches out to her family who has not had a glimpse of their daughter in the past two years,” Chand Bee sighs. #KhabarLive