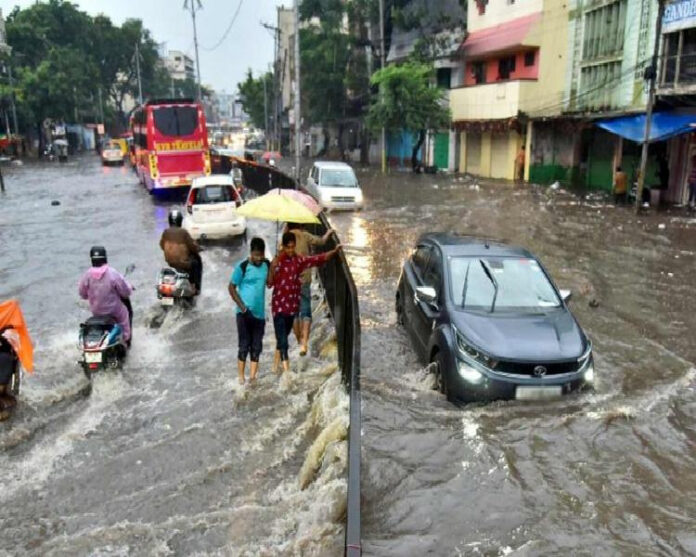 Surplus water continues to be let out from Osmansagar and Himayatsagar reservoirs. Areas in the Old City in Hyderabad located along the Musi river were among the most affected after the city based twin reservoirs marked full after received over 100 mm of rains.

Following excess inflow of water, Hyderabad Metropolitan Water Supply and Sewerage Board (HMWS&SB) lifted 12 gates of Himayatsagar reserviour up to two feet, and six gates of Osmansagar reservoir up to three feet. This led to an increase in the water levels in the Musi. As a precautionary measure, traffic police closed Chaderghat causeway and Moosaram bridge for vehicles following the rise in water levels as a result of huge inflow from upstream.

In result,  the released excess water entered houses in low-lying areas with many having to use electric pumps to drain it out.

The Musi river remained flooded with surplus water continuing to be let out from Osmansagar and Himayatsagar reservoirs. The alert for residential areas along the river continued due to the huge flow of water, almost touching the bridges at a couple of points. Hyderabad traffic police reopened Moosarambagh bridge for traffic. An official said if water level increases, the bridge will be closed again.

Hyderabad Metropolitan Water Supply & Sewerage Board (HMWS&SB) is releasing the water from twin reservoirs following heavy downpour in the catchment areas over the last 2-3 days. Though rains receded since Tuesday, the reservoirs continued to receive huge inflows from the catchment area.

The HMWS&SB has alerted the administrations of Hyderabad and Rangareddy districts, police and Greater Hyderabad Municipal Corporation (GHMC) about the possibility of floods in the Musi river, so that residents of the surrounding areas could be shifted to safer locations.

At least 400 families from areas along Musi banks at Chaderghat and Moosarambagh were shifted to relief camps.
A body was seen floating in Musi at Moosarambagh. Locals shot the video of the floating body and alerted the police. However, by the time the police could react, the body got washed away.

Two people were washed away in two separate incidents in Vikarabad and Kamareddy districts when heavy rains lashed the state under the impact of cyclonic storm ‘Gulab’.

Those living in areas along the Musi river were alerted and asked to move to safer places or take precautionary measures in case water level rises. Residents are also concerned that the downpour will give rise to a mosquito menace

which could result in a rise in cases of dengue and other vector-borne diseases.

“So far, no officials have come to resolve issues being faced by us. We urge the GHMC mayor and the commissioner to come around Old City to find out more about public issues,’’ said, the residents of Mustaidpura and other colonies. #KhabarLive #hydnews