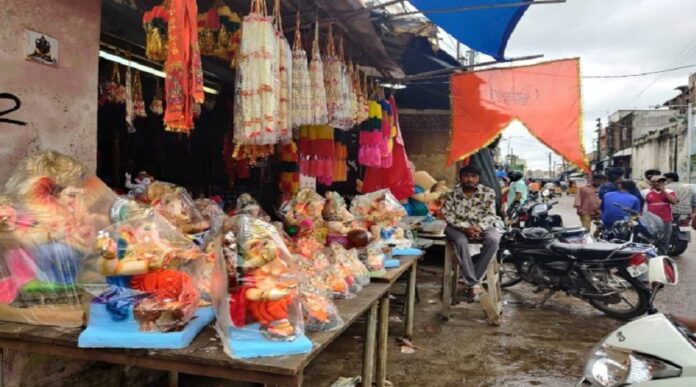 The narrow Dhoolpet road in Hyderabad is bright with colorful Ganesha idols dotted on either side of the road, giving a fresh lease of life to the dull street. The busy street with the cacophony of roaring vehicles and customers negotiating with the idol sellers welcomes you with tiny, eye-catching Ganesha idols that are themed around popular Indian cartoon characters like Bal Ganesha.

Seated on a pedestal, Veer Singh, who is in his late 20s, was eagerly looking at the passersby, hoping that they would make a stop at his shop to make a purchase. “This is how it has been since morning, people are just walking right past the shop,” he said.

Ganesh Chaturthi will be celebrated on 22 August 2020. Owing to the coronavirus pandemic, the business has been acutely dry. “Forget making profit, we don’t think we will be even able to recover our investment,” said Naveen, Veer’s brother.

Veer and Naveen set up the shop five days ago with nearly 200 units of idols. However, they have managed to sell just around 50 idols so far. “We just have one more day left, and it is highly uncertain that we will be able to sell all these idols by tomorrow,” sighed Naveen.

ALSO READ:  'Rehana Khan' - The 'Crowd-Puller' And The 'Dare-Devil Biker' Of The 'Maut Ka Kuan' At Hyderabad's Numaish

Most of the sellers in Dhoolpet importing the idols from Solapur in Maharashtra. But some like Veer Singh and Naveen, who are from the Lodha community, make their own sculptures. The Lodha community is a community of traditional artisans who make idols throughout the year for a living.

Dhoolpet in Hyderabad is the prime place to purchase Ganesha idols, and it enjoys the patronage of devotees coming from across the districts of Rangareddy, Malkajgiri, and Medak. They throng in large numbers to purchase the idols ahead of Ganesh Chaturthi. The fervor of the festivity is markedly missing this year, due to the pandemic, which has claimed 800,000 lives globally.

“There’s no public at all,” Veer said. To give an idea about the crowd in the street before the pandemic, he said, “This street would be occupied with heavy vehicles, making it extremely difficult for people to navigate.”

Sellers across the street share the same sentiment of grief and setbacks. “Our primary customers come from All districts, but this time, they have not arrived,” bemoaned an idol seller.

The sellers express their ire at the Telangana government for passing a directive against erecting Ganesh statues in public places as part of the COVID-19 norms. “We have suffered huge losses. Our livelihood depends on selling these statues. Now we have to pay interest for the loans we took for the business. How will I repay now?” Vinayak, another vendor, lamented.

The government had asked the citizens to worship Ganesh at their houses, as against the usual public congregations. Hyderabad police have also ordered the sellers not to sell Ganesh statues beyond 3 feet. While Dhoolpet has statues that are mostly 3 feet and less, the manufacturers have hiked the price, which the sellers said, is almost twice the actual amount.“The idols, which we were selling for Rs 4,000 earlier, is now priced at Rs 8,000. Because of the price rise, too, customers are not eager to purchase,” pointed out Arun Singh, a seller at Dhoolpet.

There are, however, other sellers who had better business. Naveen Singh, another idol seller, for example, had 70 regular customers this time, and he sold all the units, earning Rs 5 lakh. “I just need Rs 3 lakh more to cover my investment,” he said. #KhabarLive #hydnews