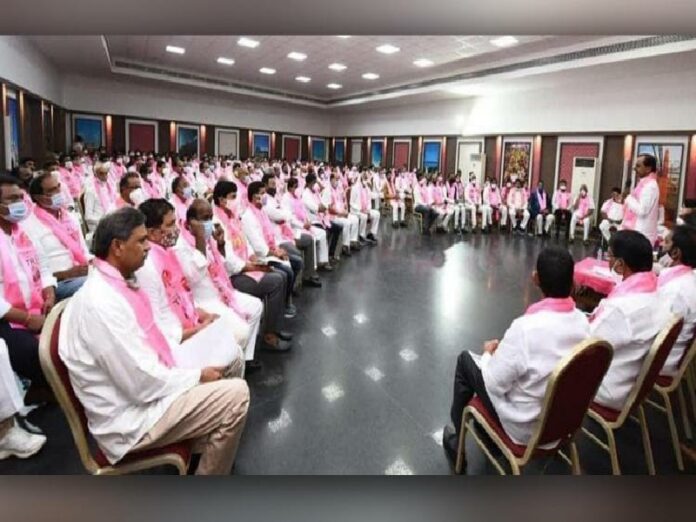 The ruling TRS party is minutely planning to combat the setbacks happened and more to come in a systematic manner. In the forthcoming GHMC elections. The system laid to act political tricks as per the region and using the religion card loaded with welfare schemes.

As the story deepens, a day after the State Election Commissioner announced the dates for the Greater Hyderabad Municipal Corporation (GHMC) elections, political corridors in the state are abuzz with activity. The TRS convened an important parliamentary and legislative meeting, presided by Chief Minister K Chandrasekhar Rao and attended by all Members of Parliament (MPs), Members of Legislative Assembly (MLAs) and Members of Legislative Council (MLCs).

According to highly placed sources in the party, every Minister, MP, MLA and MLC will be made in-charge of each of the 150 divisions of the GHMC. They will be entrusted with the responsibility of highlighting development works carried out by the party. The source, who is confident of a victory in the GHMC elections, also revealed that the TRS camp had begun preparations for the civic body polls way before the Dubbaka Assembly bye-elections. “The entire mapping has already been done. Once the nominations are complete, every leader in the TRS will be out campaigning in their respective divisions,” the source said.

In 2016, the TRS had managed to win 99 seats in the municipal body elections. According to party sources, the recent defeat at Dubbaka has only made the TRS set their eyes more sharply on victory.

Exuding confidence while addressing the media, Animal Husbandry minister Talasani Srinivas said, “Today, Hyderabad has CCTV cameras, parks, footpaths, basti dawakhanas, flyovers, roads, etc. Thousands of crores have been spent on development with a vision. Kalyana Lakshmi, Shaadi Mubarak, KCR Kits, pension schemes and KG to PG scheme are all introduced for the welfare of the people. We will bank on our work and everything we have done.”

“Our criteria is development and the welfare of the people. There was a time where people spoke about Bengaluru and Chennai. Today, Hyderabad is in the spotlight and people want to settle here,” he added.

While the TRS won 99 seats in the last GHMC elections, after the election, the lone Telugu Desam Party (TDP) corporator joined the TRS and took the tally of the party to 100. Even this time around, the TRS is confident of winning around 100 seats. When asked about how many seats the TRS is eyeing this election, Minister Talasani said, “According to my calculation, TRS will win 104 out of 150 wards.”

While KCR will be monitoring the polls, Municipal Administration and Urban Development Minister KT Rama Rao is expected to play a prominent role, considering his experience of closely handling the portfolio. “He knows the GHMC limits in and out and is well versed with the city and all the development that has taken place,” said the source. KTR will be holding road shows and group meetings.

ALSO READ:  How 'Nizam Of Hyderabad' Celebrated 'Eid' During His 'Last Days' Of Rule?

The BJP, which won the recent bye-election in Dubbaka, has been crying foul about the sudden decision of the State Election Commission to announce the elections. Alleging a conspiracy by the TRS, it said that the election was being held with short notice. However, the party seems to have upped its ante and taken it up as a challenge.

The BJP has made its National General Secretary Bhupender Yadav, who steered the NDA to a victory in Bihar, in charge of the GHMC elections. He will be leading the BJP’s fight and has already begun work on the party’s strategy for the upcoming polls. Few others like Karnataka Health Minister K Sudhakar, Maharashtra BJP leader Ashish Shelar and others like Pradeep Singh Waghela and Satish Reddy, are part of a team monitoring the elections. Former Hyderabad Mayor Banda Kartika Reddy also dumped the Congress to join the BJP. #KhabarLive #hydnews