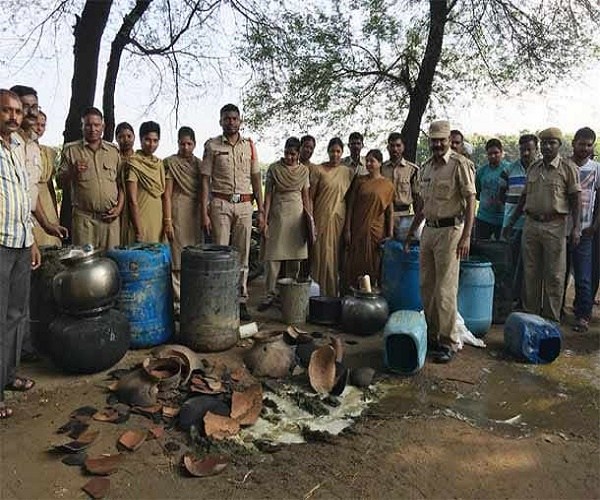 Among all the programmes of the TRS government, one programme that did not get sufficient media exposure in proportion to its positive impact on the people is the eradication of illicitly distilled liquor (IDL) and contamination of toddy, both of which have played havoc with the health and wealth of the poorer sections.

IDL, aka Gudumba, is manufactured using extremely obnoxious and dangerous ingredients through a highly unhygienic process. The very process is disgusting to look at. Even, used leather chappals and urea are used in its manufacture. As there is a huge demand-supply mismatch of toddy, it is diluted and mixed with dangerous intoxicating agents such as coral hydrate, diazepam, and alprazolam, leading to the dangerous habit-forming drugs. Most poor addicts use these intoxicants, as they are much cheaper than Indian made foreign liquors (IMFL) such as whiskey, brandy and rum.

Since Independence, these two areas received scant attention of the government except during the NTR regime when blanket ban on all types of intoxicants was effected, rather ineffectually. As a result, it was abandoned by the Chandrababu Naidu government. Subsequently, no government bothered to pay attention to this social evil.

Multi-pronged Attack
Even though politically incorrect, the TRS government, as in all other areas of governance, initiated a multi-pronged attack on IDL and contamination of toddy through various measures without completely depriving the alcoholics the availability of liquor as in the case of total prohibition, which never succeeded.

Firstly, it identified the sources of ingredients used in the production of IDL such as jaggery and alum and plugged them with an iron hand. The government applied the same measure successfully with regard to toddy by completely constricting the supply of its contaminants such as coral hydrate, diazepam and alprazolam. These are used to increase the intoxicating potency of the toddy.

ALSO READ:  How TRS Is Wooing 'Andhra Settlers' To Support In Telangana Elections?

Secondly, their production was stopped by conducting regular and intense raids on centres, which were mostly in remote forest areas. The IDL manufacturing units just have a few containers and, hence, it is easy to abandon and shift them during raids. With excise staff overburdened more with excise activities than prohibition, police were inducted in large numbers. Concerted and repeated raids have succeeded in capturing the IDL makers.

Choking Distribution Channels
Thirdly, the distribution channels of IDL were completely choked by identifying and neutralising the persons involved in its sale. This was a humongous job as the distributaries were not fixed shops but mostly shifting constantly as both buyers and sellers were hand-in-glove to escape the regulatory authorities.

As a fourth measure, these captured and identified IDL makers were presented before magistrates and a strict vigil was kept over their movements and whereabouts. This measure deprived them of their livelihood. To compensate them for this loss and to wean them away from these illegal and perilous operations, the government embarked on their rehabilitation through the Gudumba Dependent Persons Rehabilitation scheme.

Under this, every ex-convict or accused IDL maker was given a loan of Rs 2 lakh and a helping hand to start his own small business along with relevant training for starting the unit. SC, ST, BC and Minority corporations were roped in to provide the funds, which also helped in better fund utilisation. These gestures have paid off dividends over the years so much so that in some places there is complete elimination of IDL while in a few the manufacture of IDL is down by 80-90%.

Compensating for the Loss
Now the question of compensating for the loss of IDL and cheap toddy remained to be tackled. This was done by providing cheap IMFL, popularly known as ‘cheap liquor’, to the addicts through permit rooms attached to the IMFL retail outputs and by increasing the bars by reducing the population limit for sanction of a bar. Simple transgressions in the rules for distribution of ‘cheap liquor’ were overlooked to ensure its smooth flow in rural and remote areas.

In the case of toddy, the job of curbing contamination was easy as toddy-selling units were licensed and their records were available with the government. Earlier, it was lack of political will that stood in the way of finding a solution to this problem. But as Chief Minister K Chandrashekhar Rao is committed to the welfare of the poor, the Excise Department was given carte blanche to ensure complete elimination of contamination of toddy by blocking the supply of contaminants and by regular inspection at the distribution and selling points. This has brought about drastic improvement in the health of its consumers.

The Positives
The upside of the above measures is that they helped the government kill two birds in one shot — elimination of IDL and more revenues through increased sales of IMFL. There has been a 17% increase in the average revenue of the Excise Department over the last four years.

A few hurdles still need to be tackled. Enquiries reveal that quite a good number of rehabilitated IDL makers are not able to run their units and repay their loans. Those without other sources of income are still carrying on with their old practices surreptitiously.

This is also because of the fact that the IDL and contaminated toddy addicts are unable to satisfy their needs with the ‘cheap liquor’ as it is costlier than the IDL. One addict said that one bottle of IDL costs Rs 100 and lasts for two to three days whereas one quarter of ‘cheap liquor’ costs Rs 120 and lasts only one time. A housewife confided that though the health of these addicts improved by non-availability of IDL, their monthly expenditure on drinking IMFL tripled.

It is, therefore, necessary that the government should go a step further and think of measures for providing the ‘cheap liquor’ at the same cost as the IDL or toddy by cross-subsidising through increase in premium brands of the IMFL. #KhabarLive