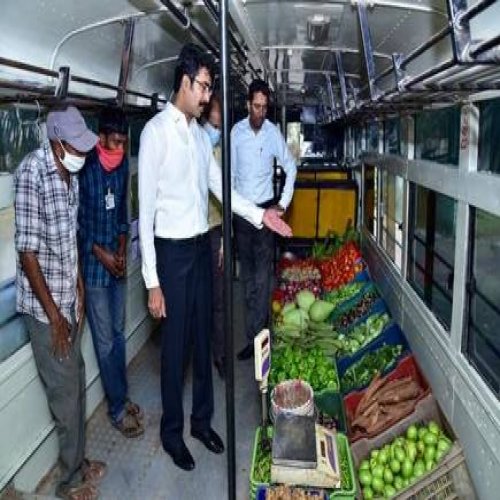 The Telangana government has adopted an indigenous technology to tide over lockdown challenges and deliver produce at citizens’ doorsteps. A coordinated effort of Department of Agriculture, Marketing and Horticulture has been responsible for plying vehicles called Mobile Rythu Bazars (MRBs) from farmer-run markets, every day, to residential localities across the Greater Hyderabad region, covering 625 sq km.

From March 23, the state of Telangana has been under lockdown during the day and a curfew in the night to prevent the spread of novel coronavirus. The resolve to discourage consumers from crowding at the markets has led the state officials to look up to Bhuvan, a geo-portal developed by National Remote Sensing Centre (NRSC) under the country’s premier space agency, Indian Space Research Organisation (ISRO). To put it simply, Bhuvan is known as the Indian version of Google maps/Earth. Bhuvan was launched in 2009 with focus on map visualisation services but later on diversified.

With access to satellite images, maps and tools, the department got down to build a solution and strategy to meticulously cater essentials to 20 lakh residential households in Hyderabad. It involved scientists from NRSC, who developed the product in three days. With a collaborative effort, a vehicle tracking solution was built based on Bhuvan, using its mapping data.

ALSO READ:  Free Bicycles Help Wheel Students To School But What About Freedom Of ‘Action’ And ‘Thought’?

Once the Geographical Information System (GIS) tool was ready to be launched, the officials reached out to the farmers and partner drivers of the goods trucks. They have to click on the link and enter their details after which their vehicle would be tracked through their mobile phones.

The officials want to map the vehicle’s pre-designated routes and halting locations, which would ensure that the MRBs reach out to new locations everyday. Also as this is based on a GIS platform, residents and communities can share their location for easy allocation.

“This is a new situation,” said B. Janardan Reddy, Principal Secretary, Agriculture, Telangana. “We have gone for a tsunami convergence model immediately after the lockdown and 200 vehicles were used as MRBs to cover 3,500 locations which was our fastest reaction. The idea was to reduce the density as we did not want any of the Rythu Bazars to be the epicentre of coronavirus. We want to use the technology to make sure that every area is covered and there are no gaps in service delivery.”

Reddy informed that they are planning to rope in Postal Services vehicles and state road transport buses till lockdown is lifted to further decentralise the market model.

There are 12 Rythu Bazars or state-run markets, where farmers directly sell their produce, in and around Hyderabad. Close to 300 ‘Mobile Rythu Bazars’ or vegetable and fruits trucks load up at these markets or directly reach out from their villages to 500 locations per day, including colonies, gated communities and apartment complexes.

The tracking team, with the help of GIS tool maps these routes and locations, and plans the next task for the trucks in order to cover the entire city. Each vehicle covers around two locations every day and all the vehicles put together transport 500-600 tonnes.

“It is a wonderful tool and any moving vehicle can be tracked. In Bhuvan portal, there is an integrated approach as NRSC, satellite imagery is brought together with Survey of India maps. Since it is based on open source GIS software technology, there is no cost associated and other government departments like police, health and urban local bodies which have a location perspective can freely access these tools for better administration.

Rows and columns cannot present the data as the GIS and mapping technology enables spatial visualisation,” said Major Shiva Kiran, a key member of the project, coordinating between the Telangana government and NRSC, and also a civil society activist. #KhabarLive