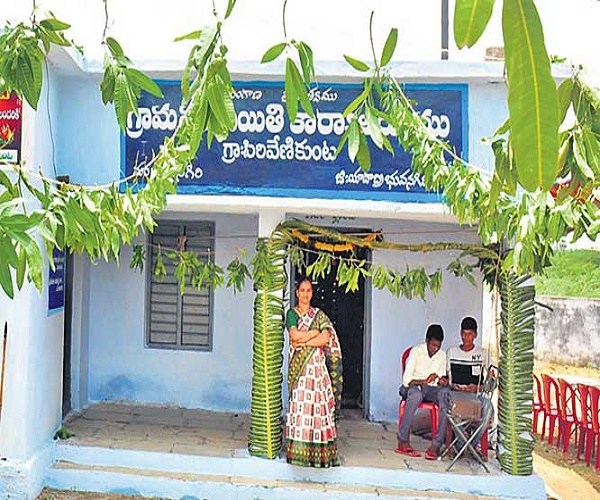 Telangana govt has made the right moves to make its villages self-sustainable, reflecting the true spirit of Gram Swaraj. Mahatma Gandhi advocated Panchayati Raj as the foundation of India’s political system, as a decentralised form of government in which each village would be responsible for its own affairs — the true vision was Gram Swaraj – the village self-governance.

The Balwant Rai Mehta Committee recommended the establishment of the scheme of democratic decentralisation and the same was adopted by the Government of India which finally came to be known as Panchayati Raj in India.

The Panchayati Raj system was first adopted by Rajasthan in Nagaur district on October 2, 1959. Other States followed thereafter. The State governments during the 1950s and 1960s adopted this system as laws were passed to establish panchayats in various States. The Act aims to provide a three-tier system of Panchayati Raj for all States having a population of over 2 million, to hold Panchayat elections regularly every five years.

Now the Panchayati Raj system exists in all the States and UTs except Nagaland, Meghalaya and Mizoram, and Delhi. The three-tier system are Gram Panchayat at the village level, Panchayat Samiti at block/mandal level and Zilla Parishad at the district level.

Channelisation of sufficient funds to Panchayati Raj institutions is an important aspect and the main three sources are: i) Local body grants ii) Funds from implementation of centrally-sponsored schemes and iii) by respective State governments. In the history of Panchayat Raj in India, April 24, 1993, is important as on this date the Constitution (73rd Amendment) Act 1992 came into force providing constitutional status to the Panchayati Raj Institutions (PRIs).

Loopholes in the System
Two major loopholes still exist in the Panchayati Raj system. These are:

In Telangana
Telangana, though the youngest State, has taken measures to strengthen PRIs in the State. The Telangana Panchayat Raj Bill 2018 was passed by the Assembly on March 29, 2018, replacing the old Panchayat Act 1994 in order to infuse new dynamism into the existing institutions. This paved the way for the formation of 4,389 new gram panchayats taking the total panchayats in Telangana to 12,741.

The new Bill also paved the way for conversion of a few tandas into full-fledged gram panchayats, reserved for Scheduled Tribes only. The new Panchayat Raj Act envisaged certain changes such as stripping Panchayat Secretaries of their executive powers and making them responsible for audit of funds. However, this needs finetuning as Panchayat Secretaries function under the administrative control of Gram Sarpanch.

Elections to 12,700 Gram Panchayats were held in three phases this January and about 2,000 sarpanches were elected unanimously. Thereafter, elections for members of 539 Zilla Parishad Territorial Committees (ZPTCs) and 5,817 Mandal Parishad Territorial Committees (MPTCs) were held in three phases in May across the State. Counting of votes was completed on June 4. Afterwards, the indirect elections for Mandal Parishad Presidents and Vice-Presidents and Zilla Parishad Chairman and Vice-Chairman were held on June 7 and 8 respectively. Thus, the entire election process of PRIs was completed successfully in the State.

Apart from the introduction of the Panchayat Raj Bill 2018 and the smooth conduct of elections, the Telangana government has taken another bold step to ensure sufficient funds flow to Gram Panchayats. It is envisaged that Rs 1,628 crore is to be received by Gram Panchayats in 2019-20 from the Central Finance Commission. A matching grant of Rs 1,628 crore would be released by the State government.

Way Forward
Measures to revive/rejuvenate the existing Panchayat Raj Act has paved the way to provide more funds to Gram Panchayats and allocate more power to the Sarpanches/CEOs. It is also noteworthy that certain rural areas hitherto uncovered, are now included as full-fledged Gram Panchayats which will enable integrated development of these neglected areas.

However, there is an urgent need to strengthen PRIs, in general, and Gram Panchayats, in particular, to make India more vibrant. The miserable infrastructure facilities currently available with Gram Panchayats should be enhanced manifold. Real-Time Governance (RTG) and digitalisation should become an integral part of the functioning of Gram Panchayats with more transparency, prompt customer services and accountability.

Better service conditions, pay package and other incentives for the PRI employees are needed to attract talented and dedicated human resources. Infusion of new blood will enhance its effective functioning. There is also an urgent need for transfer of various governance functions such as provision of health, education, water and sanitation to Gram Panchayats.

Convergence of all centrally-sponsored schemes as well as other welfare schemes of the State government should take place at the village level. In order to avoid mis-utilisation of funds and poor governance, adequate checks and counter-checks should be put in place. Effective supervision of higher authorities is much needed to take timely action on miscreants and corrupt persons (if any) in the system. Duties and responsibilities must be defined in clear terms for all the key functionaries of PRIs and accountability should be fixed.

Since India lives in villages, every village has to be made self-sustained and capable of managing its own affairs. Only then can we attain the goal of Gram Swaraj in true spirit. The need of the hour is not only smart cities but also smart villages. #KhabarLive