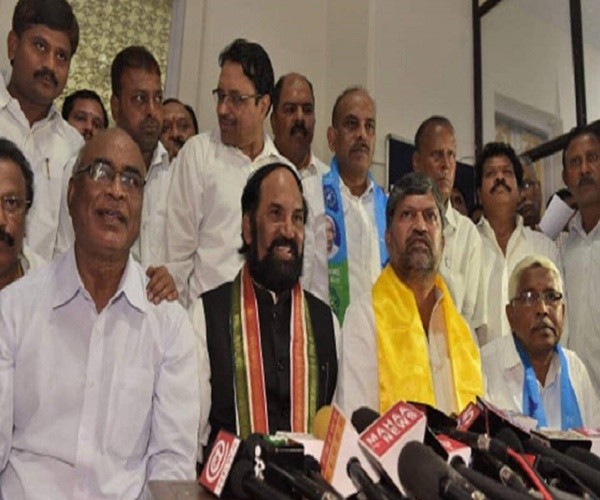 The Maha Kootami or a grand alliance of the Opposition parties in Telangana is now more or less a reality to take on the Telangana Rashtra Samithi in the coming assembly elections.

Three opposition parties – the Congress, the Telugu Desam Party and the Communist Party of India – have agreed in principle to form a grand alliance and they are trying to rope CPI-M and also Telangana Jana Samithi into the alliance shortly.

They might come out with a common manifesto and common action plan for the forthcoming elections.

So far so good. But the problem comes with the seat sharing. The Congress, being the biggest opposition party, wants a lion’s share in the number of seats, while leaving a bare minimum to the TDP and the CPI which it feels are smaller players and have no stakes on coming to power.

During the discussions, the Congress reportedly indicated that it wants to contest in not less than 90 seats in the 119-member assembly, as it has to win a minimum of 60 seats. So, the other alliance partners have to be content with sharing the remaining 29 seats.

While agreeing that the Congress is a major stakeholder, the TDP leaders are learnt to have conveyed to Congress leaders that they would have to contest in not less than 25-30 seats.

“If you fall short of majority, we are always there to support you and we can form a coalition government,” the Telangana TDP leaders reportedly told PCC chief Uttam Kumar Reddy.

Interestingly, the TDP leaders also conveyed to the Congress leadership the message of their boss and Andhra Pradesh chief minister N Chandrababu Naidu that their party would fund most of the election campaign for the Congress.

Sources said the TDP had offered to pump in Rs 200 crore for the Congress campaign in Telangana and in lieu of that, the Congress will have to leave more seats to the TDP.

This is really a tempting news for the Telangana Congress, which is starved of election funds now. At the same time, it cannot afford to lose the opportunity to come to power on its own.

“We don’t want to depend on another party to form the government, because it will be unstable and will help the TRS to bounce back. Let us work out a reasonable agreement and go ahead,” the PCC chief is learnt to have told them.

Earlier, in a bid to defeat the Telangana Rashtra Samiti (TRS), the Congress and Telugu Desam Party (TDP) have decided to join hands in Telangana, which is set for early polls after the assembly was dissolved last week. The Communist Party of India (CPI) is also part of the ‘maha kootami‘ (grand alliance), the party leaders announced.

The Telangana heads of the three parties met in Hyderabad for the first round of talks and announced the decision afterwards. Telangana PCC president N. Uttam Kumar Reddy told Hindustam Times, “We have decided in principle to form into a grand alliance… we are working out the modalities for the same. We are also trying to rope in other like-minded parties like Telangana Jana Samithi and CPI(M) into the alliance.”

This is the first time that TDP, which was formed in 1982 by filmstar N.T. Rama Rao to fight the Congress’s monopoly in then united Andhra Pradesh, has formed an alliance with the grand old party. Discussions are underway to decide the seat-sharing.

According to reports, Andhra Pradesh chief minister and TDP supremo N. Chandrababu Naidu had advised the party’s Telangana leaders to align with the Congress to ensure that anti-establishment vote does not get split.

After the 2014 state elections, the TDP and Congress together had 36 seats in the 119-member assembly. Poaching by the ruling party saw their numbers depleted to just 16, with TDP getting hit the worst. However, both parties claim that their grassroots presence is still strong, which coupled with the anti-incumbency vote, would aid their common cause.

According to the sources, the Congress wants to contest at least 90 seats and would aim to cross the half-way mark of 60. TDP is looking to contest around 30 seats, meaning seat-sharing talks might not prove tricky.

BJP and TRS criticised the alliance as opportunistic. TRS leaders have exuded confidence that the party will be re-elected, irrespective of any alliances that opposition parties may forge. #KhabarLive