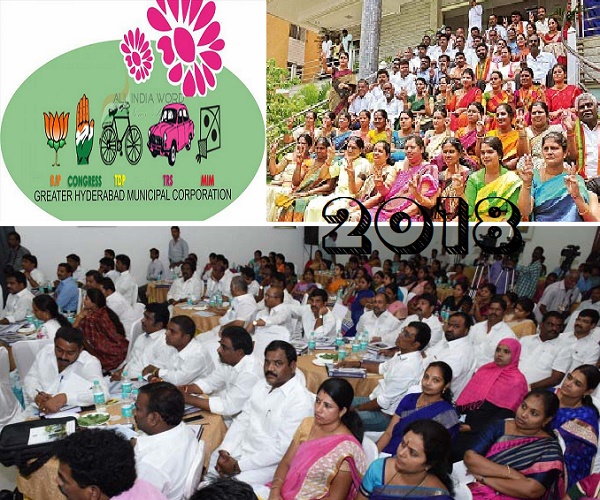 No big shakes happened to public with trusting so much in KTR and giving him thumping victory. Corporators have gone worse from bad. People have just voted blindly to TRS without even knowing their Corporators. Its a fact that not a single corporator has turned up till now nor will in future to their wards to know the issues.

With the Mayor and 150 corporators of Hyderabad completing two years of their tenure, electors want to know what results have been delivered in the past 24 months.

They say that a major part of the election manifesto remains ignored. Improved sanitation, road networks and underground sewerage system, the curbing of illegal construction and the removal of encroachments on nalas are all distant goals.

There has been no significant change with respect to key civic amenities in the past two years.

The city’s sanitation has taken a beating. Of every 10 complaints recorded, six pertain to garbage and its disposal. Either garbage is openly dumped, or it is collected irregularly, which results in the overflowing of community bins.

This also compounded to the stray dog menace and the breeding of mosquitos. The remaining complaints are about the state of the roads, street lights and the overflowing of sewerage.

Sai Kumar of Indiranagar Colony, Warasiguda, says, “The sanitation staff collect garbage irregularly and even demand extra money. At night, unknown persons dump waste in the open. Sweepers come only once in a week. In December, no sweeping was done for 20 days, and in spite of this we had to pay them.”

L. Naresh of Rambagh, Attapur, says, “Water from the drain has been overflowing for a week, creating a breeding ground for mosquitoes. The street stinks and residents are unable to pass by. When complaints were made to the GHMC and the corporator, temporary repairs were done, but the drain is leaking again. People have lost faith in the system.”

Another drain near State Bank in SBH Colony has been overflowing for the past 10 days.

This has resulted in the formation of a large pool of water in front of Namitha Everest and TNR Vaishnavi Apartments. Passers-by and local residents are forced to suffer the foul smell and the mosquito menace.

Meanwhile, residents of the city are also distressed by the growing population of stray dogs; nearly every ward has raised concerns. Phani Garugu of Chikkadpally says, “We are facing sleepless nights. It is becoming very hard for us to take our children out for a walk.”

“We have had trouble because of the increase in the number of street dogs. They are wild and they chase people,” says Ankita Tiwari of Manikonda.

Ramya Krishna of Mathuranagar, Yousufguda, says, “There is a stray dog in the vicinity which is weak, suffering from a severe skin disease, and bleeding from its eyes. The dog smells bad and runs after people; kids are scared of it. Stray dogs can spread diseases.”

Another major issue is the lack of streetlights. Ramchander Rachakonda says, “There have been no streetlights in Shardanagar, behind the Karwan Branch ATM of Andhra Bank for the past six months. I have made many complaints to this effect, but, no action has been taken.”

It is the duty of an immediate local leader to accept and resolve basic civic complaints. These leaders must act as bridges between citizens and the GHMC.

Most corporators – the elected representatives of the people – have nothing to do with the people once they are elected, and rarely visit their wards, which are often in a shocking state of neglect.

The Serilingampally constituency generates the highest revenue for the GHMC in terms of property tax and land registration. The constituency has over `600 crore of paid tax amounts. However, residents don’t receive basic civic amenities such as power.

“The GHMC established ward committees to solve the problems of people with large number of population. Chandanagar division ward office was not allocated for two years eventually ward committee meetings were not held in Chandanagar division. Every two months a meeting has to be held, according to the corporation itself. However, the first meeting was held after two years, in January 2018,” said Rama Kiran of Serilingampally.

Syed Iftekar, a resident of Kondapur, said that his corporator Sheik Hamid Patel, has failed to address the sewerage issue in the division.

“Hafeezpet is flooded with sewage and lacks roads. The budget for cement-concrete roads in Cyberhills, Hafeezpet, and PJR Nagar has been allocated after two years. Residents complain that even when allocations were made from 2014, nothing has progressed in the division,” he says.

A common complaint is that corporators who beg for votes during election time don’t visit the wards regularly once elected and are not accessible. Not all corporators have designated offices within the ward.

The problems are so acute that senior officials of the GHMC have been asked to go on field visits instead of spending most of their time in their offices.

Arvind Kumar, the new principal secretary in the department of municipal administration and urban development (MA&UD), directed GHMC commissioner Janardhan Reddy to appoint a senior official for each ward, or at least each circle.

These officials should visit their respective wards/circles and improve the condition of the roads and sanitation there. #KhabarLive