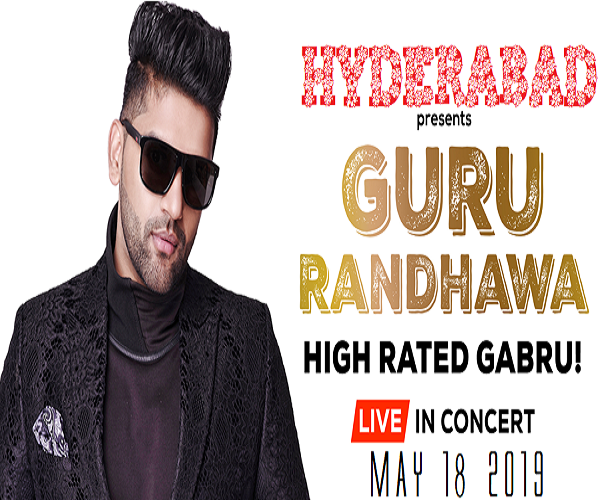 Bollyboom, the premium Bollywood Dance Music Property of Percept Live, is all set to bring back multi city tour with the chart topping artist and The High Rated Gabru of India – Guru Randhawa, in 15 cities this year. The first phase of the event will be held from 18th May 2019 to 8th June 2019 in 7 cities.

The enthralling 1st phase of multi city tour will kick off on 18th May in Hyderabad and end in Jamshedpur on 8th June with the King of chartbusters taking the center stage.

After a highly successful first edition of the Bollyboom Guru Randhawa High Rated Gabru tour last year which went across 8 cities in the country entertaining 80,000+ people and his first concert in Malaysia which was attended by thousands of enthused fans at the KL Live – Life Centre. The second edition will span across the country covering several markets where the superstar singer hasn’t performed yet.

Fresh off the launch of his brand new single, Guru Randhawa will be performing his latest chartbuster Slowly Slowly, his new song in collaborated with Mr. Worldwide, Pitbull which which released on 19th April along with his other popular chart topping songs. Guru Randhawa is currently the most viewed Indian singer on YouTube and he continues to rule the hearts with tracks like High Rated Gabru, Suit Suit, Patola, Ban Ja Tu Meri Rani, Lahore, Kaun Nachdi, Morni Banke and many more.

With phenomenal numbers in terms of YouTube impressions, Guru Randhawa ranks amongst the biggest live performers in the subcontinent. Slowly Slowly, has clocked more than 65 million hits and is only climbing up the charts. The live performance of this Indie pop star is expected to blaze the stage apart.

Talking about his upcoming Bollyboom tour, Guru Randhawa said, “2018 has been an incredible year for me. There is no better feeling in the world for an artist than to perform live for his fans and that is the feeling I crave the most! Last year was indeed an extraordinary feeling to perform with Bollyboom and experiencing the love and support of my fans. I am really excited and charged for my performance in this tour on a grander level this year.”

Percept Live is India’s leading LIVE IP outfit which will make this tour a memorable one for fans and admirers of Guru Randhawa and Bollywood Music alike. Bollyboom promises it to be once in a lifetime and one of a kind experience for music fanatics across the subcontinent. With the biggest sensation of this year, Bollyboom Guru Randhawa High Rated Gabru India Tour 2.0 is likely to set the hearts of music aficionados on fire.

Commenting on Guru Randhawa High Rated Gabru India Tour 2.0, Business Head of Bollyboom – Percept Live – Mr. Janamjai Sehgal said, “Post the success of the tour last year, we are elated to bring back Bollyboom with Guru Randhawa to the Indian audience. It surely will be bigger, grander and better than the last time.

The response that we received from the audience last time was enormous, it truly made our tour the most loved musical tour of 2018 in India, building on such love and support by the fans this time we have made sure that the shows happen in those cities where Guru has not performed before so that we can reach audiences at a wider scale and entertain Guru fans everywhere”

The tickets for Bollyboom India Tour with Guru Randhawa 2.0 in
Hyderabad (18th May)

Tickets are available on BookMyShow.Com