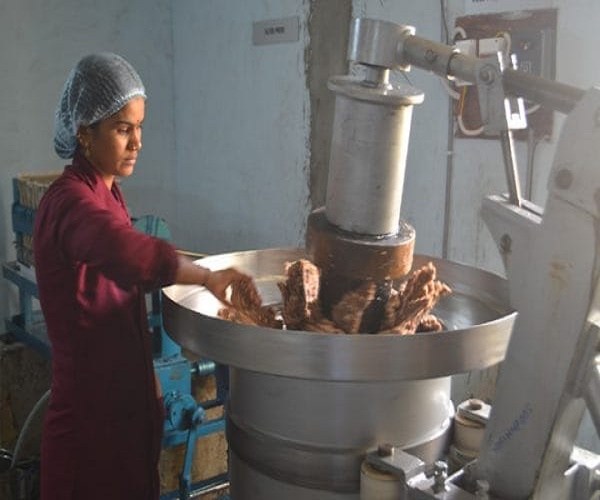 Parvathi (27) and Sreevani (30), both residents of Dattaipally village in Wanaparthy mandal used to be homemakers, occasionally going for NREGS work about 6 months ago. Today they make Rs 6,000 per month after emerging as a successful enterprise.

All credit goes to District Collector Sweta Mohanty, who worked with a vision to promote groundnut products of Wanaparthy. The Groundnut Processing Centre started at Dattaipally is today not only known for quality food products, but creating jobs, helping women members of self-help groups.

The processing unit has been producing ‘Wana Chikki’ (groundnut and jaggery sweet) and pure unrefined groundnut oil for the past couple of months and is going to start producing peanut butter from the groundnut produced in Wanaparthy, which is known to be the best export quality groundnut in the entire world.

Wanaparthy Mahila Samakhya of SHG women under Society for Elimination of Rural Poverty (SERP) is running this processing unit after getting training from experts. 2000 litre pure groundnut oil has already been sold and stock of chikki produced here is getting sold-out quickly.

The initial idea was that the groundnut procured by government from farmers would be sent to this unit for manufacturing food products, Mahila Samalkhya spent Rs 9 lakh and procured it from farmers in Wanaparthy mandal.

According to Wanaparthy SERP APM Bucchanna, the Samakhya is in the process of establishing Farmers’ Groundnut Producers Groups from the families of SHG women who produce groundnut in villages. A group would contain 20 SHG women and at the mandal-level a Groundnut Farmers’ Federation would be setup with these women.

“Previously, in SHGs, loan money used to be circulated and used to be repaid. SHG women are now learning aspects like production, value addition and asset creation, which they were previously unaware of,” Bucchanna told #KhabarLive.

What the federation would do is that they would procure groundnut from farmers in these groups with SERP taking care of the investment part. SERP would provide them all assistance from giving quality seed, supporting these farmers throughout the cropping cycle, including procurement, by paying them good price after grading the produce.

“With this, we would eliminate middlemen and unnecessary charges for farmers in transportation and labour in markets. The produce required for food processing would be sent to the processing unit as per demand and the rest of the seed would be processed and distributed back to these farmers,” he added.

Coming to the marketing part of chikki, groundnut oil and peanut butter, presently SERP is managing that part. The products are being sold to supermarkets in Wanaparthy and Hyderabad for a low price. Even Telangana State Oil Federation has agreed to procure 1000 litre groundnut oil from this unit every month. There are also people who are buying products directly from the unit.

While 50 gram chikki is packed and sold for Rs 10, which is being sold by other companies at Rs 20 in the market, groundnut oil is being sold at Rs 220 per litre, which is cheaper than Rs 280-300, which is the prevailing price for pure unrefined oil in market.

Even the groundnut pulp residue after oil is extracted, has a lot of nutritive value and is high quality fodder for cattle, according to Ramu, an electrician who works in the unit. This pulp, which is sold at Rs 35 per kilo to farmers elsewhere, is being sold at Rs 25 at this unit. It has been getting sold-out because it is in high demand because of high milk production in dairy animals due to this pulp.

The workers say that the unit currently operates with a capacity to produce 30 litre oil in a day and 600 chikkis in a night shift. Presently five SHG women and three men are working in this unit which is being run at rented premises, if a permanent structure is built and if production scale increases in the near future, many more people can get employment here.

Regarding marketing, linking social welfare, tribal welfare, BC and minority residential schools to procure food products from here would not only ensure assured sales, but could also bring about a qualitative change in the health of children from weaker sections, opines Bucchanna.

As of now, the processing unit has already received a trademark and chances of exporting the products abroad is not far from becoming a reality.

The only threat to survival and expansion of this great effort is the unhealthy jealous convent school mentality of (some) bureaucrats, who tend to neglect or discontinue successful ‘pet projects’ of their predecessors when someone gets transferred or promoted. #KhabarLive