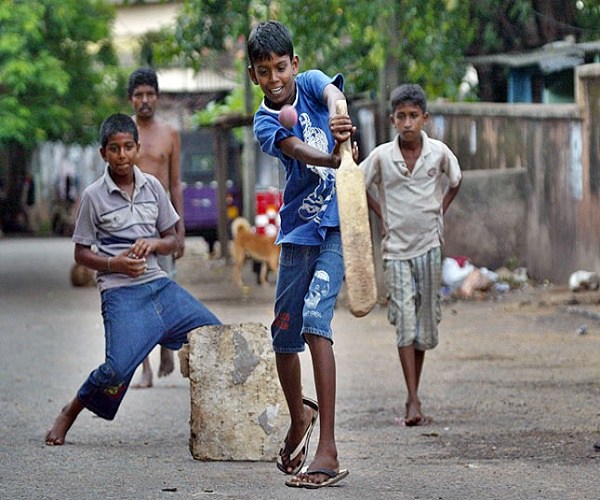 A sport becomes the heartbeat of a nation only when its inhabitants start playing that sport. It may be in the backyards of houses, parks, streets, open spaces, play grounds or sometimes even classrooms; there is where the ultimate passion for the sport bundled within vibrant hearts dwell – proclaiming the rich heritage, culture and history of the sport in their respective countries.

As far as cricket in Hyderabad is concerned, it is the streets where the genuine zest for cricket breathes. Cricket games would start as early as sunrise and would continue late after sunset if street lamps can provide ample lighting, until parents decide to interfere. It is in the streets where unweary bowlers hurl out balls from morning through afternoon till dusk. Money or contract disputes can never stop games here. A bottle of cold drink would be an adequate incentive to joust like hungry lions with the opposition. Rain will never stop play; wet pitches will seldom halt games.

Cricket in streets “unite worlds, tear down walls and transcend race, the past, and all probability”. There is an infinite amount of talents lingering in the streets across Hyderabad. However, it is an elite class of a team that gets the chance to play cricket professionally. Despite being laden with inconceivable talents, street cricketers are often found to be too raw and crude to get into mainstream cricket. There is hardly any recognition for a street Demi-god, that once ruled cricket in his area.

Why should we advocate street cricket?
First and foremost, Hyderabad’s greatest treasure of cricketing talents lounge in the streets. From Azharuddin to Mohammed Siraj, everyone has grown up as cricketers in the streets. A cricket bat to a child in Hyderabad is nothing short of a treasure. Spinners who bowl both leg-breaks and off-breaks, fast bowlers who can swing even a tennis ball, batsmen who can whack balls to smash window panes: all exist in the streets.

Whether or not they take their game to the next level by entering the white-collared hard ball cricket would sit between a street cricketer becoming an international star and petering out like street lights into oblivion. Unlike school cricket and club cricket, there is a plethora of talent to reckon with. You have a humongous number of personnel to chose promising talents from.

In Sri Lanka, where school cricket still rules the roost, finding fast bowlers of supreme quality out of schools is a rare phenomena. The current Sri Lankan pace bowlers, Lasith Malinga, Shamind Eranga, Nuwan Kulasekara and Nuwan Pradeep, all hail from the streets, beaches and palm grooves of Sri Lanka. It was once-an-amateur cricketer’s penchant for running in and bowling as fast he could that bounced Jimmy Anderson off the penultimate ball of a Test match, to deliver Sri Lanka its maiden Test series win over England.

The next major reason, why we should harbour street cricketers, is because they are self trained. They do not look for coaches to overhaul their performances and find fault. Under pressure situations they do not look for the captain or the senior bowler to discourse advices. Most of them are independent and are self motivated. If not, survival in streets would not have materialized.

More often than not cricketers from the streets become their own coach, for they learnt the art of cricket through television. Street cricketers are independent and are capable of being their own mentors, helping them circumvent any practical challenges. Of course they will need expert guidance but they are not entirely dependent on them. Wasim Akram branded Mohammed Shami as some one who needs to be motivated to unleash his full potential, something that fast bowlers from the streets are capable of doing themselves.

Street cricket can also be a breeding ground for unabashed, disparate and unorthodox cricketers who are the need of the modern era. There have been many cricketers who developed their own unique recipe for cricket through their own experiments in backyards and streets – who have enriched the world of cricket with their mavericks.

The great Sir Don Badman had a idiosyncratic grip and an unconventional stance, thanks to his younger days during which he practiced hitting golf balls that bounced off the sinus tank in the backyard, with a stump.

Javed Miandad was veritably a street batsman in action in the top most echelon of the game. He had unorthodox ways of scoring runs; the famous six that he hit off the final ball against India was hit with an open stance. Yet his Test average never trickled down below 50.

Sanath Jayasuriya had a square stance and had an aversion to playing balls along the ground. His unorthodox ways of manufacturing shots opened up spaces in the ground where a ball of a particular length would not have reached before. A full ball on the pads was not not flicked through midwicket but instead was “picked up” over square leg.

Virender Sehwag hardly moved his feet but laced balls through all gaps in the filed.

Dilshan opened his front foot even before the ball was bowled, yet played shots all around the ground.

The aforementioned cricketers never came from the school of orthodox cricketers. Even though most of them played elite level cricket in their younger days, it was their quirkiness and unique shot making that made them stand ahead of the rest. Cricket in streets would engender more unorthodox cricketers who can become the flagbearers of a nation, should it be harnessed properly.

Lasith Malinga’s laser guided yorkers and slingy actions were not the result of the sweat shedded in the nets. They evolved through a teenage lad who admired Waqar Younis and aped his slingy action to hurl burnt tennis balls at the toe of batsmen in a remote village of Rathgama.

Nuwan Kulasekara’s pin point accuracy with the ball rose from countless parsimonious spells he bowled in his village.

Shaminda Eranga was never taught to bend his back and use his wrists to generate pace during his life in the peri-urban Kurunagala. Yet he could bowl fast enough to earn him a place in the Chilaw Marians team ahead of many fast bowlers who spend day in, day out in the nets to perfect their bowling.

Nuwan Pradeep touched 150kmph when no other bowler who played leather ball cricket could.

When the Indian batting lineup was hoodwinked by Mendis’s carom balls, street urchins guffawed at the so called “great” batsmen’s inability to pick a ball that was a weapon in the arsenal of even the most ineffective street bowlers.

Dilscoops and switch-hits are the most orthodox way a batsman can score runs in the streets. You come across ambidextrous batsmen who can turn extra cover into cow corner and throw the kitchen sink at it, so that the ball settles on the drawing table of a flat on the sixth floor, shattering all window panes in its way. You come across bowlers who can spin balls at pace and flick balls off the hand that can slither away from batsmen.

Let it be the the invincible West Indies of the 80s or the Sri Lankan dark horses in the 1996 world cup, the primary factor that governed their victory was their not-over-coached cricket and their unabashed technique.

It was innovation and self-recognition that made Murali use his wrists to spin the ball from off to leg and that was what made Sanath to go over the top in the first 15 overs. Most of world’s great cricketers are heterodox stalwarts who did things in their own way.

On the flip side, promoting street cricket has its own detrimental effects. It can be a breeding ground for illegal bowling actions and substandard batting techniques. The latter is a tad contentious issue, since players like Bradman and Miandad parlayed the technique they adopted in the streets and backyard to fit competitive cricket. Rohan Paulpillai, who was an eminent street cricketer and who scored around 17 five-over fifties was the most technically sound Ceylon school boy cricketer since Mahadevan Sathasivam.

Another practical problem that can plague the endorsement of street cricket would be the difficulty in bridging soft ball cricket and leather ball cricket. A cricket ball can never be swung in the same way a tennis ball is swung. A leather ball cannot be squashed to make it spin as it is the case with tennis ball. Leather balls tend to skid and scuttle to the bat unlike tennis balls which stop and bounce allowing batsmen to get underneath the ball.

Reparative Measures
Certain measures can be adopted to help the transformation of a street cricketer into a leather ball cricketer. Coaching camps can be held during school holidays free of charge to help talented kids from streets learn to bowl and bat with a willow and a leather. However, their natural proclivity should not be modified, since they would end up being positively dangerous. Instead the natural flair of these players should be metamorphosed to tailor professional cricket.

Another thing that can be done is to introduce tape balls into the culture of street cricket. Tennis balls wrapped in electrical tape is akin to a cork wrapped in leather: it swings in the air and skids on. Sri Lanka cricket introduced a new type of ball called “tuff ball” which is in between soft ball and leather ball in makeup, helping cricketers bridge street cricket and hard ball cricket.

Pace contests can be conducted to spot bowlers who can bowl lightning fast so that they can be trained to play at the higher level.

“Another letter postmarked from a remote village in Sri Lanka had the writer claiming to be the fastest undiscovered bowler in Sri Lanka. A district coach investigating this claim found the writer to be a teenage Buddhist priest who insisted upon giving a demonstration of bowling while still dressed in his Saffron-colored robes.”, swanked Sangakkara in his MCC Lecture, which shows the diverse hierarchies of society that street cricket has had an impact on.

It is true that there is a huge gulf between cricket in streets and professional cricket. Not all talented street cricketers will become international super stars. But once in a while street cricket can produce gems that can keep the glory of their nation glowing.

Groundbreaking style of batting that questions perceptions of authority – fresh from the streets, can be the X-factor teams in modern days yearn for. Although there have been sporadically scattered talent hunt programmes to find the myriad of talents enshrouded in the streets, none of them are properly organized or constantly employed to provide an avenue for lads from streets to progress in to the hallowed nets.

Can Hyderabad harness the enormous talents of its cricketing urchins, as Brazil did with street football? #KhabarLive