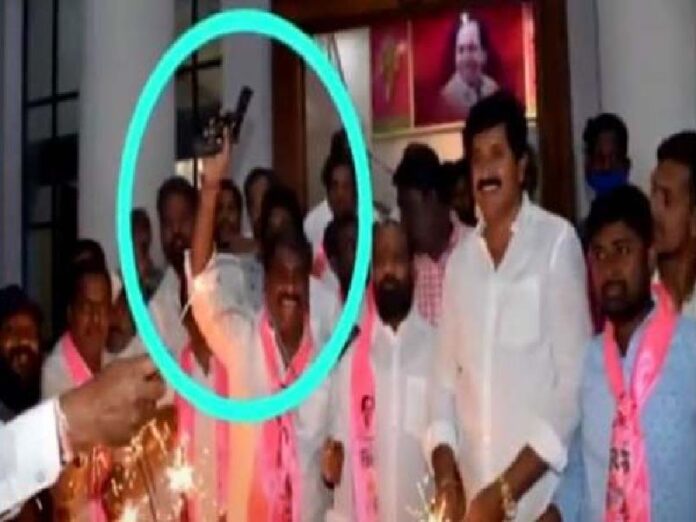 One of the TRS leaders created a ruckus with a gun in the Telangana Bhavan. The incident came to light a day late though it took place on Saturday. It may be recalled that the TRS members indulged in celebrations after the victory of TRS candidates on Saturday evening at Telangana Bhavan.

However, the leaders presented there stopped Srinivas Yadav from doing so. While controlling his over enthusiasm, Srinivas Yadav quietly kept the gun back in his pocket. TRS MLAs Danam Nagender and Maganti Gopinath and several party leaders and activists were in the Bhavan when the incident took place.

The taskforce police later seized the gun from Kattela Srinivas Yadav while visiting his residence located in Secunderabad on Sunday, as Banajara Hills Police Station ACP Sudharshan was dealing with the incident. It is learnt that the police will send the gun to the forensic lab for tests. However, the police are yet to file a case, it is learnt.

It is also learnt that Srinivas Yadav later stated that the gun was not an original one and it was a toy gun. He also stated that bringing out the gun was part of lighter mood and he did it for fun. Coming to know about the gun issue, the TRS party high command enquired into the incident. The TRS working president and IT Minister KT Rama Rao’s personal secretary spoke to Srinivas Yadav and asked the latter to cooperate with the police.

According to rules, cases would be filed if a person displayed a gun publicly and if the persons gave an impression that it was an original gun while it was a toy gun. However, according to police sources, the gun displayed by Kattela Srinivas Yadav was an original one. #KhabarLive #hydnews