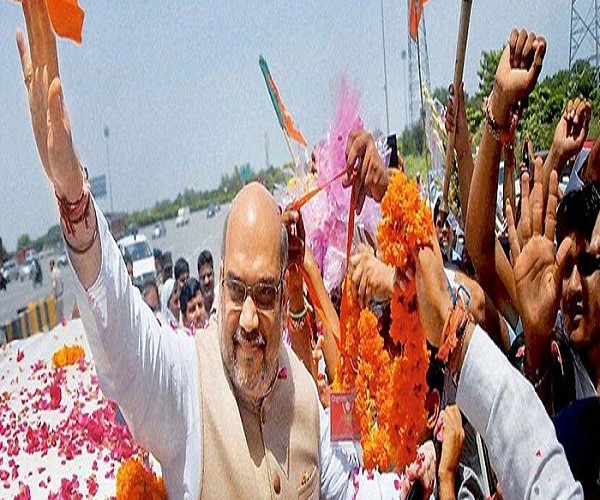 The Bharatiya Janata Party (BJP) withdrawing support from the Mehbooba Mufti government in Jammu and Kashmir points to the kind of line which the party intends to follow in the run-up to next year’s general election not only in the state but in the country in general.

The series of recent by-election defeats, the inability to form a government in Karnataka and the uncertainty about its prospects in the three state assembly elections this winter have apparently led to a firming up of the BJP’s strategy in favour of a hard line.

Having seen that the inclusive “sabka saath, sabka vikas” pitch has not been noticeably successful in winning over the fence-sitters, the party appears to have opted for a hawkish stance. And where else can such a policy have a more visible impact than in the Kashmir Valley?

As Ram Madhav, the Rashtriya Swayamsevak Sangh (RSS) man in the BJP has conceded, the party’s base in Jammu and Ladakh – the two non-Muslim regions in the state – was being eroded on account of the perception that it was being compelled to pursue a soft line in tackling the militants because of its alliance with the supposedly pro-separatist Peoples Democratic Party (PDP) with its roots mainly in the Valley.

The PDP’s opposition to Article 371 of the Constitution of India, which grants a special status to Kashmir, and to the Armed Forces (Special Powers) Act was tying the BJP’s hands in the view of its supporters. The PDP’s preference for an extension of the Ramzan ceasefire was another instance where the two parties did not see eye-to-eye.

It was only a question of time, therefore, before the rupture took place. It was an unlikely alliance anyway between an avowedly pro-Hindu party and a party of Kashmiri Muslims which was believed to be in broad agreement with the sentiments in favour of azadi (freedom) if it meant greater autonomy for the state and a reduction in the army’s visible presence.

The BJP must have also been uneasy about the possibility that the PDP will strike first. There were two occasions when it might have done so. The first was after the horror of the rape of a Muslim child in Kathua where some of the BJP’s followers wanted the case against the accused to be tried by the Central Bureau of Investigation rather than by the state police. And the second was when the centre decided not to extend the Ramzan ceasefire.

Mehbooba Mufti’s inexperience may explain her failure to act even when she could not have been unaware of the fact that her party was losing ground among its supporters because of the alliance with the BJP. The gainer will be undoubtedly the National Conference, which is why it wants the state assembly dissolved followed by an election.

The BJP, on the other hand, does not seem to have much interest in the Valley, where it secured a measly 2.2 per cent of the votes in 2014 and won no seats. It didn’t win any seats in Buddhist-dominated Ladakh either. The BJP won 22 of the party’s 25 seats in the 87-member assembly from Hindu-majority Jammu – a far cry from the pre-election “Mission 44” boast of party chief Amit Shah.

In any event, the BJP appears to have given up banking on the Muslim votes in any state. As much is evident from the reported listing by the BJP and RSS bigwigs at a conclave in Surajkund, Haryana, of the three negative factors – farmers’ distress, Dalit alienation and the proposed unity of opposition parties – which the BJP will face in 2019. Evidently, the BJP believes that any effort to win over the Muslims is of little use.

However, the BJP will be making a mistake if, as a corollary to its policy of ignoring the Muslims, the party resorts to what its opponents call the polarisation of society on communal lines to consolidate its base among the Hindus.

While the impact of such a policy in areas outside Kashmir will be on less inflammatory matters like extolling historical figures like Maharana Pratap at the expense of Akbar, or refusing to renew the passport of a Muslim married to a Hindu woman, it will be unfortunate if a side effect of a hard line in Kashmir leads to a rise in the number of clashes between the security forces and the locals.

Since the latter comprise an increasing number of teenagers who throw stones to disrupt the anti-terrorist operations carried out by the security forces, the army and the police will have to be extra careful when dealing with the young radicals who even include girls.

The caution is needed all the more because the involvement of the youngsters underlines the psychological gulf that has opened up between the security forces and the school- and college-going kids. As long as the PDP was in the government, there was a link, however tenuous, between the law-enforcement machinery and the locals.

Now that the BJP’s hand will be seen behind the governor’s rule, the gulf can become wider, making the task of the government reaching out to the ordinary people all the more difficult, especially if the security forces pursue what has been called a muscular policy.

For the BJP, however, losing the hearts and minds in the Kashmir Valley is a price which the party is apparently willing to pay to make electoral gains among the “nationalists” in the mainland. #KhabarLive