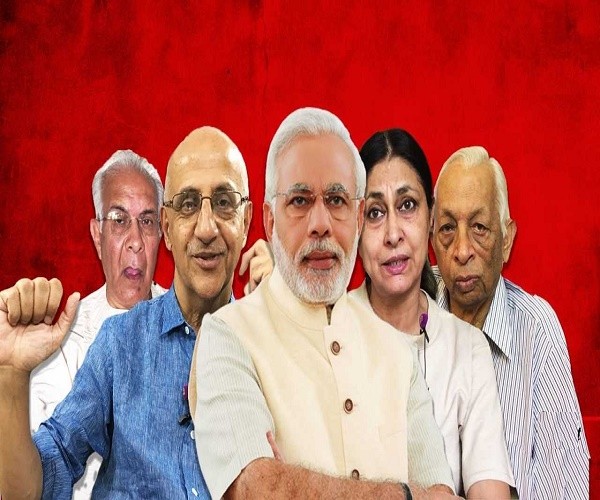 With horrifying cases like the Kathua and Unnao rapes making news, India is in her darkest phase since the Independence struggle, say former bureaucrats,

KhabarLive spoke to four of the 49 retired civil servants who penned an open letter to PM Narendra Modi, on 15 April, accusing him of the prevailing environment of radicalisation and cruelty in the country.

If a community feels that they are not safe, if a particular caste feels special that they will be tortured, if this is the atmosphere then you will have to ask whether we want another split in the country after what happened in 1947.- Mira Borwankar, Retired IPS Officer

“The government is backing the people who are committing crimes. That means even though the slogan was ‘Beti Bachao’ in reality it is ‘Save the Rapist’,” said retired IAS officer NC Saxena.

The atmosphere of hatred created is an important part of their (BJP’s) politics. On the basis of that, elections are fought and won. – Harsh Mandar, Retired IAS Officer

On being asked why they addressed the Prime Minister directly, the four said that they did so because only two people in the BJP decide the party’s agenda.

“This is a very dark period in which the society has been divided in the country on the basis of caste and religion,” said retired IPS officer Mira Borwankar.

Moreover oppression on women is on the rise. After that (in the Kathua and Unnao affairs) the accused were being protected – it was at this point when we thought that we should come forward and speak.

“In the last 2-3 years, rather than a decrease, there has been an increase in cases of atrocities against Dalits and crime against minorities,” NC Saxena, Retired IAS officer said.

“Our Nizam has proved to be a failure. If such (Kathua and Unnao) incidents happened in our districts, then we consider him as our failure,” Wajahat Habibullah, Retired IAS officer said.

This is pattern where not only killing someone or raping them but committing these crimes with a lot of cruelty. We are getting very far from the kind of freedom that was envisioned during the fight of independence and by the Constitution of India. – Harsh Mandar, Retired IAS Officer

The civil servants point out that the incidents in Kathua and Unnao are not to be treated as instances of crime alone.

When cabinet ministers of the government and senior BJP leaders talk about hatred, and the alleged killer of Akhlaq was wrapped in the tricolor – at such times, he (PM Modi’s) did not intervene. So the things that speak on or do not speak, they matter a lot. Everyone is watching the atmosphere of hatred being spread is an important part of their politics. On the basis of that, elections are fought and won.

“The Prime Minister has spoken up on the rape incidents, it is a good thing. Mehbooba Mufti also took action. But how many days later? The case of Kathua was reported on 17 January,” retired IAS officer Wajahat Habibullah points out.

What is the need to organise the majority of the country and the powerful community in the country? The need for empowerment is among the Dalits, women and minorities. It’s a matter of concern. Organisations like RSS are reminding us of the Nazi regime of Germany.

We have seen the ground reality. People who counter Hindutva with logic are being been killed in Pune, Bangalore and other places. We are not talking without substance. If the government is providing protection instead of preventing these rapists, murderers, then our anger will be vented somewhere.

As the Lok Sabha elections draw near, will the prime minister take the civil servants’ warning seriously? Or will he ignore their plea? #KhabarLive