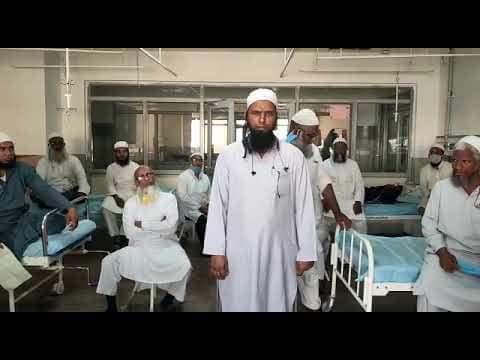 News appeared in social media that hospital in charge in Ghaziabad hospital has complained to the police authorities of unruly and disgraceful behavior on the part of some Tableeghi jamat members from the Nizamuddin Markaz admitted for diagnosis.

The news explained the disgraceful behavior as it said that the Tableeghi members indulged in undressing and moving about naked and taunting the hospital staff and even spitting at them.

Now this news has gone viral and the entire Muslim community has been vilified because of this news.

At the first instance when I got the news from a very senior journalist whom I personally knew I was shocked to cry; You Too Brutus!

Since, I know Tableeghi’s from childhood I can pledge my life that they are incapable of such indecent behavior. They are too conservative folks to do such things. They are really pure by heart and bode no ill against anyone in this world. Their outlook philosophy is too puritan to commit obscenity or vulgarity.

My quick reaction was its planted news to create hatred and enmity among the religious communities.

As a journalist to me unverified news is garbage to be thrown in dustbin and since it can’t be trusted it is a sin to circulate to wider audience.

As afterthought my second reaction was; Tableeghi’s may have been treated with criminal intent by those doing corona tests on them, any such misbehavior may be a reaction.

However, I am convinced about them they cannot indulge in any indecent behavior. I felt if there was any proper counseling, they may not have reacted as it was told in the news that they have done.

At a second read, when I went to the news item once again, I could clearly make out the motivation and communal interests attached with the news.

The news says the hospital authorities had complained to the police against the Tableeghi’s indecent activities. Now, if the complaint was made then the police should have booked the culprits on charges of obstructing of duties, jeopardizing public health, obscenities, disorder and promoting communal hatred etc.

However, nothing of any such sort ever happened in the aftermath of the alleged complaint. What actually happened was fake news was peddled in the media as a queer news and media lapped it. The peddlers were successful in communalizing and polarizing the society.

Now when the country is put under disaster management act such fake news should have attracted penal action. How come such news that is despicable in nature was allowed to be circulated even in some respectable news media are parties in the crime.

This shameful allegation against some members of the Tableeghi Jamaat is obviously done by some vested interests with criminal intent.

One needs not to be a journalist as even a sophomore in journalism can discern that this news is fabricated, motivated and malicious in nature.

In fact this news item deserves a PIL and the guilty must be arrested on the charges of sedition. #KhabarLive