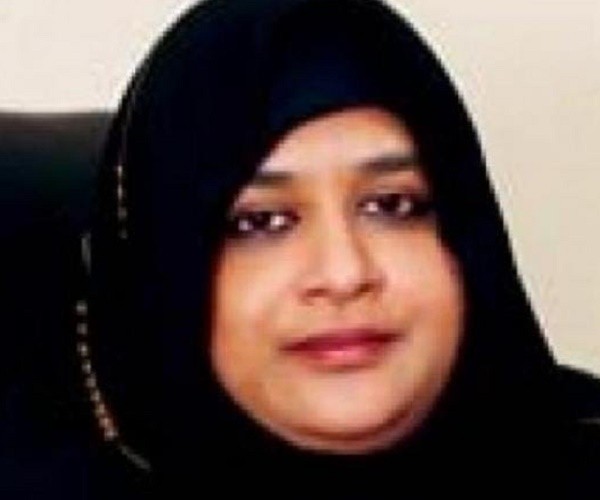 Nowhera’s fall has been swift, but questions remain why she was allowed to continue business for so long. She, now arrested by the Hyderabad and Mumbai police for a massive Ponzi-like scam, took great pains to appear to be a philanthropist, an educationist and an entrepreneur.

The 44-year-old globetrotter also claimed to have been awarded a Doctorate of Philosophy from the Open International University, Colombo (Sri Lanka).

Nowhera did her best to portray herself like a respectable, successful entrepreneur. But behind this impressive-seeming facade, she ran a network of sham companies whose sole purpose was to take money from stakeholders belonging to the Muslim community. The logo of her firm, Heera Group, is ‘In the Interest of All Mankind’.

What made Nowhera such a reputed personality was not her lavish lifestyle (although that’s certainly played a part). It was her professed desire to educate people.

The lifetime vice-president of the women’s wing of the International Human Rights Association, India, wanted to be an entrepreneur ever since she was a child. Her first step into the world of entrepreneurship was when she began helping her parents sell vegetables.

The scam artist, who came up with a Ponzi-like scheme, has allegedly cheated investors of an estimated Rs 1,000 crore. “So far we have reported more than Rs 200 crore,” says Ram Kumar, ACB, Central Crime Station (CCS)

She is now a single mother, after marriage to three men in quick succession. “She was also planning to start a medical college on a 100 acre property for her son, who wants to become a doctor of medicine,” confirms the CCS official.

Nowhera Saikh received a host of awards: the Rajiv Gandhi Shiromani Award for Outstanding Individuals and Distinguished Services to the Nation, the Mumbai Ratan Award 2013 for Outstanding Contribution in the field of education and human service, and the Bharat Gaurav Award in 2014.

All this only added to the lustre of her reputation and in November 2017 she did the inevitable- she formed a political party, the All India Mahila Empowerment Party, and contested the recently held Karnataka assembly elections.

If this sounds too good to be true, it was. Nowhera’s business turnover increased from Rs 27 lakh to Rs 800 crore between 2010-11 and 2017-18. But on October 26, 2018, Nowhera Shaik was arrested in the Rs 500 crore Heera gold investment fraud case by the Mumbai Police and the court remanded her to police custody.

“During the investigation done so far, it has been found that more than 10,000 investors have applied for withdrawal of their money amounting to more than Rs 200 crore,” says Ram Kumar, the CCS official.

The Hyderabad police has identified more than 160 bank accounts across India belonging to the Heera group and are seeking more details from the banks.

Obviously the scam is not limited to a few individuals like the complainant in this case but has affected large numbers of investors and requires in-depth investigation.

Nowhera has approached the Supreme Court and filed a Writ Criminal Miscellaneous Petition No. 303 praying for bail and a stay on the proceedings in all the cases. After hearing both sides, the Supreme Court dismissed her petition on November 19.

The investment scheme Nowhera ran essentially saw her taking investors’ money, promising to invest it so that they got high returns, then simply spent it on herself.

“Her modus operandi is collecting money in the form of deposits on the pretext of selling and purchasing of gold and offering a higher interest rate of 36 per cent annually on every one lakh investment. She has been a defaulter since June 2018,” says ACP CCS.

Nowhera expanded her business in several countries – China, Canada, Dubai – and in the states of Maharashtra, Karnataka, Tamil Nadu, West Bengal, Telangana, Andhra Pradesh and Rajasthan. The Heera Group expanded and diversified into various sectors such as gold, trading, textile, jewellery, mineral water, granite, tours and travels, real estate, electronics, E-commerce etc. Nowhera and her company came to the attention of the Central Crime Station in 2012 after several complaints of cheating were received.

The CCS then issued summons for her to appear before it and asked her to furnish documents of her company, which she declined to do and then absconded. She was arrested by the Mumbai police in October this year. The Enforcement Directorate had booked the company under the Foreign Exchange Management Act (FEMA) and for hawala transactions in 2014.

Nowhera’s fall has been swift, but troubling questions remain about why she was allowed to continue her business for so long. Though Nowhera was in the public eye, she was able to sidestep the usual rules and regulations.

Anjani Kumar, Hyderabad police commissioner, says, “Ever since it came to know about the illegal methods of transactions of this lady, the department started building up records. It takes time in such cases. We required bank information. But once there was prima facie evidence that there were a lot of irregularities in the way money was collected, the department took action and arrested her. It was the Hyderabad police that gave the lead to other city police forces and they swung into action. The CCS team under DCP Avinash Mohanty has done a commendable job.”

Dodgy scheme
Nowhera Shaik was arrested by the Central Crime Station on October 15, in a case booked under IPC Sections 406 and 409 (criminal breach of trust), 420 (cheating) and 506 (criminal intimidation) and Section 5 of Telangana Deposits of Financial Establishment Act and Sections 3, 4, 5 and 6 of the Prize Chits and Money Circulation Schemes (Banning) Act.

She was arrested in Delhi and was produced at Nampally court on October 16. On October 24, Nowhera was given bail by the court. She was almost immediately arrested by the Mumbai police, who was searching for her following several complaints from depositors.

On November 14, the Hyderabad High Court cancelled her bail which was granted by the lower court. Nowhera, who is currently in the custody of Mumbai police, will be taken into custody by Kukatpally police, Crime Investigation Department of Andhra Pradesh and then the Central Crime Station.

This plant was inaugurated by the deputy chief minister of Telangana in January 2015. And yet no company or plant by that name exists at that address. Nor is there any intimation of a change in location. Foodex continues to use the above address in their packaging and is selling its products in Hyderabad and Mumbai. They seem to fly under the radar by processing home-deliveries taking orders over the phone.

In 2013, Nowhera Shaikh was accused of financial irregularities in the construction of an Islamic university on the outskirts of Tirupati, and in May 2014 she was the prime accused in the Rs 84.75 lakh international hawala case for which she was investigated by the Enforcement Directorate under FEMA. #KhabarLive