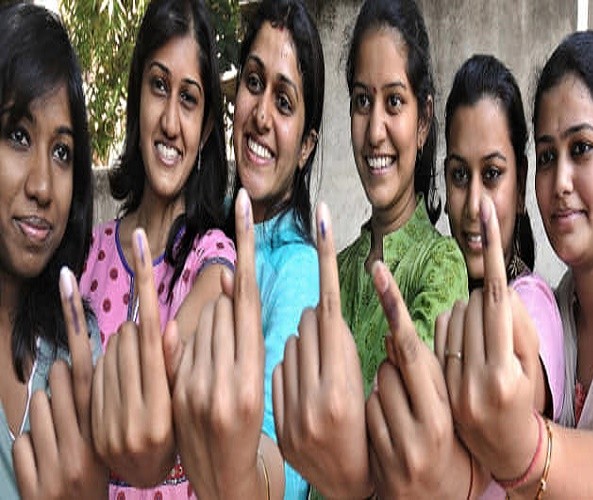 Colourful festoons, banners and fiery speeches are setting the tone for the upcoming Election Day, and a record 6 lakh first-time voters are excited and geared up to exercise their right.

How often does the citizen in you get celebrated? Rarely, isn’t it? That celebration, even in the largest democracy in the world, is a rare thing, because voters get a chance to be VIPs only when an election is round the corner, with the voted being the VIPs the rest of the time.

And this is that time when colorful festoons, banners, posters and pamphlets, accompanied by thumping music and fiery speeches, celebrate you.

But, are you celebrating the occasion? Or, are you among those who never vote, yet take to Facebook and Twitter, crying hoarse over how the system is decayed, how politicians take you for a ride, and how voting has become a ‘pointless exercise’.

They might have a few points; but, won’t it be a better thing to point out these after exercising your right to vote, to make your voice count, because, after all, it is you the taxpayer’s money that is going into the entire exercise and whatever happens after that too.

If you do not vote, you literally don’t count – be it in any forum. And for those who think they are rebelling by not voting, truth is that they are playing into the establishment’s ploy, because the establishment doesn’t want you to thrust your right into the ballot box and messing things up for it.

We are in the midst of that carnival of democracy which visits us rarely. From the rough and tumble of door-to-door campaigning, to a tense election day and the nail-biting process of counting votes, elections are, undoubtedly, a celebration of our democratic process, which one hardly can afford to miss.

With barely 20 days remaining for the D-day on Friday, December 7, it is time to begin preparing yourself, if you have got enrolled, and to go out and exercise your franchise and revel in the afterglow of having voted, of being a part of the world’s largest democratic process.

In cities, Election Day seems to have become synonymous with a public holiday – not to exercise one’s right to vote but more of a day to socialise, spend time with the family, stream a movie and lounge lazily at home. Urban voters also have a ‘political and emotional disconnect’ with the candidates, which is usually not the case in districts, where candidates do manage to connect with the voters at a more personal level.

This time around, things appear to be different and exciting. Political parties, individual leaders, voluntary organisations and even the Election Commission are finding unique ways to engage with first-time voters.

In fact, Facebook and Twitter have become the go-to social media platforms to connect with voters. This year, the elections appear to have triggered more interest, because a record 6 lakh first-time voters have registered in Telangana.

The belief is that the number of people who took the trouble to enrol will definitely make an effort to go out and cast their vote. The icing on the cake is the fact that a large number of first-time voters are from Hyderabad, an indication that this year the capital could do better on voting percentage.

Chief Electoral Officer Rajat Kumar has said that the Election Commission would reach out to managements of multinational companies through personalised letters, urging them to impress upon their employees to vote. A clutch of NGOs, civil society groups and corporates too have been proactive in reaching out to people and encouraging them for voter registrations.

So, instead of adding to that 47 per cent who did not vote last time, decide to make your voice heard and counted in that punchbowl of politics and on December 7, Go Out And Vote! #KhabarLive