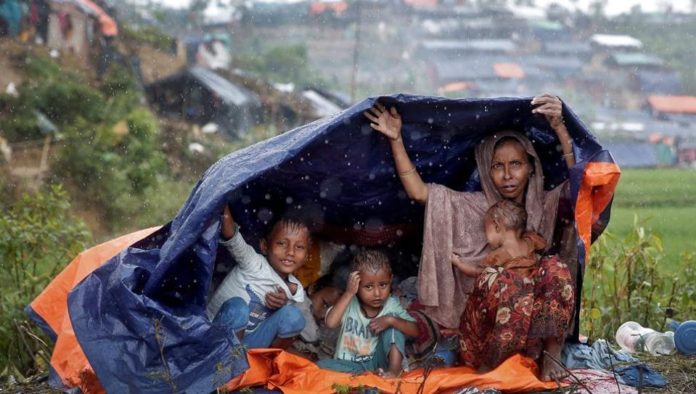 Modina Khatun stared blankly at the hilltop holding the grave of her 5-year-old daughter Romaida, the latest refugee to be buried in a makeshift cemetery overlooking a patchwork of thousands of plastic emergency tents.

Khatun’s daughter died on a hot morning last November in Kutupalong, a vast refugee camp in southeastern Bangladesh. Khatun had arrived in the camp just a month before. Like hundreds of thousands of fellow Rohingya Muslims from Myanmar’s Rakhine state, a brutal military offensive against Rohingya militants forced her family out of their home.

The trek to the border and across the Naf River had been hard, and the family was ill-prepared. Even at home in Rakhine, Romaida’s health had suffered under the strict government restrictions limiting Rohingya’s access to food and medicine. Once in the camp, the little girl quickly succumbed to malnutrition amid the squalid living conditions.

“Her tummy hurt. She had a fever … I put her in bed, but the next morning she wasn’t moving,” Khatun recalled about the day of her daughter’s death. No longer wearing thanaka ― the distinctive plant-based face powder that so many people in Myanmar don every day but is difficult to find in the refugee camp ―Her face appeared devoid of emotions as she spoke.

Khatun is one of almost 700,000 refugees, most of them Rohingya Muslims, who have crossed from Myanmar into Bangladesh since August to end up in a dozen overcrowded tent camps. While aid organizations have a relatively reliable tally of the number of refugees entering the camps, there is no dependable count of the number of people who die there. The fate of these refugees embodies what lies at the heart of the Rohingya crisis: A stateless people who were first persecuted in their own homes and eventually buried in a foreign land.

The World Health Organization has officially recorded over 300 deaths in Bangladesh’s refugee camps, 40 percent of them children under five. But the real death toll is likely much higher. Even to be in line with Myanmar’s general mortality rate of 8 people per 1,000 per year, reported deaths in the Bangladesh border camps would have to be at least four times as high.

WHO told HuffPost it’s aware that deaths have been underreported and a spokesperson said that the official tally only includes fatalities reported to health facilities. Aid workers often struggle to visit all areas of the camps.

That aid workers struggle to visit all areas of the vast camps is perhaps unsurprising. With more than half a million residents, Kutupalong alone has grown into the world’s biggest and most densely populated refugee camp in just a couple of months. It’s a seemingly infinite stretch of plastic, with tent after tent lined up behind one another. Precarious bamboo bridges help people to cross streams that will soon be filled with monsoon waters. It takes hours to walk from one side to the other.

A camp leader in Kutupalong told HuffPost in December that just in one area of the camp more than 200 people have been buried since August, further indication that the real death toll among refugees surpasses the official number. Small makeshift cemeteries, like the one where Romaida is buried, are scattered on hilltops throughout the camp. Patches of fresh red soil, sometimes marked out by bamboo canes and leaves, distinguish new graves from the old. Burials are dealt with at a community level, and take place shortly after death according to Muslim custom.

Extreme conditions, poor hygiene and a lack of resources are driving up the mortality rate across the camps. Pneumonia and diphtheria have become the major cause of death, particularly among children. Makeshift settlements and chokingly dusty roads which crack under the sun, like the ones in Cox’s Bazar, a sea-town and tourist center, make the perfect environment for the spread of those respiratory diseases. In Unchiprang, a smaller camp further south hosting some 20,000 people, a staggering number of boys and girls can be heard coughing while they play with toy cars made from plastic bottles down the steep narrow paths between their tents.

Unsanitary conditions have heightened the risk of complications during childbirth and increase women’s risk of pelvic infections. Poor hygiene conditions and a shortage of drinkable water have also heightened the risk of epidemic-prone diseases like cholera, acute watery diarrhea, measles and rubella. There have been tens of thousands of cases of diarrhea, abdominal pain and fever because of water contaminated with E. coli. WHO data shows that up to almost nine out of ten households in the camp have used contaminated water. A major vaccination campaign has so far limited the risk of a major measles and cholera epidemic. Aid workers say there have been cases compatible with cholera, but only the Bangladeshi government is authorized to confirm results of laboratory tests.

Malnourishment and previous injuries are weakening the refugees’ ability to overcome the illnesses they may contract. Many have faced hardship for years, often even before the latest military crackdown. Myanmar does not recognize the Rohingya as citizens, effectively making them stateless. More than 100,000 Rohingya live in apartheid conditions in central Rakhine, where foreign aid organizations have been forced to reduce humanitarian supplies in recent months. Access to food, health care and employment is severely limited.

As many as half of the Rohingya refugees in Bangladesh are not properly nourished, according to WHO. Almost 17,000 children are being treated for severe acute malnutrition.

Aidan Gromoll, a U.S. pediatrician working in the camps, recently met a 1-year-old boy weighing just 1.5 kg. “We weighed him but he could not stand up, he was all bones,” said Gromoll, who assists the nongovernmental organization DocMobile. The boy’s parents left before the medical staff recorded where his family lived, so they weren’t able to locate him. “We don’t know whether he is still alive,” she added.

In addition, many refugees are suffering from or recovering from violence-related injuries. Some Rohingya suffered severe burns when Myanmar troops torched their villages or were injured during military raids. Women have reported that members of the Myanmar military and vigilantes have raped and sexually harassed them during the mass exodus. Many are simply exhausted after the hardship of trekking for days.

Among those buried in one the makeshift cemeteries in Kutupalong is Safil Ullah’s father-in-law.

Ullah was the first in his family to flee. He left Rakhine after being trapped inside the office of the NGO where he worked for days, warned by his boss that it was too dangerous to go out. The rest of his family, including his pregnant wife and 4-year-old daughter, made the trip across the border later. His father-in-law, however, suffered a heart attack shortly after arriving in the camp. “It was the fear, stress and fatigue that caused it,” Ullah said while his daughter peeked out from behind his back.

For Modina Khatun, it’s uncertain what the future holds. “I don’t see any bright future here,” she said about life in Kutupalong.

Last week, Bangladesh and Myanmar closed a deal to repatriate the Rohingya back to Myanmar within two years. International organizations have raised concerns about how the Rohingya would be received once they go back. But it is unlikely that Khatun and her family will ever be able to return to live in their home and carry on their previous lives. Her home, made of poor inflammable materials, was burnt down. The Myanmar government has harvested and confiscated crops left behind by the Rohingya, and Modina said the fate of their land is uncertain.

Going back home would bring an additional pain. It would mean leaving the only place that bears testimony to her deceased daughter . The only things of hers she has left are some of her clothes.

“I always think about her,” she said. #KhabarLive