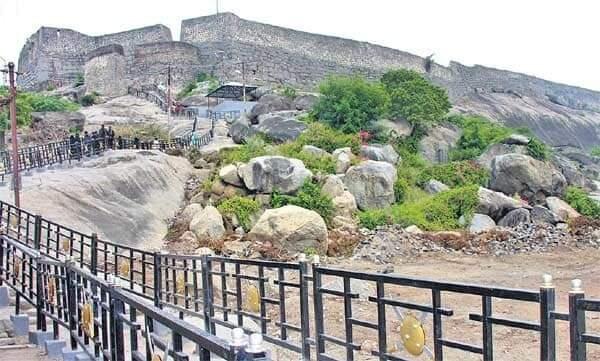 The captivating forts dotting different parts of the State always stand as a testimony to excellent craftsmanship and remain a proof of the glorious past. Khammam city is one such part, which is embellished with Khammam Fort in Telangana.

The fort holds historical significance not just for the Khammam city, but also for the entire State. Visiting this architectural gem should be on the must-see list of tourists when travelling throughout the State. According to history, the Khammam Fort was constructed in the 950s by the Kakatiya rulers. The kings Velama and Musunuri Nayak were also involved in its construction. Later in 1531, the Qutub Shahi kings developed the fort.

The fort stands as the pride of past glory. It is a blend of both bravery and various styles of architecture. The historical records about the fort reveal that the previous name was ‘Kambham mettu’ or ‘Stambhadri’.

Fort located in the heart of Khammam, is surrounded by a huge rock wall while there are steps from each bastion to enter into the fort. The number of balconies and windows are constructed along the wall to use the artillery during wartime. The fort has a capacity of mounting at least 60 cannons at a time.

ALSO READ:  How Technology Is Changing Healthcare System In India?

The fort has 10 gates and the main entrance is around 30-foot tall, which is known as Khilla darwaza. It has two cannons on either side of the entrance. The east gate or the secondary entrance is equally large and known as Raathi Darwaza.

A huge rainwater catchment system was constructed here. This massive tank is known as the Zafar well. There are small steps carved out of this hill to reach the top of the fort while small gates are all around the walls of it.

Fort has bastions constructed with two massive walls as a military strategy to counter the enemy from the top. There is also a belief that there are some secret tunnels to the Warangal Fort with multiple entrances in different locations at the fort.

How to reach: Khammam Fort is located within the heart of Khammam and is well-connected from Hyderabad both by road and rail. It is at a distance of around 200 km away from Hyderabad. There are many options for food with several restaurants being available in Khammam. Tourists can buy certain local handicrafts, figurines, toys for children and other small household articles made of wood here. There are many hotels which offer quality accommodation in Khammam.

Palair Lake: It is a part of Palair Village in Kusumanchi mandal of Khammam district. The lake, which is at a distance of 30 km from Khammam can be accessed by road. Though the lake is man-made, it is as beautiful as a natural lake.

The water from the Palair Lake is used for irrigation purposes, and it is a quiet, yet famous, spot for fish farming. It is a popular tourist attraction of Khammam as it provides both water sports as well as adventure activities.

ALSO READ:  'Lankavaram' - The 'Ooty Of Telangana' With Scenic Beauty And Nature's Feel

Sri Venkateshwara Swamy Temple: The shrine located in Jamalapuram, which is 79 from Khammam, is a famous temple in Khammam district. The presiding deity in this temple is Lord Balaji. The temple also boasts of sub-shrines for Padmavathi Ammavaru, Alamelu Ammavaru, Lord Shiva, Lord Ganesh, Lord Ayyappa, and Lord Anjaneya.

The temple’s location amidst pleasant weather surrounded by lush green hills is an added attraction. The temple is also called Khammam Chinna Tirupathi. As this ancient temple is located in a pleasant environment, it brims with tourists. The temple witnesses a heavy rush of pilgrims during auspicious occasions and festivals.

There are buses available from the district headquarters to Jamalapuram while there are few hotels located close to the temple which offer limited cuisine during the main darshan time. #KhabarLive