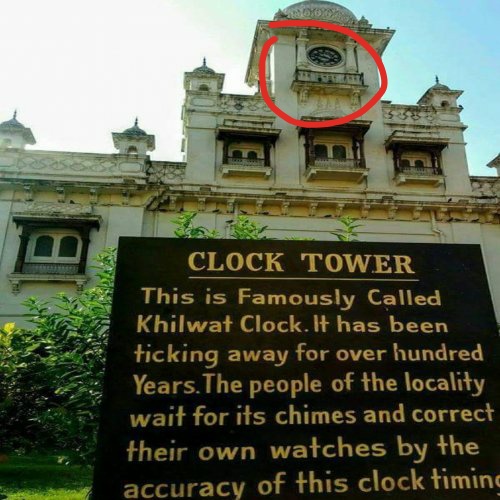 The Window of historic Chowmahalla Palace’s clock tower collapsed following recent heavy rains in Hyderabad. The dilapidated condition structure which was not in public domain was damaged, according to Palace authorities.

The clock tower served as the main gate to the splendid palace, the royal seat of the Asaf Jah dynasty (Nizams) from 1724 to 1948, a major tourism attraction in the city.

The debris fell on the busy Khilwat road but no one was injured, the police said. Officials responsible for maintenance of the palace said only a small part of the window had collapsed and there was no major damage to the structure.

While the palace was thrown open to the public after massive restoration works in 2000, the clock tower remained in dilapidated condition.

The palace authorities said they were planning to start the repair work in March but that could not be taken up due to lockdown.

Saturday’s incident also highlights the neglect of heritage structures in this historic city.

Last year, the iconic Charminar suffered damage when a portion of the stucco decoration work on one of its minarets collapsed.

Also known as Khilwat Palace, Chowmahalla was built between 1790 and 1869 during the reign of fifth Nizam, Afzal-ud-Daulah Mir Tahniyat Ali Khan.

A synthesis of Rajasthani, European, Persian and Indo-Saracenic architectural styles, it’s believed to have been modelled on the palace of the Shah of Iran in Tehran.

The Nizams entertained important guests and special visitors and organised ceremonial events at this palace. It’s a complex of four palaces and hence the name — Chowmahalla.

Princess Esra, wife of Prince Mukarram Jah, the titular 8th Nizam, took up the restoration of the palace in 2005 and the work was completed in 2010. It was not only opened for tourists, but also hosted important events, musical evenings and special dinners.