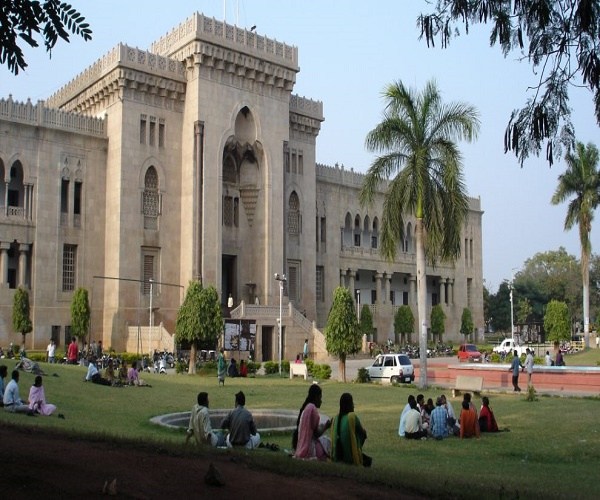 The Nizam-era structure has been a victim of apathy of the authorities towards its maintenance. Beyond the pink charm, there lies the red stains of pan masala, the dark brown and green of mold, and then, the stink of sewage. The interiors of the iconic Arts College in Osmania University are at their worst.

As one goes into the college building, impressed with the charm of the pink granite from outside, what meets the eye is an entirely different picture, one of neglect and utter disregard for heritage

The Arts College, also known as the University College of Arts and Social Sciences, has been a victim of the lackadaisical approach of authorities towards its maintenance, which is now taking a toll on the structure.

If seepage of water from the rooftop has put the structural ability of the building under a cloud, plastering on the roof and walls at several places is peeling off, crudely exposing the supporting iron beams. The windowpanes near the grand staircase are no more from where one would like to look at the beautiful campus.

The wall corners now have pan stains and mold nourished by a sewer leakage competing for space. The leakage has been around for years, with the authorities yet to trace it or seal it.

“The entire department stinks of sewage. Though it was raised with the authorities several times, they could not find out yet from where the sewer is leaking,” the head of a department in the college said.

The college’s decision to give a corporate look to its rooms too has apparently gone against the historic charm of the building. The traditional flooring — which used to keep the floor cool even in summer — has vanished in several departments and administration sections, with modern titles replacing them.

Some departments have put up false ceilings to give a swanky look to their rooms. In fact, one department has put iron chairs in place of teakwood benches meant for students, which used to lend an aura of old times and have been there for over eight decades.

Whitewashed walls and clean flooring can be seen only in the Main Hall, which is because of a recent facelift during the centenary celebrations of the university and also because it is cleaned on a daily basis.

However, beyond the principal’s office, not much focus is being laid on maintenance and cleaning. The chandeliers on the first floor have gone defunct, while the walls in many departments have been damaged after they went for the installation of air-conditioners.

Though dustbins are placed at several places, much of the litter, along with bird droppings and gutkha/pan masala stains, can be spotted in the corridors.

The Osmania University administration has now decided to give a facelift to the Arts College, which is nearly eight decades old. The project, expected to cost Rs 2.5 crore will include installation of one lift as well.

The administration has focused on sealing seepages on the roof on a priority basis. The lift is being planned for the physically challenged and will be near the Psychology Department or behind the college as there was no provision for going in for a ramp. The decision came with the University Grants Commission issuing guidelines asking universities to make barrier-free campuses for physically challenged students.

“The university will be spending Rs 2.5 crore to give a facelift to the Arts College. The works are being entrusted to the Central Public Works Department who with the help of heritage experts will be taking up repairs. Main priority will be sealing the roof and later a lift for the physically challenged,” Prof S Ramachandram, Vice-Chancellor, OU, told #KhabarLive.

Heritage experts have blamed the authorities for the sad state of affairs in the Arts College.

On the planned lift facility for the college, she said, it should be established without disturbing the building’s structure. #KhabarLive