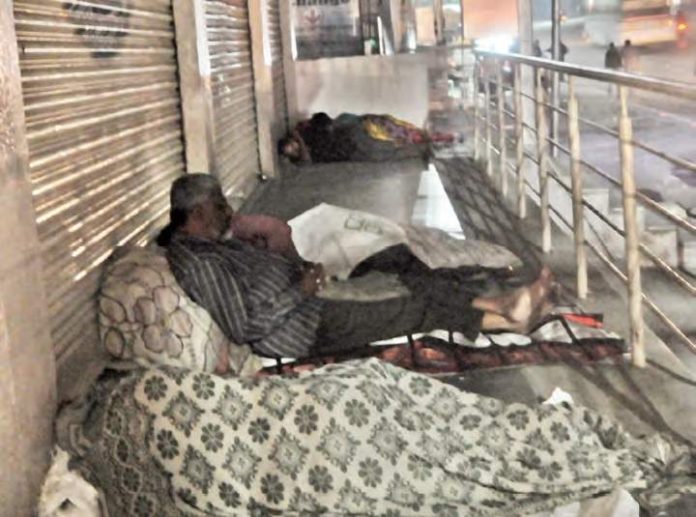 Every night, about 50 people sleep on pavements on MG Road; similar situation prevails at Rathifile bus stop as well. While there are 12 shelter homes around the city, the needy hardly know about them or use them. Full benefit of these shelters are enjoyed by job seekers arriving from neighbouring districts of junior film artists.

Ragpicker Srinivas says he does not go to the shelters as people there ‘despise’ him. “I am not always clean and I carry along with me a giant polythene bag filled with plastic bottles. People despise me,” says the 18-year-old clad in jeans, shirt and sporting a cap. Srinivas is now used to sleeping in open in winters.
A DAY-NULM shelter home, managed by GHMC near Lingampally railway station, has a strength of 17 beds but a look at the daily entry shows there are hardly seven or eight persons who stay in the home. Most of them work at a nearby labour adda.

The situation is different at the homes in Yousufguda and Begumpet. They have more job-seekers and junior film artists as inmates. “Many do not know that a shelter home exists there until they come inside the compound of the ward office,” said Srinivas, a home’s caretaker. Less than 100 metres from there, an encampment of 20 shacks have been built by settlers from Anantapur district of Andhra Pradesh. “I do not know of any shelter home located here.

I remember living in one near Ranigunj in 2010 but it is not there now,” said G Rajendra, a native of Shadnagar. The ragpicker takes shelter at the Mehdipatnam bus stop. A majority of the shelter homes in the city were set up under Section 10.5 of the Scheme for Shelter for Urban Homeless. Ironically, they are meant to accommodate those without proof of address or birth.

Mohammad Tarique, member of the special committee to examine national model beggary legislation and director of Koshish that works for destitutes in Mumbai, observes that the already deprived population of the country are further made to suffer by mandating ID cards. “Many homeless people do not have any ID card and shelter homes are for those who do not have ID cards. In fact, they are to be helped to get one. If thefts or security is a concern, I wonder how an Aadhaar can prevent it?” he wondered.

Meanwhile, Aadhaar is mandatory with the Municipal Corporation of Jalandhar in Punjab as well. “Security cannot be compromised and we cannot take chances. We want to know who is really entering our shelter homes,” said Chaman Lal, corporate engineer, MCJ. The same mandate is leaving several homeless on the streets in the freezing cold even in Vijayawada in Andhra Pradesh. However, an official of the Delhi Urban Shelter Improvement Board said policing is of lesser priority than giving shelter. The norms by GHMC are in contrast to the 2013 operational guidelines laid down in the scheme of Shelter for Urban Homeless (SUH), DAY-NULM.

What the guidelines say:
– For every one lakh population, there needs to be one permanent shelter home..

– 67 shelter homes should be maintained by GHMC as the city has a population of 67 lakh people as per the Samagra Kutumba Survey, 2014.

– 12 shelter homes are present in the city, of which 4 are for women. There is none for families.

– GHMC built shelter homes for patients’ attendants at four government hospitals which are yet to be opened. #KhabarLive