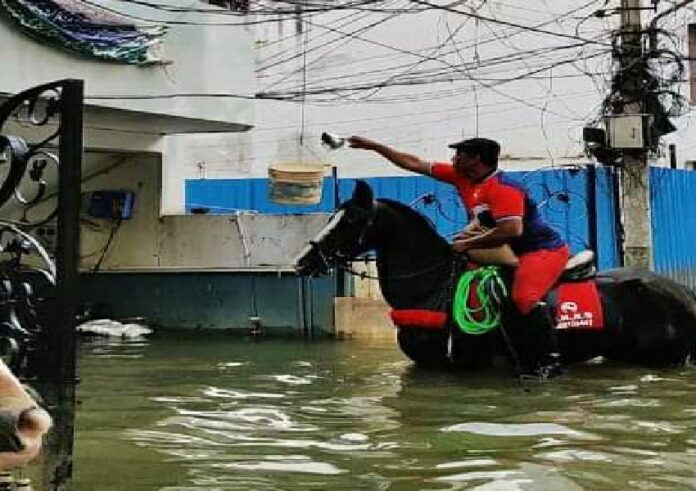 A real hero of modern days crisis with a heart of gold – Mohd Abdul Wahab and his team from the Hyderabad Horse Riding School headed out on horses to help those stranded in Toli Chowki floods in Nadeem Colony and adjoining areas.

Around 6 pm on October 13, incessant rains began to lash the city of Hyderabad. Until early the next morning, the rains refused to subside, resulting in water logging and inundation in several areas in the city. Nadeem Colony in Toli Chowki was one of the worst-affected areas. When Mohd Abdul Wahab, the President and chief trainer of the Hyderabad Horse Riding School heard about the damage, he realized that he could be of great help to the affected people. Immediately, he gathered a team of instructors and students and bought basic and essential goods. With these in tow, the team galloped on four horses to help those affected by the floods.

“Horses can effortlessly move around in water. We train our horses in a big pond in the academy. In North India horses are used to even cross rivers. I was confident that my horses would be of great help in this time of distress. Once upon a time horses were used in wars, they’re strong agile. Even the Quran mentions about the valour of horses”, said Abdul Wahab, while speaking to #KhabarLive.

The team moved around affected areas, reaching those who were stranded. There were several people stuck on the first and second floors of their homes. While the team rescued some people, essential items were handed to the others who chose to stay. “We handed out candles, mosquito coils, packed milk, biscuits, water and other essentials. The candles were necessary as power lines had been snapped and several colonies were thrown into pitch darkness”, recollects Abdul.

On the next day, when they realized it would take several more days for things to settle down, the team called for a cook and packed meals for those who were stranded. Six more horsemen joined them. The horses helped reach interior narrow lanes, where it was impossible to go without the help of boats. “There was an acute shortage of boats. The state government had to reach out to other states for boats. We were glad we could be of some help during the crisis situation”, said Abdul.

The academy has around 40 horses, out of which around 10 were taken for rescue and relief work. Each horse costs around Rs 5-8 lakh and belongs to the Marwari breed, an Indian breed from the Marwar region of Rajasthan.

When #KhabarLive asked Abdul if he was worried about his expensive horses when he first decided to take their help for rescue efforts. In response, he stated an example to explain what he felt at that moment. He said, “If there is an emergency situation wherein you have to choose between your stranded mother and your Lamborghini car filled with money, any person would only choose to rescue his mother. We were in such a situation and we decided to go ahead with the efforts.” The team continued with their efforts for around five days. Abdul spent around Rs 30,000 to 40,000 per day on the resources used for the flood relief.

As it was difficult and time-consuming to ride back to the academy to refill supplies, the team chose SA Colony, which is close to the affected areas, to set up a makeshift centre to store all the supplies. This helped them to quickly refill the essentials and head out again whenever they ran out. The team helped people in Nadeem Colony, Nirja Colony, Virasat Nagar, Balreddy Nagar Chabbra Colony and several such inundated areas in Toli Chowki.

During the Kerala floods, we saw the Jeep Owners Association voluntarily bringing out their powerful vehicles and heading to inundated areas for relief work. Similarly, in Toli Chowki’s narrow by lanes, the horsemen and their horses turned out to be heroes, as they effortlessly trotted around in deep waters to ensure thousands of stranded people had access to food and essentials. #KhabarLive #hydnews