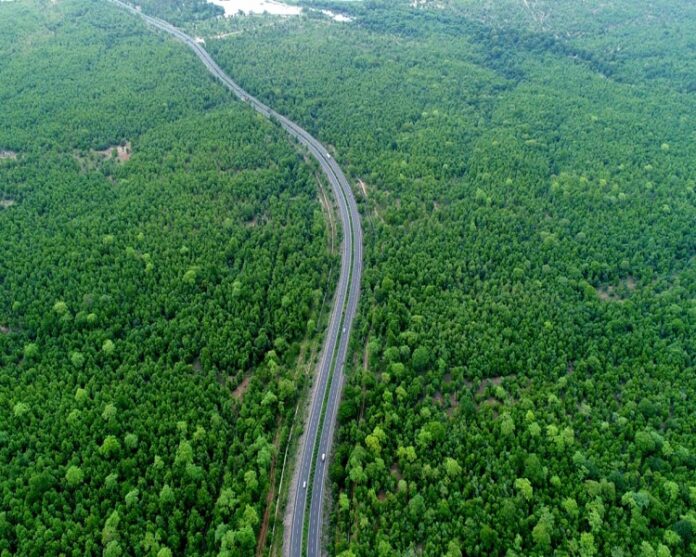 The Telangana government illegally constructed many roads in protected forests. The areas where roads were constructed without approval include the Kawal Tiger Reserve, spread across parts of erstwhile Adilabad district in Telangana.

The Telangana government has drawn flak for allegedly violating forest conservation laws by taking up road construction works in at least three reserve forest areas in the state. The road construction activities were taken up by the state government under the Pradhan Mantri Gram Sadak Yojana (PMGSY). The issue came up for discussion at the 49th meeting of the Regional Empowered Committee (REC) under the Union Ministry of Environment, Forest & Climate Change (MoEF&CC). According to the minutes of the meeting, of the 24 proposed road development projects, nine have been completed in reserve forests without obtaining permissions.

This means that the Telangana government allegedly failed to obtain the requisite permission before going ahead with construction and also violated the forest conservation and wildlife protection laws in place.The online REC meeting, which was attended by around nine members including the Chairman and special invitees on August 17, said that out of the nine projects, four fell under the jurisdiction of the Kawal Tiger Reserve, while three fell under the Kinnerasani Wildlife Sanctuary and two under the Pakhal Wildlife Sanctuary.

The Kawal Tiger Reserve is spread across parts of erstwhile Adilabad district and hosts a wide range of wildlife, besides tigers. The Kinnerasani Wildlife Sanctuary is situated in Bhadradri Kothagudem district while the Pakhal Wildlife Sanctuary is located in Warangal Rural district. The Kawal Tiger Reserve has significantly contributed to the steady rise in the tiger population in the state in recent years.

The REC termed the partial and full completion of these nine projects as “very serious” and directed the state Principal Chief Conservator of Forests to ensure that no other work be carried out, till an approval from the competent authority is obtained.

“After deliberation on each proposal, the committee noted that most of the road stretches have already been completed partially or fully by the User Agencies without prior approval of the competent authority, in violation of Forest Conservation Act, 1980. The committee considered such works in violation very seriously and directed the PCCF, Telangana to ensure no works will be carried out further till the approval from the competent authority is obtained,” the minutes of the meeting stated.

The REC also said that such an action could warrant action, including a penalty. It has directed the Integrated Regional Office of the MoEF&CC in Hyderabad to write to the MoEF&CC’s central office in New Delhi, for further orders on how to proceed with the issue of violations.

The committee further said that as a large number of road proposals are falling in the above wildlife habitats, a comprehensive plan needs to be prepared by experts that can be implemented in a phased manner for betterment of wildlife and to avoid man-animal conflict.

The committee also asked the MoEF&CC office in Hyderabad to issue a letter to the state government, to direct its field officials to ensure that no work in violation of the Forest Conservation Act shall be undertaken. The committee decided to conduct a physical inspection of the site ahead of the next REC meeting. The REC also said that the state government shall submit a complete list of proposals under PMGSY, which fall in areas with wildlife. #KhabarLive #hydnews