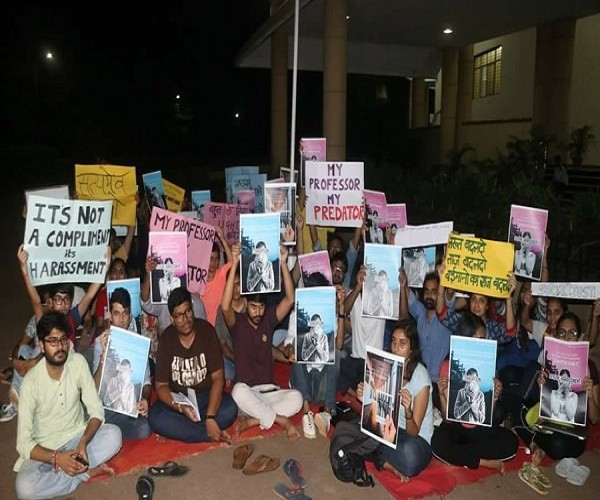 In Chattrisgarh’s Naya Raipur based Hidayatullah National Law University students say the vice-chancellor refused to take any action on their complaint and that they doubt an ICC investigation will be fair. In March this year, a faculty member allegedly called a second-year student of Hidayatullah National Law University to his desk during a class and asked her to dance for him. “I have seen you dancing at parties. Why don’t you dance for me here?” the man told the 19-year-old girl.

The student told #KhabarLive that even as the classroom was stunned into silence, the man kept badgering her.

“You can dance in public places, you can’t dance for me?” he is reported to have told her. Shocked, the girl managed to mutter that she was uncomfortable and hurried back to her seat as his booming laughter drowned the silence in the room.

The student of the law school in Raipur, Chhattisgarh, had been uncomfortable around the professor since the beginning of the year. She had been routinely mocked for her accent and had to field juvenile comments on her place of origin.

That apart, the professor often called her to his room and revealed details about her whereabouts which convinced the girl that he has been stalking her. “He’d say things like ‘you were at Ghari Chowk with your parents on 29 June, buying a stand’. Or ‘you went to the mall with a senior’. I was terrified,” she told #KhabarLive.

Get the best stories of women challenging the status quo around the world in your inbox each week. Newsletters may offer personalized content or advertisements. Learn more

“He’d say things like ‘you were at Ghari Chowk with your parents on 29 June, buying a stand’. Or ‘you went to the mall with a senior’. I was terrified.”

When she confided in a female faculty member, the latter allegedly said students must get used to him. Another woman, a hostel warden, told the girl that since the man was from an orthodox background, he usually said and did things like these. Both women asked her to not get too worked up.

In the months following the incident, several women classmates started sharing with her stories of harassment they faced from the same professor. “He told one girl, ‘only wear formals to college, I like looking at you this way’. He asked someone else what shampoo she used and insisted she wash her hair with it every day. Then he would promise to give extra attendance for students who would do him favours,” the student told #KhabarLive.

On 7 August this year, the woman, with help from her classmates, wrote an elaborate memorandum where twelve instances of harassment were detailed. The petition was signed with support messages by 51 of the 54 students in the class. Six women from the class went on record with their names in the document. The students said that they then went to vice-chancellor Sukhpal Singh to submit the petition.

But when they turned up at the VC’s office with their complaint, the student told #KhabarLive, they were reprimanded instead. “He actually started shouting at me over the language of the draft. At one place, I had written ‘your university’. He kept yelling why it says ‘your university’,” the student said.

“Why haven’t you written ‘our’ university? Isn’t it your university too?” Singh is said to have told the students.

The next day, much to the students’ shock, the teacher was back in class. This time, he threatened that his ‘curse won’t leave’ any of them. The professor also told the students that the VC had told him that “some students have complained against you, take care of it”.

The stir against one professor revealed that two others had also been harassing senior students for months. “The harassment includes sexist remarks in class like ‘girls come to class so that boys attend classes too’, ‘if you stare at a girl for 30 seconds it’s sexual harassment, so stare for 29 seconds’, ‘women directors are appointed so that the men can be entertained’, etc. Others have texted female students asking them to come to trips with them as a favour,” Dixit told #KhabarLive.

Meanwhile, the Chhattisgarh High Court directed Singh to step down, following a petition filed by a faculty member protesting the extension of his term. So the VC left his post on 27 August.

“Other (professors) have texted female students asking them to come to trips with them as a favour.

“We were slightly relieved. There was no ICC (Internal Complaints Committee) till a year back and one was constituted without the mandatory member from an NGO,” the complainant told #KhabarLive.

“The VC should have ideally forwarded them to the ICC, but because of his callous response, the complaint never reached the ICC at all,” Dixit told #KhabarLive.

The students have been holding relentless protests in the campus for weeks now.

The complainants had began compiling a formal complaint to be lodged against the professor at the ICC, when the Supreme Court recently reinstated Singh as the VC. On 25 September, the students submitted a ‘no confidence’ letter against the VC to the Chancellor. Dixit claims it has been signed by 800 people. The letter mentions the VC’s alleged lack of transparency in financial dealings, arbitrary hostel and library timings, and mishandling of cases of sexual harassment as the reasons why students want him removed.

VC Singh told #KhabarLive that the “genuine issues” students raised had already been addressed, but refused to specify which ones. On the harassment case, he said, that “the committee will look into this, if anyone is found guilty, he will face action”. On being reminded that the students have refused to move the ICC because he mishandled the situation last time, Singh told #KhabarLive, “There has been some delay but that doesn’t mean no action will be taken. It is not like I did not want to do anything. I was travelling because a near and dear one had fallen sick, so delay happened.”

Dixit informed HuffPost that at a recent meeting with students, Singh had said that action against the professor will be taken if he repeats what he has done. The complainant told #KhabarLive that a letter has been emailed to the ICC with relevant documents for their perusal, but the ICC asked the women to lodge a formal complaint with dates and witness accounts.

“I have compiled everything, but I am not going to make an official complaint considering the VC, who endangered my prospects by not taking action, is back,” she said.

The student demands that the college should give in writing that the process of investigation will be completely fair and students can file the complaint anonymously. “And whatever the results of the investigation, considering I doubt it will be fair, the man should be barred from teaching our batch. We are sure he’d like to take out his anger on us,” the woman told #KhabarLive. #KhabarLive