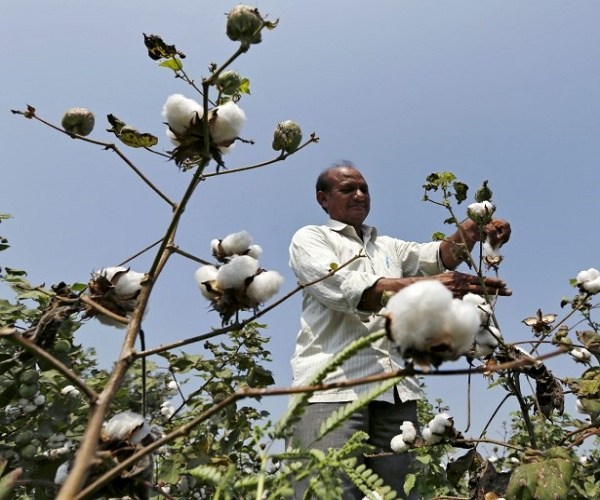 As scenario visible in Idyllic villages, lush crops swaying gently in the breeze, people contentedly going about their daily chores – this scene has been a staple of many Indian films but it is barely real. For farmers in Telangana growing genetically engineered cotton in particular, this could not be farther from their actual lives.

Experts say that “cotton farming villages in India are being rapidly transformed into ‘socially toxic’ landscapes that intertwine and interdigitate with cotton farmers’ distress.”

Genetic engineering is a method of changing the genetic makeup of an organism so that it acquires traits that didn’t naturally acquire. In plants, this may mean making them resistant to pests, improving their drought resilience or enhancing their nutritional value. The two most prominent advantages of cultivating genetically modified (GM) plants are increased crop yield and reduced use of fertilisers and pesticides. However, its detractors focus their attention on the high cost of seeds, loss of biodiversity and restrictive rights that prevent farmers from saving seeds for the future.

In fact, GM crops have been controversial around the world, with countries taking different strands based on technological, social, cultural and economic considerations. While scientists have been able to establish GM crops are safe to use, they aren’t cultivated as much mostly due to regulatory failures. Several developing countries in South Asia, South America and Africa have continuously increased the cultivation area of GM crops.

India itself has thus far approved only one GM crop for commercial cultivation: Bt cotton. This is an engineered variety resistant to bollworms, a common cotton pest; it was created by modifying the cotton plant’s genome to include a gene that produces toxins harmful to the pests.

Since Bt cotton was introduced in India in 2002, most cotton farmers in the country switched to it. Compared to conventional cotton, Bt cotton uses fewer pesticides but requires more fertilisers. The Bt cotton crop also requires a higher amount of water during the fruiting phase, for which farmers prefer to rely on irrigation instead of rainwater, and soil that can retain moisture well.

In Andhra Pradesh – including the area demarcated later as Telangana – farmers switched rapidly to Bt cotton; within a decade, the state became the biggest cotton cultivator in South India. However, the excessive use of fertilisers and pesticides had depleted the soil, while farmers continued to use them in copious amounts out of habit. Add to this the cost of agrochemicals and droughts, and neither the cotton yield nor their returns on investment improved as a result. In the end, farmers, and their families, who had switched to Bt cotton were left staring at more mental and physical suffering.

In the new study, researchers tried to make sense of this tragedy through conversations with farmers, the women and mental health practitioners. Specifically, although the researchers were aware of the consequences of chemical overuse and its effects on the soil, they spoke to the farmers and their families to understand how they interpreted it.

In all, they were able to speak to eight farmers, who visited a local seed and pesticide dealer, in Telugu with the help of translator. Their conversations happened in an open space near the shop in the early afternoons, after the farmers had finished their work, and went on for about two hours each. The researchers also spoke to eight women in the courtyard of their homes in the early mornings, after they had finished their work, for about an hour each.

Andrew Paul Gutierrez, an emeritus professor at the University of California, Berkeley, who has extensively studied cotton production in India, said, “The sample size in their study was small but the insights provided by the interviewees was very good, reflecting how the poor are really at the mercy of those that control the information as to the nature of the problem, sell the ‘solution’ and set the price of the cure.”

The researchers found that although the farmers were aware of the consequences of excessive chemical use, impact on health and the local environment, they had been forced to grow cotton because that fetched better returns, and they prioritised returns over safety. According to one, “The buyers are more keen to see how the produce looks.” If their appearance doesn’t meet expectations, they can’t sell it. “Therefore we are more concerned about the look of the product than the chemicals.”

Overall, in fact, there seems to be a mismatch between what administrators and policymakers optimise and what farmers on the ground care about. As a result, with cotton at least, many farmers are not sure about which seeds to use, how to strike the balance between appearance of the produce and the amount of chemicals to use, and even where to seek help should they fall sick in the process. Most of them have made up for the information deficit, though not entirely, through informal social networks with other farmers and dealers in the same region. So, a cotton farming village from being happy and sufficient has turned into one with suffering and distress, for both the people and the environment, or a ‘toxic’ landscape.

Additionally, among other things, the women were concerned that since all farmers now grew only cotton, they had to buy vegetables, grains and other foods instead of having them grown and distributed locally.

Ultimately, the authors argue that interconnected factors at the local, national and international levels are responsible for creating a ‘toxic’ environment – one that agriculturists and public health personnel have thus far struggled to make sense of before they can devise policies to alleviate suffering.

For one, even though Bt cotton is technically safe, Telangana may not be the right place to cultivate it. If it is going to be cultivated there, then the state and central governments need to ensure the state is first equipped with more doctors and psychologists who can treat agrochemicals-related afflictions, and so forth. Without these measures, simply distributing Bt cotton seeds because they have higher pesticide-resistance and yield isn’t going to fix anything.

“What results is a dystopic situation that, unless the information and appropriate technology reaching the poor farmers is accurate and caters to their needs, improves their lives and corrects the imbalances agro-technical inputs cause to the ecology of the system, the situation will only worsen,” Gutierrez said. This leads to causes farmers to go bankrupt, abandon their land or sell them to larger land-holders, and move to cities that are “overwhelmed with excess unskilled labour”.

However, Mohan Komarlingam, a former scientist at Monsanto who has worked on genetically modified crops including Bt cotton, doesn’t agree with the authors’ analysis.

He said there is no doubt that Bt cotton protects crops from pests, thus reducing pesticide and fertiliser use, and that the liberal use of agrochemicals has degraded the soil and contaminated groundwater.

However, he focused on farmers not having a choice. “They are pushed into the treadmill and are forced to provide these inputs to get some remunerative price for the produce and thus earn a livelihood,” he said. “The abuse of resources invariably leads to evolution of resistance in insects/disease-causing pathogens to pesticides and extermination of soil fauna and other beneficial insects – [all] integral parts of the crop ecosystem.”

Additionally, Bt cotton improves yield on well-managed lands, not on the dry and poor lands of Telangana. The “farmers should have been advised to grow local varieties on marginal lands rather than go for input-intensive Bt cotton hybrids and suffer losses.”

This again points to the interconnectedness of various factors leading to a distressing situation. The authors suggest a collaboration between cotton farmers, agriculturists, social scientists and health professionals. Komarlingam proposes building an army of crop consultants – trained graduates with practical experience to advise farmers for a nominal fee. However, all this can only happen if policymakers appreciate the variety of factors leading to such situations and put in place a viable agricultural strategy. #KhabarLive