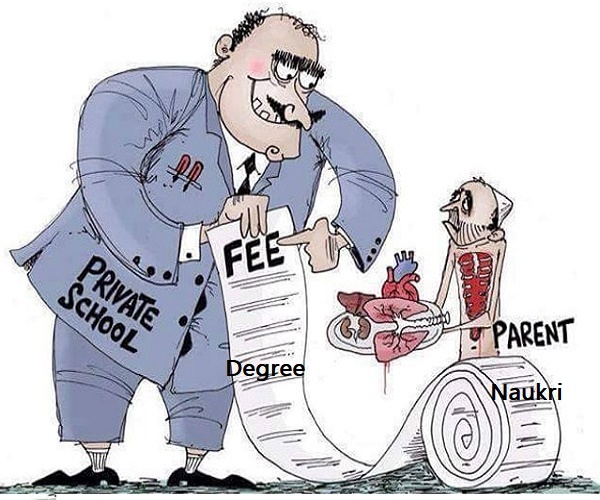 It would be an understatement to say that India’s education sector is in a bad shape. From darkness to light. Or so I thought when I heard about my shifting from the dark dungeons of coal mines, as coal secretary, to the bright lights of school education, as secretary for school education and literacy.

However, I discovered soon that in the coal sector, mining was underground and mafias operated above it, but in the minefield of school education, it was the other way round. All the education mafias existed underground, and they were all masked, masquerading as so-called noble giants. Having taken on some of the mafias of the coal sector and partly succeeded in bringing the sector to order, the task was now to handle these ‘noble giants’. It was made more difficult as there was no public outrage against invisible scams in education as was in the case of coal.

Everything seemed to be apparently in order.

To make matters worse, I was the fifth person to hold the charge of secretary in the education department in just two and a half years. Most of my predecessors with impeccable credentials in the education sector did not continue or were not allowed to continue. The government apparently found in me to be the most ‘educated’ person (I had never worked in this sector except for a brief tenure of three months in 1997 in adult education in Uttar Pradesh) to handle this sector.

It would be an understatement to state that the education sector was in bad shape – both in terms of budgetary allocation and human resource management.

On the human resource front too, the situation was alarming. The department had five secretaries between 2014 and 2016. A number of joint secretaries were also changed during this period. It was like musical chairs reminiscent of my days in UP where it was rumoured that the only industry flourishing was the transfer industry.

In the two biggest states of the country, the positioning of top management followed a peculiar pattern. Whereas in UP, there were two additional chief secretary-level officers manning school education and secondary education separately (creating huge coordination problems), in the state of Bihar, one officer looked after both the education and health departments. Consequently, the health of education continues to suffer.

In addition to this, the mafias were having a field day, eating into the system, like termites. Fortunately, like all mafias, those in the education sector too were not a majority, but played a dominant role in decision-making. They were extremely well connected and deeply entrenched. There were a host of mafias, but the prominent ones were operating in these areas:

There are around 16,000 B.Ed and D.El.Ed colleges in the country. A large number of these exist only in name. If you pay them well, you can get a degree without an effort. It was rumoured that if you pay them more, they could even arrange for a ‘naukri’ (a government job). Action was initiated by then chairman of National Council for Teacher Education (NCTE) Santosh Mathews, an upright officer, by issuing notices to all the colleges to furnish the details of their existence on affidavits.

The idea was to ensure that only those that actually existed got recognition and in case of wrong information they could be prosecuted. It worked initially, but the colleges realised that quite a few of them could be in trouble. Despite the support he got from most of the states, he was put under enormous pressure by the mafias who took the ‘judicial’ route to pin down the chairman. He had to quit.

In a few northern states of the country, a number of examination centres are given on ‘theka’ (contract) for copying. These centres are highly ‘priced’ as they facilitate mass copying or cheating during examinations. The current chief minister of UP, Yogi Adityanath, came down heavily on this mafia.

This was last done by Kalyan Singh in 1991, but thereafter no chief minister could dare to do that. Consequent to the steps taken in UP in this year’s exams, more than one million students chose not to give exams. It is a reflection of the ‘addiction’ to mass copying.

The publishing industry thrives on the education sector. People with vested interests want to maintain status quo as this benefits them. It happens at two levels. As respective state governments provide free books to students, there are various ways in which money is made. The ‘mandatory cuts’ in getting the books printed centrally constitutes a substantial portion.

The initiative taken by the UP government in 2018 and the consequent savings thereunder lends credence to this allegation. The Bihar government is toying with the idea of direct benefit transfers recognising the ‘dealings’ inherent in central printing and distribution.

The other level of money making is done by a handful of private publishers who enter into an ‘arrangement’ with the private schools in the name of quality, and compel the students to buy almost four to five times more expensive books as compared to the NCERT ones.

If all the students of around 20,000 CBSE-affiliated schools were to source NCERT books, there would be an estimated annual expenditure of around Rs 650 crores. Compared to this, if they source books from private publishers, it would cost around Rs 3,000 crores per annum. The difference is too great to justify the quality argument.

The NCERT did a wonderful job in the current academic year to ensure that books were available on time so that the students were not compelled to buy expensive books, but this effort will need to continue. The NCERT will always be under pressure from people with vested interests to be ‘inefficient’.

Most of the private schools in India contribute enormously to imparting quality education. However, some of them are bringing a bad name to this segment. There are some extremely powerful individuals who are able to get away with the most immoral things in education. They violate various norms, legal and ethical, with impunity because having been part of the official machinery at some point in time they know the tricks of the trade.

Irrational hiking of fee, charging huge sums of money to ‘lend’ their brand, harassing the brand assignees are some of the many tricks they practice. The chairperson of the CBSE Rajesh Chatur who chose to take them on was shown the door in 2017. His successor, Anita Karwal, one of the finest civil servants, was also set to be ‘sacrificed’. But she held her ground despite pressure.

The good news in all of this is yet again from UP where the state has enacted a law on the fee regulation after consulting all the stakeholders. Hence, the legislation has been welcomed by all. Hopefully, other states will follow suit. #KhabarLive