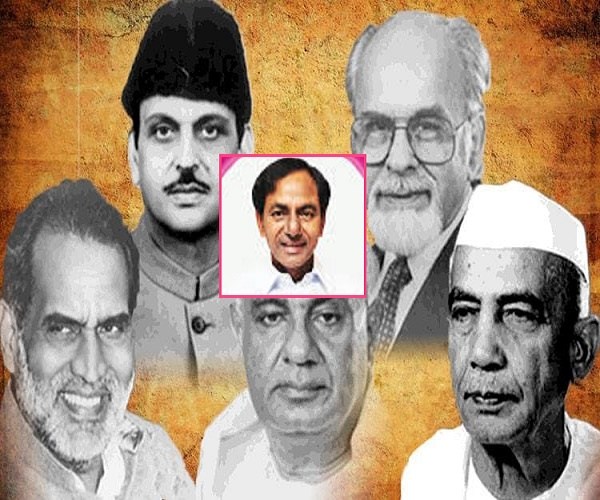 Over the past few weeks, Telangana Chief Minister and TRS leader K Chandrasekhar Rao has been holding a series of meetings with heads of regional parties in India to forge a Federal Front – a non-BJP, non-Congress alliance – to go up against the two main national parties.

There have been only five instances in India’s Independent history where a non-BJP, non-Congress leader has become the Prime Minister of India but their governments have not lasted for more than two years. Four of them had the support of the Congress while one was supported by the BJP.

1979: Choudhary Charan Singh of Janata Party (Secular)
In the 1977 General Elections after the Emergency, a fragmented opposition hastily came together under the Janata Party banner to oppose the Indian National Congress, which was led by Indira Gandhi. Janata Party won the elections riding on an anti-Congress wave after the Emergency and Morarji Desai became the first non-Congress Prime Minister of the country. However, two years later, the opposition began to witness internal rifts and withdrew support to Desai, who resigned as Prime Minister. Charan Singh of the Lok Dal, who had the support of freedom fighter Raj Narain, who had defeated Indira Gandhi in the elections from Rae Bareli, succeeded Desai as the Prime Minister in 1979 with support from the Congress party. He, however, was forced to resign in 1980 after Indira Gandhi withdrew her support to the government.

1989: Vishwanath Pratap Singh of Janata Dal (National Front)
Congress leader Vishwanath Pratap Singh had been sacked from the Rajiv Gandhi Cabinet in 1987 for being critical and speaking against the government. He then founded the Janata Dal – comprising Jan Morcha, Janata Party, Lok Dal and Congress (Socialist) – and was made its President. Ahead of the 1989 Lok Sabha Elections, the Bofors scandal rocked the Rajiv Gandhi government. Riding on this wave, VP Singh united the opposition parties – the TDP, the DMK, and the Asom Gana Parishad to form an alliance for the elections. The National Front received outside support from the BJP as well as the CPI(M) and defeated the Congress led by Rajiv Gandhi. VP Singh became the Prime Minister on December 2, 1989. However, Singh had to resign on November 10, 1990, after the BJP, which was actively pushing for the construction of the Ram temple in Ayodhya, withdrew support to the government. VP Singh faced a no-confidence motion and lost.

1996: HD Deve Gowda, Janata Dal (United Front)
Ahead of the 1996 elections, a Third Front to take on the BJP and the Congress was formed, comprising of regional parties across India. The results delivered a hung Parliament and Atal Bihar Vajpayee of the BJP, which had emerged as the largest party, was invited to form the government but he was given two weeks to prove his majority. BJP’s Atal Bihari Vajpayee, who took oath as Prime Minister on May 15, 1996, conceded that he could not get a complete majority and resigned on May 31. Congress, the second largest party did not choose to form the government but instead decided to support the Third Front and HD Deve Gowda was chosen as the Prime Minister. Deve Gowda was sworn in on June 1, 1996. However, the Third Front was in an uneasy alliance – the Congress, which had extended support to the government, was not happy with a passive role in administrative decisions. Deve Gowda had to resign in April 1997 and the Third Front chose Inder Kumar Gujral to become the Prime Minister.

1997: Inder Kumar Gujral, Janata Dal (United Front)
Inder Kumar Gujral emerged as the consensus candidate following differences developed among United Front leaders including Lalu Prasad Yadav, Mulayam Singh and others as to who will become the Prime Minister. Gujral was sworn in as the Prime Minister of India on April 21, 1997; this time too, he had outside support from the Congress. However, the Jain Commission probing the assassination of former PM Rajiv Gandhi accused the DMK led by M Karunanidhi of giving the LTTE a ‘free run’ in Tamil Nadu. Calls grew for action against the DMK but Gujral was apprehensive about taking action against the party, fearing it would withdraw from the government. However, Congress withdrew its support to the government in protest on November 28, eight days after the Jain Commission was made public.

ALSO READ:  Is 'Telangana' Trapped In The Game Of 'Urdu' Politics?

2019: A fresh attempt for a third front
In the past two weeks, just weeks before results to the 2019 General Assembly Elections are to be announced, KCR has held talks with Pinarayi Vijayan, DMK Working President MK Stalin, JDS supremo HD Deve Gowda and Karnataka CM HD Kumaraswamy and YSRCP’s Jagan Mohan Reddy. This is the second round of talks with opposition leaders – last year he met West Bengal CM Mamata Banerjee (chief of the Trinamool Congress) and Odisha CM Naveen Patnaik (chief of the BJD). He has also reached out to Samajwadi Party’s Akhilesh Yadav.

History shows that none of the past non-BJP and non-Congress governments at the Centre held power for more than two years. Each of them had support from either the Congress or the BJP and lost power the moment that support was withdrawn. That is perhaps why K Chandrasekhar Rao, who seems to nurture Prime Ministerial ambitions, has kept his options open. #KhabarLive