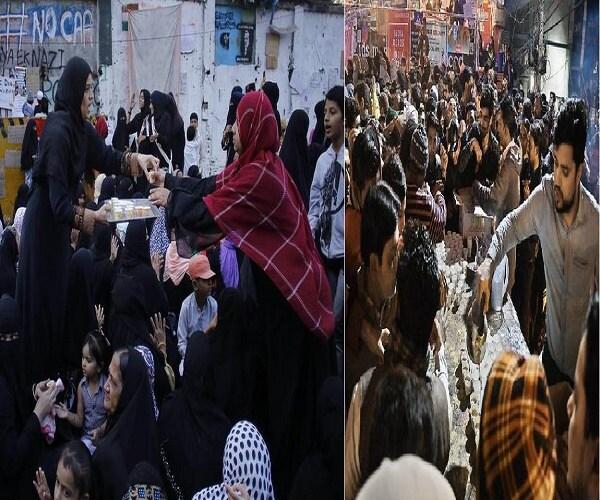 The smell of freshly brewed tea is in the air at protesting area. An old man pushes a cart of guavas past us. “₹10 a kilo,” he announces. Surprised by the low price, we buy a batch and pay him a little more. He shakes his head and returns the excess cash — this isn’t all about business. This is about solidarity. Unity is the overriding sentiment here, solidified through shared meals of idly, wada, dosa, omelettes, biryani, puri-sabzi and tea.

For nearly months, the women have been sitting inside a tent at one end in protest against the Citizenship Amendment Act (CAA) and National Register of Citizens (NRC).

The protesters — men, women and children — occupy most of the min roads, their numbers extending up to 5,000 or more on certain days. Feeding this mighty crowd is not an easy task, but this community-led agitation has organised itself for the purpose.

“Every day, we have well-wishers coming up to the stage, and asking us what the situation is like for tonight’s dinner, or tomorrow’s lunch, and then we tell them how many plates we need, and how many have been arranged so far,” says Hamed Ahmed, a dedicated volunteer. People from the area arrange these meals, either preparing small batches in their households, or mostly, coordinating with restaurants.

Some women are fasting as a way of protest, and they break their fast in the evening with khajoor, cool water, samosas and chai. Mealtimes are hectic for the volunteers, they move in and out of the tent, making sure everyone has had something to eat. Outside, men line up to receive plates of puri and idly or biryani.

“One person can’t feed everyone here, so we have mixed items — some get biryani, some pulao. Our Sikh brothers have also set up a langar here,” says Shaheen Sultana, another volunteer.

“All of us take up different responsibilities, but it’s not like one person will permanently be doing one job. If I get tired, somebody else will take over,” says Shaheen.

There is an unofficial ‘kitchen department’ to arrange for the food, “but if there are packets of biscuits or such smaller items, whoever is around will distribute them.”

The self-sustaining, grassroots nature of the protests caught the nation’s imagination, and when people from other states come here, they often bring food. So much so that on stage, a volunteer has to explain to the protesters, “If you want to get food, please inform us first so that we can arrange for its distribution!”

It is 6 p.m. the women hold up placards, even as other protesters finish evening namaaz (prayers). Though a younger and smaller protest this, too, is dependent on the kindness and solidarity of strangers.

“There are small-business owners who donate some food items and water bottles for the protesters, who have been sitting here for more than nine days. We don’t have any funding from any organisation,” says Sayeed Sultan, a volunteer.

These include businessmen like Aarif Khan, who are unable to participate in the protest, and hence do their bit by donating sandwiches, fruitcake, samosas and water bottles in bulk. “Most of the people who donate food to the protesters do not wish to be named,” says Sultan.

Another homemaker brought 25 packets of biscuits for the protesters. “I have three children who go to a primary school and my husband works as an auto rickshaw driver. It is difficult for me to manage household chores, but keeping this alive is very important,” she says on condition of anonymity. She adds that her children accompany her here post-school, and she helps them with their homework there.

Numbers swell to about 5,000 between noon and 10 p.m. each day. At least 150-odd protesters stay the night, dividing themselves in batches so that the women can take turns staying at home with their families.

The people who want to make the time to be there but cannot, get hold of bawarchis to cook fresh food like puri-chole in bulk for those sitting in. This is usually done by about eight to 10 neighbourhood households joining hands — and funds — at a time, says social worker Sumaiya Begum.

“It is not just homemakers and families who help. On most nights, some hotels and restaurants nearby [who prefer to remain unnamed] pack whatever food is left at the end of their day and send it over.”

This usually ranges from biryani to keema and shami kebab, in whatever quantity these restaurateurs can muster for the day. “Sometimes, there is matar pulao for the vegetarians. And every evening, without fail, someone or the other manages to bring samosas and tea for about 2,000 people,” adds Rana.

“Food is usually brought in packets: about two or three puris in each pack, along with some sabzi or chole,” she says.

Since many of the protesters are mothers who cannot leave their little ones at home, there are chocolate bars and biscuit packets for the children. However, it is the tea that comes in most handy, particularly at night when temperatures drops. “The days, thankfully, are getting sunnier,” says Rana. #KhabarLive