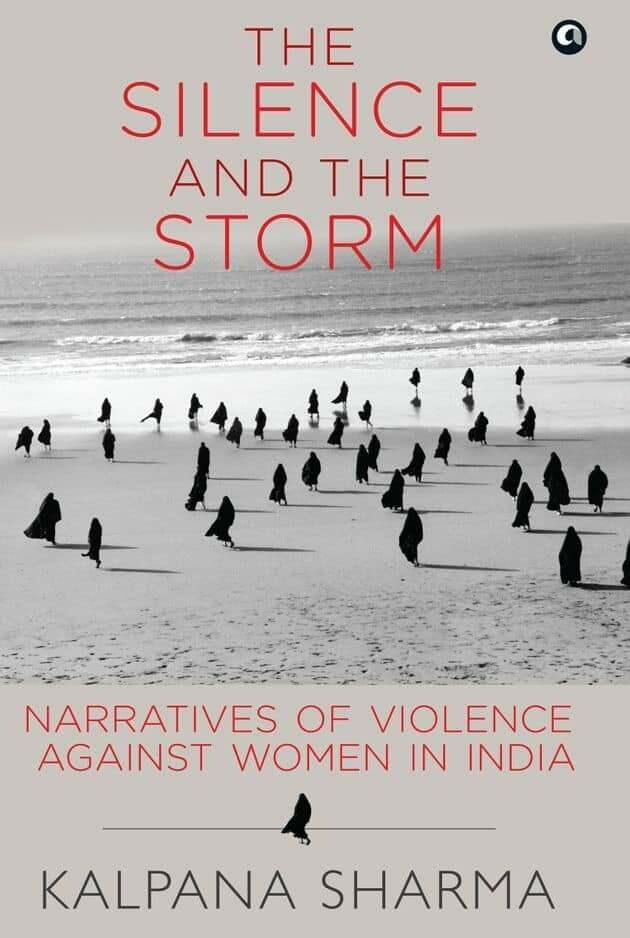 In ‘The Silence And The Storm’, the book author Kalpana Sharma looks at how societal structures that perpetuate and justify violence against women have remained the same over decades.

Even if laws are changed and strengthened, is it easier now for survivors to seek justice? There is no denying that the changes in law have been mostly progressive and essential. In each instance, they happened because of public mobilization by civil society groups that put pressure on the government to act. Not one amendment to the law concerning violence against women has been the result of lawmakers themselves recognizing the need to change it. Yet, the systemic problems in India’s criminal justice system that stymie even the most effective laws remain largely unaddressed.

For every case where there is a ruling, there are literally thousands that never come to court. In fact, the first hurdle that women must overcome is the unfriendly police station where if you are poor, you are never believed if you say you have been raped. Even special cells for women, and police stations with only women personnel, have not made a noticeable dent on this reality.

If somehow you go past that hurdle and get your case registered, the next step is equally harrowing, the process of undergoing a medical examination. Until recently, something called the ‘two-finger test’ was permitted in the medical examination conducted on a rape survivor. This was done by literally inserting two fingers into her vagina to determine whether she had been penetrated. If her hymen was broken and the fingers could be easily inserted, it was deemed that she was ‘habituated to sex’, a factor that was used against Mathura, the very first case that took on such a public profile.

Years of campaigning by women’s groups finally ended this practice officially. In 2013, the Supreme Court ruled that such a test violated a woman’s right to privacy. In 2014, the Indian Council of Medical Research (ICMR) recommended guidelines that prohibited the use of the two-finger test. These were part of the notification sent out by the Ministry of Health and Family Welfare to all states with guidelines for medical professionals on medico-legal care for rape survivors. As health is a state subject, these guidelines were not adopted uniformly as a 2017 Human Rights Watch (HRW) investigation into twenty-one cases of rape and sexual assault in India found. While in some states the two-finger test continued to be used, even in the nine states where it had been expressly prohibited, doctors were either ignorant about the rule, or continued to use it anyway.

The HRW survey also established that changes in the law brought about by the Criminal Law Amendment Act, 2013, were not implemented. For instance, refusing to provide medical treatment to a rape survivor, or the police failing to take down a complaint, had been made a punishable crime. Yet survivors continued to be denied medical treatment, and could not register their complaints. Poor, marginalized women in particular failed to get justice at the very first step of the process.

If on the basis of the testimony of the survivor, the perpetrators of the crime are caught, then the other part of the trauma begins. An illustration of this is what has come to be known as the Shakti Mills rape case. On 22 August 2013, less than a year after the furore that followed the gang rape in Delhi, and after the Verma Committee report led to a change in the rape law, a twenty-two-year-old photojournalist and her colleague were accosted by a group of men when they went to take pictures of an abandoned textile mill in Central Mumbai, a stone’s throw away from a busy railway station. The woman was gang-raped while her colleague was beaten up.

Luckily for her, even though traumatized—the rapists filmed the act—she had her wits about her. After the rapists walked with her and her colleague to the nearby Mahalakshmi railway station, where they issued dire threats that if they were to report the incident to the police, the videos of the rape would be released on social media, the woman decided to go immediately to the nearest hospital to get a medical examination. Changes in the law after 2013 established that any hospital, private or public, would have to attend to a rape survivor, report to the police and conduct a medical examination. Earlier, only public hospitals could do this.

The fact that she was a journalist, that her seniors came immediately to her aid as did other journalists, helped ensure that the police did not delay in moving on the case. The five men were soon arrested and charged. The case was heard in a fast track court and judgment delivered within six months.

It just so happened that when the news of this rape surfaced, another woman, an eighteen-year-old telephone operator, went to the police and reported that she had been raped by the same men months earlier in the same spot. As a result, the police charged three of the men, Vijay Jadhav, Kasim Bengali, and Salim Ansari under Section 376E of the Indian Penal Code that recommends the death penalty for repeat offenders. The three men were handed this sentence by the court. The fourth man, Siraj Khan, was given a life sentence as he was not involved in the earlier rape. And the fifth, a minor, was sent to a correctional facility. Although the three men awarded the death sentence appealed against it, on 3 June 2019, the Bombay High Court upheld the death sentence.

What the public did not know was the trauma this brave young woman, who knew the law, and took the necessary steps to seek justice, had to face. For one, even though the law clearly lays down that no hint of the survivor’s identity ought to be given, the media would not relent. The leading newspaper in Mumbai, the Times of India, sent reporters to the residential colony where the girl lived. They spoke to the neighbours and to the watchmen, neither of whom knew that a girl from the building had been raped. But once the media arrived, it did not take long for them to guess the identity of the survivor. Thus, the media directly colluded in outing her.

Worse still, a reporter from another newspaper climbed sixteen floors of a private hospital, where the woman was being treated, to try and get into her room to interview her. She was stopped by the police guarding the floor. What was the necessity of this kind of intrusion into the survivor’s privacy?

This has been the tragedy of the Indian media in the twenty-first century. It fails repeatedly to be sensitive to the problems that rape survivors face after they have been sexually assaulted and brutalized. In the case of the Delhi gang rape, media houses realized they could not name the woman. But they still wanted to pursue the story. Constantly describing her as ‘the twenty-three-year-old woman’ or something similar was tedious. So instead, some media houses gave her a fictitious name, something she had not asked for and for which her approval was never sought. So Nirbhaya, a name that has stuck, was decided by the Times of India while Damini and some other names also floated around.

It is surprising that few questioned the decision to give a fictitious name to a living human being without seeking her permission. Or dropping it and using her real name after she died when her parents went public with it. Till today, it is unclear whether her real name can be used. So the media sticks to the pseudonym, Nirbhaya, and the government too has adopted it to launch a scheme for rape survivors. I prefer not to use a fictitious name. I would have preferred to use her real name, especially as her parents are on record revealing it and pointing out that their daughter had not committed a crime, hence why should her identity be hidden. But the law on this remains unclear; the Supreme Court has reiterated that the identity of a rape survivor should not be revealed even if she dies after the crime. #KhabarLive

(Excerpted with permission from The Silence and the Storm: Narratives of Violence against Women in India by Kalpana Sharma, Aleph Book Company.)