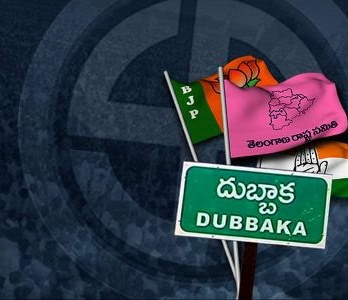 The BJP sprang a surprise at the Dubakka bypoll win stunned ruling party chief KCR holding the winning thump in Telangana. All political pundits views, analysts reports fallen down with this surprise.

The BJP”s victory in the Dubbak assembly constituency byelection in Telangana has come as a huge morale booster to the national party especially ahead of the coming polls to the city civic body and a wake up call to the ruling TRS.

After beating the ruling Telangana Rashtra Samithi (TRS) by a slender margin of 1,079 votes. BJP’s Madhavaneni Raghunandan Rao secured 63,352 votes after 25 rounds of counting, while the TRS’s Solipeta Sujatha secured 62,273 votes. Sujatha is the wife of former TRS MLA Solipeta Ramalinga Reddy, whose death in September necessitated the bypoll.

This is by far the most intense bypoll that Telangana has seen. It was a nail-biter throughout the day, with the BJP maintaining a lead in most rounds until the 14th one, when the TRS nosed ahead for the next seven rounds.

Later, the Telangana Rashtra Samithi (TRS) has lost its seat to the Bharatiya Janata Party (BJP) in the just-concluded by-election held for Dubbaka Assembly seat. Geographically, Dubbaka is surrounded by the Assembly constituencies represented by Chief Minister and TRS supremo K Chandrasekhar Rao (KCR), working president of TRS and Minister KT Rama Rao (KCR’s son) and Finance Minister T Harish Rao (KCR’s nephew). For sure, it is a loss of face for the TRS which has never lost its supremacy over its rivals either in a general election or a by-election ever since a separate Telangana was formed in 2014.

BJP leaders have been taken aback by the dignified demeanour with which KTR conceded defeat. KTR has said the party would introspect and work with more dedication and diligence to serve the people and do any course correction necessary.

In fact, the TRS has consolidated its political stranglehold over the state by going to polls a little earlier than scheduled, in 2018, by having the state Assembly dissolved.

From scraping through with a wafer-thin majority of barely three seats above the halfway mark of 60 in 2014 elections, it romped home with a thumping majority of 88 constituencies in a house of 119 seats and scaled up the number to over a 100, with some members from the Congress and the TDP swearing their allegiance to the TRS.

The TRS fought several by-elections — the Assembly seats of Narayanakhed, Paleru and Huzurnagar were wrested from Congress and retained Medak and Warangal Lok Sabha seats vacated by Chief Minister KCR and then Deputy Chief Minister Kadiyam Srihari — after Telangana was formed.

BJP, which performed poorly in 2018 Assembly elections by losing four of its seats and winning just one, however, tasted blood in Telangana by winning four Lok Sabha seats on its own in the triangular contests with the TRS and the Congress in 2019. The TRS had to be content with barely nine out of 17 seats, and its ally All India Majlis-e-Ittehaadul Muslimeen (headed by Asaduddin Owaisi) winning one seat. Since then, the BJP amplified its campaign against KCR-regime in the state. However, it could not come up with any substantive allegations that could spark off insurmountable doubt among people.

Congress has almost become a non-entity in the state with most leaders drifting towards the TRS. Gobbling up of Congress and emptying the opposition in the state, dealt a severe blow to the TRS because the BJP has begun to fill the vacuum. KCR, who is very devout and religious, has never lost sight of nursing the Muslim constituency. The state has in excess of 12 per cent of the Muslim minority voters. KCR has always kept Asaduddin Owaisi in good humour without bending backwards. However, the BJP began a vocal campaign that KCR is “pampering the Muslims”, surely with an intent to impress the Hindu vote bank.

ALSO READ:  All Indians Will Get E-Passport From 2021 Onwards

This aside, a couple of conspicuous mistakes have done in the TRS in Dubbaka. The choice of the candidate – the wife of the deceased MLA Solipeta Ramalinga Reddy, who won three times successively – was a calculated risk that the party chose to take, despite the infamy of the son of the late MLA. The result could have been otherwise had the TRS chosen Ch Srinivas Reddy. Reddy had instead crossed over to the Congress from the TRS as he was not nominated by the ruling party. He polled 22,196 votes (13.47 per cent). The BJP candidate M Raghunandan Rao won with a slender margin of 1,079 votes, defeating the TRS candidate Sujatha.

The TRS, which realised that the BJP was gaining ground, began a counter-offensive campaign and highlighted the seizure of huge cash, allegedly meant for distribution among people. This apparently elevated the confidence among the BJP cadres sending a message thta the TRS was wary of a potential threat from the BJP and not the Congress.

The signature style of the TRS has been to demonstrate its epicaricacy without any uncertainty. However, this time, the party gave kneejerk reactions before the elections.

Buoyed by the success, even by a slender margin — the TRS was expecting a majority of over 50,000 votes — the BJP has declared that it would repeat the “Dubbaka feat” even in the upcoming elections to the Greater Hyderabad Municipal Corporation (GHMC). The state BJP president, Bandi Sanjay, was congratulated by Union Minister Amit Shah and the Telangana BJP was lauded by Prime Minister Narendra Modi for winning the Dubbaka by-election, in a tweet. Of course, it would be overambitious on the part of the BJP to expect a victory in GHMC polls to lead the corporation. But it will give a tough fight.

The BJP will focus on Telangana for two reasons:

1) It has to contain KCR and restrict him to Telangana. KCR had talked about Federal Front — a non-BJP and non-Congress national alternative in 2018 itself. KCR has enormous patience and he believes in perseverance. He takes humiliation as a challenge. He can wait for any length of time to achieve his goal. The Telangana agitation glaringly exemplifies that he is not a man in a hurry. He has his succession plan in place in the TRS. KCR is an effective communicator and speaks fluently in Hindi and English. In a nutshell, he has the potential to emerge as the national alternative.

2) With the chips of the Congress being down, the BJP will nurse the political ambition to capture power in Telangana — if not in 2023, at least in the subsequent elections. It will work with that goal and try to spare no efforts to achieve the same.

Given this background, the TRS has already begun introspecting the reasons for the defeat as it strongly believes that sometimes you win, and sometimes you learn. #KhabarLive #hydnews