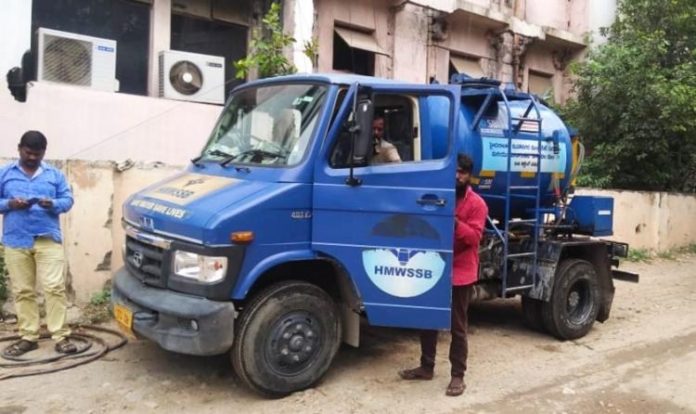 Hyderabad has achieved quite a bit with 136 mini sewer jetting machines, but a lot more can be done to ensure zero human intervention in cleaning clogged drains by top civic Hyderabad Metropolitan Water Supply and Sewerage Board (HMWS&SB).

As an instance, when a 28-year-old Srinivas, driver of the mini sewer jetting machine in Marredpally, Secunderabad hurries to the HMWS&SB office to collect the list of complaints which he has to attend for the day. The HMWS&SB office receives complaints through phone and online, including its mobile application.

After collecting the list, he immediately changes his attire and switches to the navy blue and neon coloured duty dress. Accompanied by his colleague Sampath, who is a helper, Srinivas fills water in the jetting machine to flush the clogged drains in Addagutta, a place within the HMWS&SB Marredpally jurisdiction.

Srinivas is one among the many drivers outsourced by the HMWS&SB who operate the mini jetting machines. Each vehicle has a driver and a helper. These machines are armed with a 2,300 litre water tank and a high-pressure pump.

Two years ago in June 2017, HMWS&SB had introduced 70 mini jetting machine vehicles in a bid to eliminate the inhumane and illegal practice of manual scavenging. Earlier, there were numerous complaints of the large vehicles’ inability to move through the narrow lanes of Hyderabad, and clear the choked sewage pipes, as a result forcing workers to climb down manholes to clean them manually.

Manual scavenging is a caste-based profession, which deprives workers who are mostly from the marginalized Scheduled Castes and Scheduled Tribes communities of their dignity. But the inhumane practice is often deadly, with many asphyxiating to death.

Manual scavenging was banned in India in 1993 after the Employment of Manual Scavengers and Construction of Dry Latrines (Prohibition) Act, 1993 was passed. Amendments to this Act were made in 2013 with a detailed definition of what constitutes manual scavenging.

With the aim of eliminating manual scavenging, the HMWS&SB which manages sewerage and ensures its upkeep in Hyderabad, introduced these jetting machines in June 2017. Pune-based Kam-Avida and Ahmedabad-based Manair engineering companies designed these machines, which cost around Rs 15 lakh. These machines are then assembled to vehicles totalling the cost of each unit at Rs 40 lakh. These vehicles can easily maneuver and flush out the filth in the choked sewage pipes. They are deployed in the core city area which spans 3,500 kms. On an average, it gets between 1500 to 2000 complaints.

Following the success of HMWS&SB, the Greater Hyderabad Municipal Corporation (GHMC) also has introduced 66 similar mini machines last year to clean the sewage pipes in the peripheral area of the city. These new vehicles have an add-on feature of suction. While the HMWS&SB vehicles just jet out water at a high speed, these vehicles have a suction pump that suck out the sewage and also flush the drains using water.

While HMWS&SB covers the main city, the GHMC operates these vehicles in the suburbs of Hyderabad – Kapra, Uppal, Hayathnagar, LB Nagar, Saroornagar, Rajendranagar, Serilingampally, Moosapet, Kukatpally, Qutbullapur, Gajularamaram, Alwal and Malkajgiri. Besides these mini 2,300-litre vehicles, the GHMC has 24 large jetting machine vehicles, while the HMWSSB has 46 such 6,000-litre machines.

HMWS&SB and GHMC have outsourced the job of cleaning the sewers. In fact, both bodies don’t own these vehicles, and it is taken on contract after a tender process. The departments, however, helped in arranging loans for contractors through State Bank of India. In turn, the contractors had to pay 10% of the total cost of the vehicle upfront. Each vehicle costs Rs 15 lakh.

The HMWS&SB and GHMC pay these contractors on a Running Meter (RMT) basis – the distance cleaned. Presently, the agencies pay Rs 11 per RMT. Following the introduction of these vehicles, authorities claim that they have eliminated manual scavenging, which the cleaning workers concur with.

“We do not enter manholes, we have been strictly ordered against it,” says Sampath. These mini vehicles are also armed with long sticks and a shovel with a long handle, which are used to clear the sludge and other waste blocking the pipes, before the jetting pipe is pushed down the drain.

“This is the only manual effort we do,” Sampath adds.

“We now have enough machines to clean the sewers, and there’s no necessity for humans to get into manholes,” says Prasanna Kumar, Chief General Manager, Engineering, HMWS&SB.

Expanding the definition of manual scavenging

As per the definition in the Act, “Manual scavenger” means a person engaged or employed, at the commencement of this Act or at any time thereafter, by an individual or a local authority or an agency or a contractor, for manually cleaning, carrying, disposing of, or otherwise handling in any manner, human excreta in an insanitary latrine or in an open drain or pit into which the human excreta from the insanitary latrines is disposed of, or on a railway track or in such other spaces or premises, as the Central Government or a State Government may notify, before the excreta fully decomposes in such manner as may be prescribed, and as expression ‘manual scavenging’ shall be construed accordingly.”

The Act under Chapter VIII, 33(1) also specifies that “it is the duty of every local authority and local agency to use appropriate technological appliances for cleaning sewers, septic tanks and other spaces within their control with a view to eliminating the need for the manual handling of excreta in the process of cleaning.”

However, Saraswathi points out that workers sometimes enter small drains and that those handling waste using shovels and sticks must also be defined as manual scavenging. “The contractors (employers) to finish the job quickly, coerce the cleaners to get into the manholes, clean them and flush the water,” she alleges.

While cleaning of the sewerages manually seems to have ended, ‘indirect’ manual scavenging is still continuing, according to reports. The GHMC is accused of employing humans to clear stormwater drains without providing any safety gear. These stormwater drains are filled with sewage as several residents have illegally connected the sewage lines to the storm drains.

“There should be zero human intervention in the cleaning,” Saraswathi argues.

Lubna Sarwat, a social activist from Telangana, says the definition of manual scavenging needs to be expanded. She says, “Not just manually removing excreta, even sanitation workers handling solid waste management should be treated as manual scavengers. The workers without any gloves are forced to carry disposed sanitary napkins. The government should crackdown on this, and strongly enforce waste segregation.”

“It is disgusting and horrible that workers who should be honoured for their work are treated this badly. Why can’t people think about their lives. Why should they pick up used sanitary pads with their bare hands?”

Heeding to this demand, the HMWS&SB has been experimenting with robots for the job. “We are conducting trials with robots, and are hopeful of finding a solution to address this issue,” says, Prasanna Kumar. The neighbouring states of Kerala, Andhra Pradesh and Tamil Nadu have already commissioned — Bandicoot — the robot to end manual scavenging.

Strangely, after the introduction of the mini jetting vehicles, complaints about drains being clogged have doubled. Following regular complaints from the same area, the HMWS&SB has identified 1,000 critical manholes. In a bid to address this problem, they are experimenting with cameras. “Many things are in the pipeline, we are experimenting with cameras which would be fit in the sewers, and authorities could monitor the levels of the sewage water from the office itself before the issue gets escalated,” Prasanna Kumar says.

Change should come from the people too

Magasaysay awardee and activist, Bezwada Wilson, convenor of National Safai Karamchari Andolan, says, “There should be complete mechanization and abolishment of manual scavenging. And mechanization is the not the end solution, it needed to prevent deaths, but our ultimate goal is to make it a dignified job opportunity. This attitude shift will take some time,” he says optimistically.

Saraswathi says, “The government has largely been successful in acknowledging manual scavenging as an inhumane practice and a crime. However, it is the people who are yet to acknowledge this. Many residents continue to hire poor people to clean their septic tanks manually. It is the mindset of the people which needs to be changed.”

She says that though the locals are now aware and refuse to get down the drains, owners of hotels and other residential apartment managements are hiring migrant labourers frequently. “Despite being aware of the danger, they get into the septic tanks and drainages because they don’t have any money or food to eat.”

According to figures revealed by the Social Justice and Empowerment Ministry recently, there have been 620 reported death cases of manual scavengers since 1993. Out of which 88 occurred in the past three years.

Compared to other states, Telangana’s reported cases of death are relatively low. Social Justice and Empowerment Minister of State Ramdas Athawale also disclosed that between 1993 and 2019 Tamil Nadu had the highest number of deaths due to manual scavenging with 144 cases, followed by Gujarat with 131 deaths. Telangana had two recorded deaths, the lowest.

“These are recorded cases where complaints were registered with the police. There are many cases in Telangana which go unreported because these deaths are not seen as something wrong. Most often the victims are shut down after getting a paltry sum as compensation from the accused,” Saraswathi notes.

The BJP-led government had in Parliament recently stated that 53,398 manual scavengers were identified across the country. However, there were no reports from any state or union territory about the conviction in the cases. Poor conviction in these cases has, in turn, emboldened the practice.

Speaking about the residents illegally employing people to clean septic tanks, Bezwada Wilson also notes, “Law enforcement is the only solution to it. If the government files cases against those offenders, the practice will cease to exist.” #KhabarLive