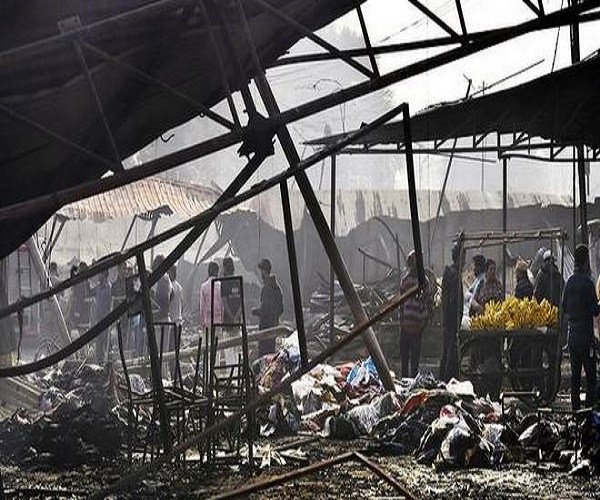 The fact that the Mission for Elimination of Poverty in Municipal Areas (MEPMA) stalls were built of non-combustible material was perhaps what saved it from the blaze which wreaked havoc at the ongoing industrial exhibition, or Numaish.

Recounting how the raging inferno, which gutted over 200 stalls, came close to the ones she was managing on that fateful evening, store in-charge G. Padma says, “I think it was because the 50 MEPMA stalls were made of iron, like an iron shed, which prevented them from being burned down.

ALSO READ:  A Jain And A Muslim Family Break Bread And Barriers Together In Meerut

The fire was right opposite us. When it came too close, those at the stall had no choice but to run out. The stall beside us had a plastic water bottle which melted and tilted it to one side. It was that serious.”

And when the fire showed signs of letting up, some of those who were present rushed in and began to salvage the material.

“There were clothes and other things there. But when we started to check what was left, we found dozens of material such as tops and other garments not burnt, but missing. We estimate the loss at ₹7.8 lakh,” Ms Padma says.

Despite the fire being put out, MEPMA staff and partners feared another tragedy was in store, given the presence of gas cylinders in the vicinity.

MEMPA and GHMC personnel, she recalls, stayed till 4 a.m. and ensured that no untoward incident took place.

Ms Padma says MEPMA mission director T.K. Sreedevi has asked officials to organise counselling sessions and heath check-ups for those who were present at Numaish.

“Even the spouses of those at the stall helped us to gather whatever material was left. It was a collective effort,” she says. #KhabarLive

ALSO READ:  'A Lawyer Has No Business With The Justice Or Injustice Of The Cause'