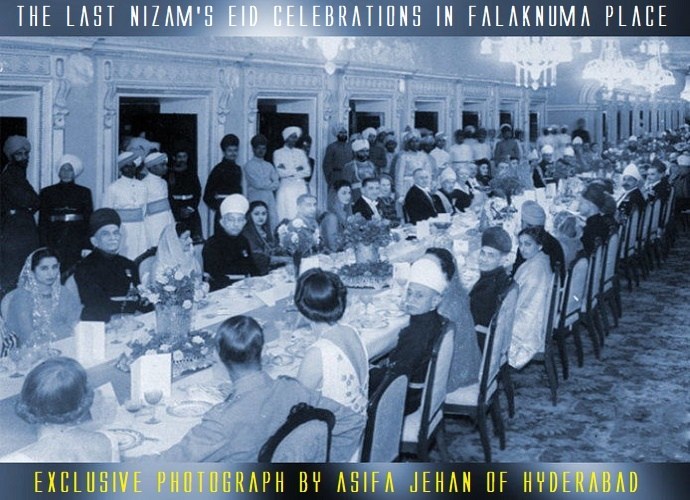 The glimpses of those days captured on mind by one of the oldest historian Asifa Jehan in Hyderabad while in a informal meeting at her residence at King Koti area in Hyderabad. She boggled her past and narrated in a weaken voice to #KhabarLive, recently.

“The night before Eid-ul-Fitr, on November 23rd 1938, my sister and I had mehendi on our hands. After a bath we had our hair dried with oudh ki dhuan. In the morning we dressed in new clothes, mojris and brocade topis and then set off early with my father to reach the Idgah near Mir Alam Talab by 10am. The grounds outside the wall of the Idgah were thronged with automobiles, and inside on the carpets in the shade of the qannats was a blur of strangers—and at least as many of my father’s friends.”

” Our family was not very observant, so my sister and I performed our prayers by copying. Afterwards we did the rounds, collecting idis from papa’s friends—coins of the realm in denominations from 4 annas to 5 rupees (a fortune). We continued the take back home, demanding our due from anyone older.”

” For Eid-ul-Fitr—mithi Eid—my grandmother would start making the sewiyan for sheer khorma weeks in advance, rolling dough on a huge board. But Id-ul-Adha—Bakhri EId—was of course the more spectacular culinary event. My father would dispatch six sheep when we returned from the Idgah and most of the meat would be distributed.”

” The skins were sent to the orphanage, and sometimes the orphanage band would come and play at our gates. From our portion of the meat, my grandmother would dry long strips to be roasted or fried later—it would keep forever.”

” The intestines would be cleaned and dried as well, to be fried up into delicious papad-like aanth. All day there would be an endless parade of guests and dishes coming and going. Before anyone left they would be given chikni supari and attar.”

” We didn’t know it then but in 1938 we had entered the final decade of life in the Nizam’s Dominions. Id is still a big occasion in Hyderabad of course but everything else has changed—don’t get an old Hyderabadi started on that! Even the idis were better…”

#KhabarLive asked her about ‘Eid ul fitr’ on those days, but she roamed in past and described on all Eids. She, even told about the methodology amd highness on Eid and its royal significance. She made some sort of sweets of Ramazan and asked our team to taste it. Its ‘royal sheerkhorma’, a blend of royalty and nizami flavours and taste. This is not an end… more we add under our project series ‘Historical Exploration’. #KhabarLive

ALSO READ:  Lost In The Romance Of Transforming 'Poetic Beauty' In 'Old Hyderabad'