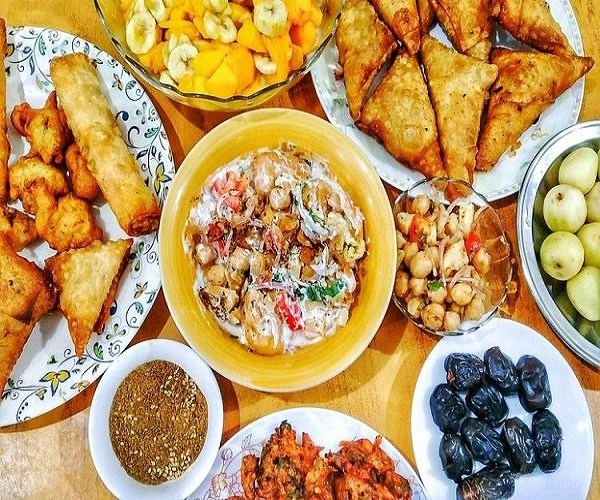 It’s Ramzan season and in the evening, as the entire city of Hyderabad makes a move back home, almost every Muslim stops to rejoice for a few minutes following the iftar sirens and adhans. Preparation for iftar begins hours before at homes and hotels.

As the sirens announce that it’s time to break the fast, workers at haleem stalls pack tin after tin at robotic speed with people queuing up in front of them, eager to begin their iftar feast with the rich and filling gooey dish. What follows are grand iftar parties where tables are laid out with dishes ranging from fruits, tiny samosas, mutton paaya, luqmis to biryani and phirnis.

For Inamur Rehman, a Hyderabad based historian, iftar continues to remain a simple yet spiritual affair. As the age-long tradition goes, he breaks the fast with khajur (dates), a sumptuous fruit salad and a fruit drink, preferably raw mango. He then goes to the mosque for prayers and returns home for dinner. But this tradition of maintaining a low-key iftar has long been broken. Iftar, from a simple enjoyable meal at home, has now become a grand culinary affair that sees food in all its glory.

The changing trends of iftar
Explaining how the iftar has evolved over the years, Inamur Rehman co-relates the food extravaganza to the increasing employment opportunities among the Muslim families in the city.

ALSO READ:  ‍Now, Get '‍Gold Jewellery' Delivered At Your Doorstep!

“If you compare the present day iftar to the ones a few decades back, the disposable income among the Muslims was low. So they traditionally used to stick to 3-4 items to break the fast, which included dates, fruits and a simple meal. But as years passed, a lot of Muslims started travelling to the Middle East countries which ensured a staple income for the families back in the city. What you see now is a direct result of the changing socio-economic conditions,” Rehman says.

Zarina Sha, owner of a homemade food delivery service, says that until two decades ago, iftar parties were unheard of. Families, especially women, put special efforts to ensure the meal was healthy and the food wasn’t wasted.

“Irrespective of belonging to a rich or poor household, iftar always included our extended family members. But no matter the number of people who gathered at our homes, the women in the family ensured that not a single morsel of food was wasted,” Zarina says, adding, “The Ramzan fast strives to purify ourselves and increase our taqwa (good deeds). Food, unlike today, only meant to provide strength to keep the fast going for the next 30 days.”

As the economic conditions of people improved, their eating habits changed. Fruit juices began to be replaced with cool drinks and fruits with fried snacks.

“Iftar has changed drastically over the years. Iftar, until a few years back, was more about serving the poor. And the left hand never knew what the right hand did. But now as the purchasing capacity of people have improved, iftars have turned into a pretentious affair,” Imran, a 34-year-old food critic, says.

“Iftar takes a toll on our bodies, especially during the summers. To avoid dehydration, we break the fast with dates and drink juices from fruits depending on the season. People can ideally then eat fruits or some fried savouries. But contrary to the traditions, haleem has now usurped the place of all the usual iftar dishes,” Imran adds.

An Irani dish which is now an iftar-favourite
Haleem, which is traditionally an Irani dish, has taken the place of Hyderabad’s most savoured dish after biryani. As food critic Sankalp points out, haleem, which was served only during the 30 days of Ramzan fast, is now available throughout the year in the city.

“Haleem used to be an exotic food which was made in small quantities at homes during Ramzan. It didn’t have the centrality it enjoys today. Made with pounded mutton, it was a day long effort to prepare the dish. Rich in protein, people began breaking the fast eating haleem, considering it to be an ideal supplement.

But that said, the additional spices and the fat in the dish are not ideal for a stomach that has been starved. But with the easy availability of haleem in every nook and corner of the city now, hotels are heavily monetising on the dish. The haleem phenomenon, especially its monetisation, is less than a couple of decades old,” Sankalp says.

The iftar tables traditionally contained a mix of fruits, drinks, dahi bada, luqmi (another savoury) haleem, mutton paaya, nahari (a soup like mutton dish), biryani, and desserts to mention a few. But very few in the present generation may have heard of delicacies such as kachaloo or abbshola, which were traditionally used to break the fast.

“Kachaloo is a simple, traditional dish made by mixing diced guava with salt, lemon juice, black pepper and sugar. All Ramzan dishes were made with hand-ground spices and masala. Abbshola was made with raw mango. There wasn’t a particular recipe as it could be any particular dish made with a concoction of raw mango. Buttermilk laced with pudina or curry leaves were also very popular. But as our lifestyles are changing and people have got used to instant gratification, the traditional iftar dishes are slowly losing their essence,” Zarina adds. #KhabarLive