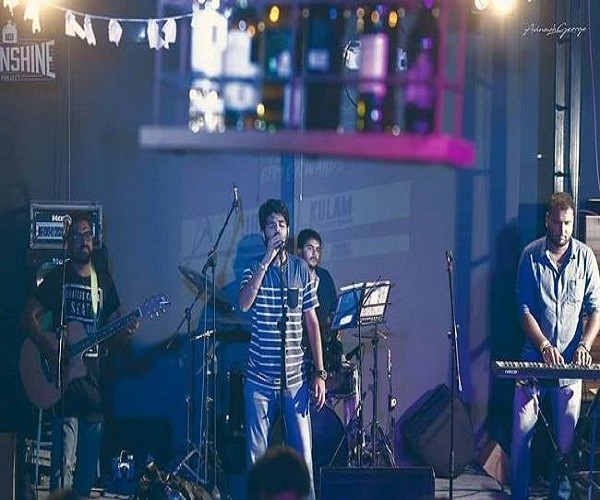 Music bands in Indian cities are no longer about classic rock, head-banging or even the incomprehensible lyrics. There is a new genre that has emerged – the local regional music. With it, a new breed of musicians is striking the right chords.

Even though Bollywood music still captures most of the limelight and rakes in cash, Telugu songs and covers are slowly turning into a rage among the city pub-goers, giving new platforms to wannabe musicians to sing aloud their favourite ARR or Illayaraja melodies with a twist.

Four-five years ago, when disc jockeys (DJs) were popular and live music wasn’t a thing, a bunch of youngsters, aspiring to change the live music scene in Hyderabad, came together with a revolutionary flavour to the music. Capricio, one of the first local music bands in Hyderabad, has some of the most sought-after musicians in the city today.

They are melodically filling the gaping gap in regional music with their soulful renditions of Telugu songs.

Members of Capricio
“Capricio was formed officially in January 2017. Prior to that, we used to post videos on social media platforms, which got us a lot of followers. It was first of its kind as no other bands in the city then used to perform Telugu music. In fact, the Moonshine project gave us the first opportunity to play live music and it turned out to be a big hit. A few months down the lane, we were able to gauge what our audience liked about local music and we began improvising according to their taste,” Anurag, a member of the band Capricio, tells #KhabarLive.

Where it all began
“A couple of years back, no event manager was particularly interested in regional music except for one or two bands that used to perform in the city occasionally,” Krishnan Ganesan, one of the main vocalists from the band Niraval, tells #KhabarLive.

“But maybe a year ago, when things started blooming, we had places such as Tabularasa and Moonshine that encouraged local bands. This attracted huge crowds, with even celebrities attending the shows. People even started putting up Instagram stories. So, initially, most of our organisers were the real people who came to our shows and wanted us to play at weddings and birthday parties. And it’s from there that things started taking a new turn,”Krishnan says.

ALSO READ:  First In The Country, A 'Dalit Girl' In The Race Of 'Presidential Candidate' Of UoH Student Union Elections On October 5

Band Niraval
For the bar-hopping crowd, Tabularasa, Hard Rock Café, Moonshine project and Heart Cup Coffee are some of the common addas in the city to spend a leisure weekend. And these are also some of the first few platforms that opened its doors to the local music bands, making them a favourite among the crowd.

Talking to #KhabarLive, Omkar, manager of the Hard Rock Café, recalls the first time Capricio performed at the bar. “We had heard of the band owing to its huge popularity among the crowd. We decided to call them on board for a performance and were totally taken aback by the sheer number of people that turned up for the concert. From then on, Capricio has been a regular at our cafe since the last four months,” Omkar says.

The scene then and now
Over the course of a year and a half, Capricio has become a name to reckon with in the city. “When we started out, we began with a lot of Bollywood music and just a couple of Telugu songs at each concert. At the time, the scene was completely dominated by English and Bollywood songs. We started on the same note, but slowly started including Telugu in our playlist,” Anurag says.

Today, Capricio is largely known for its mesmerising Telugu covers, concocting a new-found likeness for regional music among the audience.

Krishnan says that the whole idea behind starting a regional band was about reviving the lost sound of the region.

“The word ‘regional’ never existed until late 2017. Back in 2015, Niraval started off as an open mic band playing at The Moonshine Project’s concept Varnam, a platform where regional and folk music are given a stage, thus letting people go back to their roots and cherish music in their native tongue. Niraval is now a fully-fledged band churning contemporary Indian melodies and originals with a Tamil-Telugu duo,” Krishnan says.

Evoking nostalgia
So what exactly is making the crowd thump their feet and hum along the local melodies, making the uber cool DJs, creating the perfect mash-ups for every occasion, look like a thing of past?

“It’s nostalgia,” says Shashank, member of the band Jammers. In what was initially formed as a college band, Jammers today is one of the emerging regional music bands in the city.

“We regularly perform at the Moonshine. And it’s mostly AR Rahman and Ilayaraja that people like listening to. We are also composing a few originals, which we plan to release soon, but the audience mostly likes to listen to songs that they are familiar with. Most of today’s young crowd have grown up listening to these masteros. We make a medley of their songs as that appeal to the audience more than just one whole song. Until a few years ago, pubs and bars only had DJs. But now that live music is catching pace, people love listening to Telugu retro, which in a sense, evokes nostalgia,” Shashank says.

Jammers
Rahman and Ilayaraja melodies have swept stages and bands openly confess their love for performing the masterpieces on stage.

“As a band, performing AR Rahman, Ilayaraja and Keeravani live is an honour for us and the way people react to such music is a bliss to watch. One can now see the urge and interest among people to go out on a Wednesday to listen to the regional band and call it a night afterwards. This is what we envisioned when we started performing songs in the local language,” Krishnan says.

“The audience now do not hesitate to request for Telugu songs. If you do not play Telugu songs in Hyderabad, where else will you play it?” Shashank asks.

YouTube videos to performing gigs
Most of the local bands owe a chunk of their popularity to the influence of social media for popularising the genre of regional music covers. Unlike a couple of years ago, when music was not even considered a legit profession, people now recognise the groups as regional bands and respect the profession.

“Music bands have always been synonymous with English songs. Until a few years ago, people either turned up at the pricey concerts or tuned to the television to listen to regional music. But after the advent of the internet, it has become very easy to shoot a music video and simply upload it on any social media platform. Responses are instantaneous and you might become a star overnight. This has in fact given impetus to many aspiring musicians to be in the limelight and pursue their passion,” says Kenny, manager of the band Threeory, a progressive rock fusion band, also popular for their Telugu covers.

Members of band Threeory
While the members of Jammers are the alumni of the CBIT College in Hyderabad, Krishanan Ganeshan was a principal engineer in a hedge fund technology company and also an aspiring racquet sports champion. His colleagues Sweekar Agasthi is an audio engineer while Sagar Ramchandruni is a professional guitar teacher and a pet lover.

“People didn’t consider music as a career then, but today, its popularity has skyrocketed owing to their familiarity with the musicians and their songs on social media,” Kenny adds.

While many bands have begun composing originals, most of them have carved a niche and are regular performers at venues across South. “I am not sure till when the trend would continue, but I would not be surprised to see every venue playing regional music in the next few months. This is the case with most venues already,” says Krishnan.

“We want to play regional music all over the country. We want to write our own original songs in Tamil – Telugu and release an independent album and make this concept popular across the country. All cities should start playing their own regional music. That’s our vision and we are working towards it,” he adds. #KhabarLive