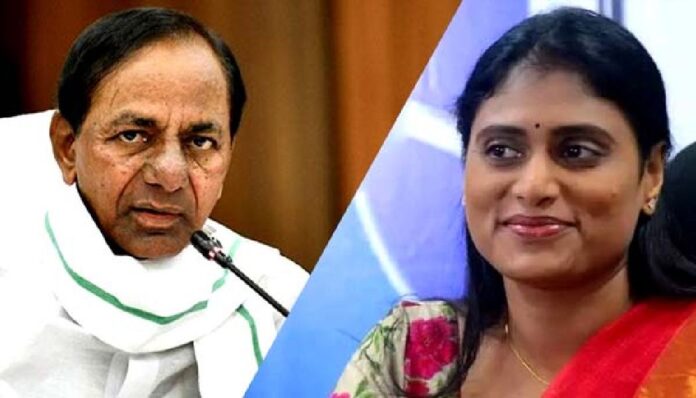 The political equations and dynamics in Telangana politics may allow the new game changer at this crucial time, where Telanganaites need a change.

The rise of YS Sharmila may change the sequence of political mantle of TRS and other parties as she is fighting for public demands and showing more concern to it. This is the point public pulse, where always people win on sympathy and wave of change.

Notwithstanding the questions being raised about the credentials of YS Sharmila, daughter of former combined AP chief minister late YS Rajasekhara Reddy, to launch a party in Telangana, TRS supremo and Chief Minister K Chandrasekhar Rao, hemmed in by certain newer political equations in the state, may allow Sharmila to rise in Telangana!

This is the assessment of those who know about the foresight and sagacity of an experienced leader like KCR, who seems to be intent on hitting a hat-trick as CM! Despite his credentials as a person who had successfully spearheaded the movement to achieve separate statehood for the Telangana region, he is now feeling considerable heat to move forward in his dreams of achieving Bangaru Telangana due to the concentrated efforts of the Congress and the Bharatiya Janata Party.

Although many leaders of the Congress switched their loyalties to TRS for understandable reasons, the cadre of the grand old party and some of its leaders still nurse hopes of a bright future. The BJP too, is moving heaven and earth to make its presence felt in Telangana well ahead of the 2023 General Election. So, KCR may prefer realignment of social equations to upset the apple-cart of the opposition parties. This explains why he may not be averse to allowing the yet-to-be-born party to rise on its own. That political outfit is going to be launched on 8 July, 2021 at Khammam.

If YSR were to complete his second term as head of the Government of AP, he would have become the longest serving chief minister of AP. Unfortunately, YSR lost his life in a helicopter crash in just four months after he began his second stint as chief minister. Now Sharmila, professedly bearing her father’s legacy in Telangana, has been raising questions about unemployment in TS. Her hunger strike for 72 hours on the issue indicated that she has arrived on the political firmament in Telangana.

Since Sharmila is a leader from the Reddy community, her focus is to pander to the interests of the community which for long was considered the ‘ruling caste’. The same Reddy community has been the backbone of the Congress party unit in the state for decades and its traditional vote bank.  What would happen if the Reddy community owns Sharmila and sails with her till the elections?  It would impact the Congress’ vote bank and be a big jolt for that party, though it expects to be in power next time.

The Congress strongly believes that people of Telangana know well who granted statehood for Telangana, despite stiff opposition from people in other regions. It believes there could be gratitude towards the Congress on this score.

YSR Congress party, which is in power in Andhra Pradesh, is silently watching the happenings in Telangana with regard to Sharmila’s party. There could be perfect understanding between the Chief Ministers of Telugu States in view of the political interests of both. Due to that proximity only Jagan could not pass any adverse comments on his sister’s political party. His party had categorically stated that there will be no relations between the parties of brother-sister duo.

Jagan had previously impressed KCR by handing over AP’s share in the Secretariat buildings with a single stroke of pen. He has not pursued funds worth thousands of crores in the form of power bills that are yet to be paid by TS. YSR Congress party has wound up its political activities in Telangana because of its relations with KCR.

Noticeably, the president of YSR Congress party YS Vijayamma has been participating in the political activities of Sharmila. Some say it would politically benefit TRS, given the goodwill earned by YSR. This will come in handy for Sharmila to impress the electorate.

If the TRS manages to distance the Reddy community from the Congress, or prevent it from going towards BJP, it would create a favourable situation for the TRS to register a hat-trick in the next elections. The past glory of YSR and the present influence of Jagan as Chief Minister of the residuary AP would actively work to make the Reddy community fall in line.

The Velama community, to which KCR belongs, has attained ‘ruling caste’ status following bifurcation. Earlier Jalagam Vengal Rao, another leader from the same community, ruled the undivided state for five years with the blessings of the Congress high command and the Emergency situation came in handy for him to continue in power for such a long period.

The Velama community has large-scale land holdings and capacity to influence society, despite constituting just 2% of the total population.  The Reddy community is capable of unseating KCR by supporting Congress or BJP. TRS has to avert such a development, which could be politically dangerous for it.

That is perhaps why the TRS has not been reacting strongly to the activities of Sharmila and has maintained eloquent silence on Sharmila’s self-talk of becoming chief minister of Telangana after two years.

In any case, Sharmila ‘s Andhra roots are always there for the TRS to tackle her when the time comes.  The anti-Andhra sentiment is a powerful weapon in the hands of TRS to influence the Telangana people. This was proved during the 2018 elections.

The BJP too implemented a similar formula at national level by raising the nationality of Congress chief Sonia Gandhi for years, though she became Indian citizen decades ago. Likewise, the anti- Andhra sentiment would be a potent weapon in the hands of TRS in Telangana even in the months to come. #KhabarLive #hydnews